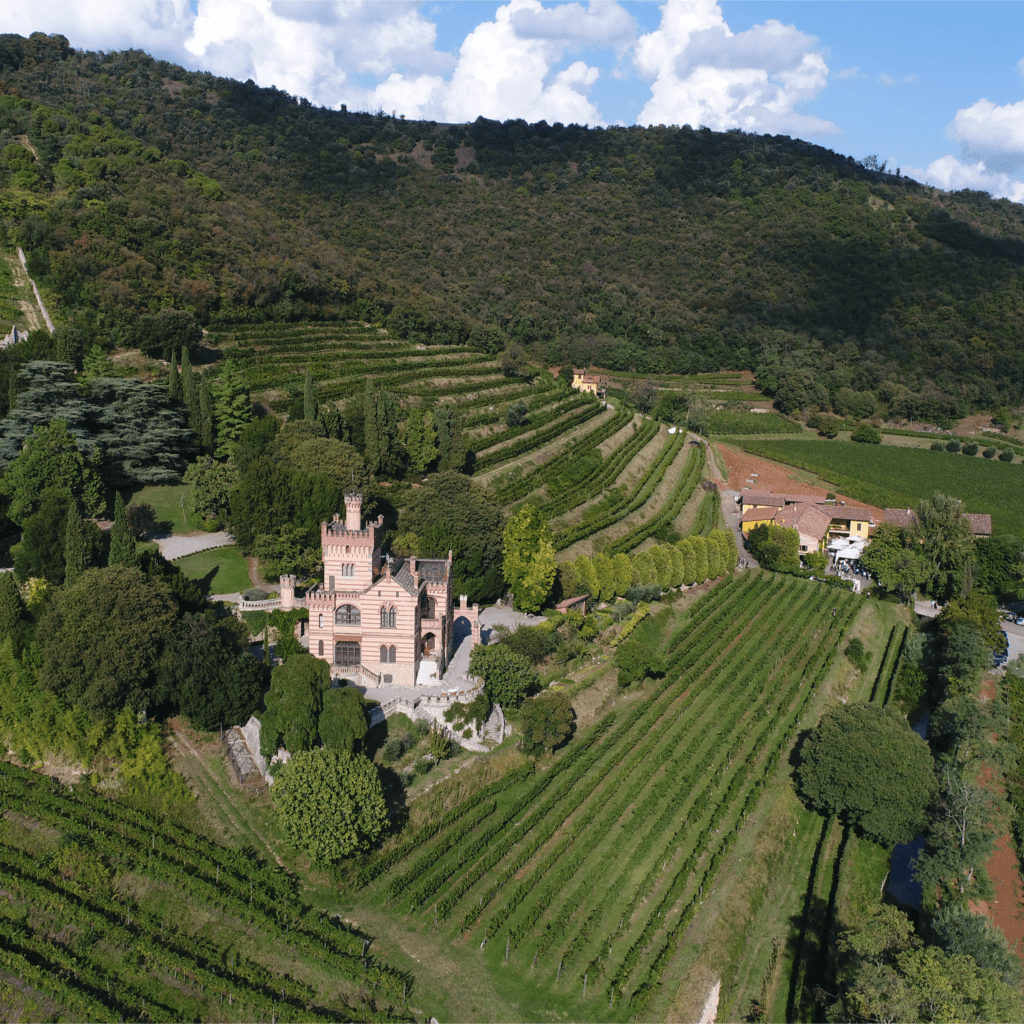 About 800 years ago, the Ricci Curbastro family started growing grapes and a few decades ago they started producing great wines that would change the way sparkling wines are regarded on the world stage.

I recently had the chance to travel virtually with the Ricci Curbastro family to visit the region of Franciacorta in Lombardy, about 2 hours east of Milan, along the shores of Lago Iseo, one of the 5 great lakes of the region.

The grapes used are the same as in Champagne and the process is also identical: double fermentation in the same bottle. The end result is a stunning wine and a dead ringer for Champagne.

The Ricci Curbastro family began bottling wine in Capriolo in Franciacorta as far back as the 1800s. In 1967, the Franciacorta D.O.C. was created. Ricci Curbastro has 32 hectares covered in vines and makes about 200,000 bottles a year.  The family also has an agritourism and a wine museum on the property named Villa Evelina. Ricci Curbastro also owns a winery in Emilia Romagna where they produce still wines.

For the past 12 years Riccardo has been President of the Federation of DOC’s of Italy, where he has devoted his tenure to creating a database that will ultimately allow consumers to find the real origin not only of the wine they are drinking, but the vineyard the grapes came from. I’ve had a chance to talk about Franciacorta wines and explore the beauty of these wines in the past.

I loved how they described how we all couldn’t be together right now, but how they wines served as a “postal card from Italy showing the beauty of the region from a glass of wine.”

The Ricci Curbastro estate practices organic farming and is it has been among the first nine companies in Italy and  first in Lombardy, certified as a “Sustainable Winery” for its commitment in environmental, economic and social terms according to the Equalitas standard, which it received in 2017.

We tasted five wines – four from the region of Franciacorta and one still red wine from the Emilia-Romagna region.

NV Ricci Curbastro Franciacorta Brut — a blend of Chardonnay (60%), Pinot Blanc (30%) and Pinot Noir (10%).The wine is aged 38 months and the contact with lees gives it a yellow color with notes of yeast, flowers, fruity notes and freshly baked bread.

NV Ricci Curbastro Franciacorta Saten – this wine consisted of 100% Chardonnay fermented in oak barrels that underwent a total of 48 months aging. This wine had notes of fresh baked croissant, yellow fruit, jasmine and a great minerality.

NV Ricci Curbastro Franciacorta Rosé – This was a blend of Chardonnay (80%) and Pinot Noir (20%). It had aromas of black cherry, herbs, strawberry and floral notes.

NV Ricci Curbastro Santella del Grom – This was a single vineyard blend of 30% Cabernet Franc, 12% Camenère, 20% Cabernet Sauvignon, 28% Merlot and 10% Barbera. The wine was aged 18 months in oak barrels, plus an additional year in bottle. It had a silky texture and notes of dark berry, herb and spice.

We departed from Franciacorta and also tried the 2016 Colli di Faenza Sangiovese, from the Emilia-Romagna wine region of northern Italy, which was created in 1997. This wine had notes of cherries and currants, dried flowers, and a finish of mineral notes with big tannins. Unfortunately, I had to leave before this wine was discussed on the call, but it was a complete departure from the style we tried previously.

It’s fun to see a family who after 800 years continues to develop the tradition, history and culture of DOC and regions with a continued path for excellence.