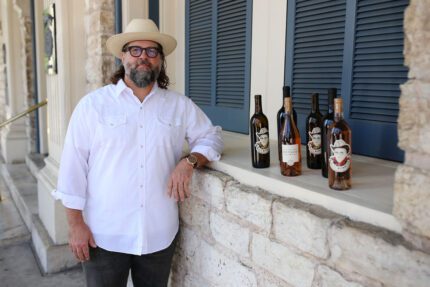 While working for a wine distributor at Glazer Wine & Spirits (now Southern Glazers) in Houston, Randy Hester’s boss put him up for a significant promotion. When it didn’t happen, it put him on another path to make some of Napa’s top cult cabernets and later founded C.L. Butaud, one of Texas’ up and coming wineries and began his journey to get Texas recognized for making world-class wines.

While selling wine, Randy struck up a friendship with Rick Nabors of Flat Creek Estate.  Rick showed him, through his wines, what Texas was capable of if the right grapes and land decisions were made back in 2004.  He told me there were great Texas wines, but they were hard to find.  So in 2006 when the promotion didn’t happen, he and his wife, Brooke, picked up and moved to Napa so he could learn how to make wine.  “If I could learn at a high level, I could come back to Texas and try to raise the bar,” Randy said.

At age 36, Randy quickly landed an internship at Cakebread Cellars where he made $12 hour at harvest and began to take enology and viticulture classes at Napa Valley College.  After that harvest, he was hired full time, and also began to learn the winery business.  During that  time, he worked with some of the top wineries like Colgin Cellars, Realm and Caldwell Vineyard under cult cab legends like Andy Erickson, Michel Rolland, and Helen Keplinger.

This was all part of his two year plan.  By five years, he was fulfilling his plan of making his own California wine label, Lightning, where the love affair with Grenache began.  But he had a bigger plan for ten years and that was taking the lessons he learned in Napa Valley and translating them to traditional European wine styles he knew would work well in the Texas High Plains and Hill Country on Texas soils.  And then he announced the news he was coming home to Texas.

“So many people questioned that decision.  I was so close to taking on a top winemaker job,” he said. “Andy Erickson sat me down and asked what I was thinking?” 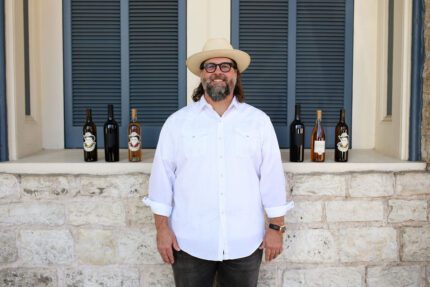 In 2017, Hester moved home to Austin and started C.L Butaud.  It was named after his great-grandfather: Clet Lewis Butaud, a Texas oilman known as “Papa Frenchie” who was known for his French heritage, kind heart and colorful language.  There were no cabernets, it was all about French Rhône, Spanish and even Italian varietals.  Basically, he makes the wines that he likes to drink.

We tried three wines in our tasting:

2020 C.L. Butaud Ramato Skin Contact Pinot Gris –This vintage, he introduced the ancient ramato style of wine from the Friuli region in Italy, where pinot grigio grapes are left in contact with the crushed pulp to achieve a coppery hue.  The extended skin contact produces wines that are savory in texture, enhancing both varietal character and soil expression.  There was so much going on here and it evolved over the days I tried it with notes of tomato leaf, prosciutto, apricot and just about everything in between.  Randy described it as a “charcuterie plate in a glass” and I agreed completely.  That is a good thing, I promise.

2020 C.L. Butaud ‘Papa Frenchy’ White – this tribute to the winery namesake was a blend of 50% Roussanne and 50% Muscat Blanc from Farmhouse Vineyards.  It had notes of flowers, pear, lemon, tea and was round and full with a nice acidity.  The label was done by DEERDANA, a famous pop culture artist that sketches artwork of people she’d like to have dinner with.

2019 C.L Butaud Desert Willow Vineyard Grenache – this could become one of the signature grapes of Texas.  It was a beautiful grenache with notes of cranberry, raspberry, pomegranate, nutmeg, spice with a nice plushness.

I loved that Randy took a world-class approach of going to Napa, going to school, seeking and working for some of the top wineries and winemakers and then bringing knowledge and experiences back home to raise the level of Texas wine on the world stage.  He’s on the path to make his mark on weaving Old World style wines as part of the DNA of the Lone Star state.

Next steps are doubling production, building a winery and continuing to do things organically.  I have no doubt that he’s on track for the next phase of his master plan.