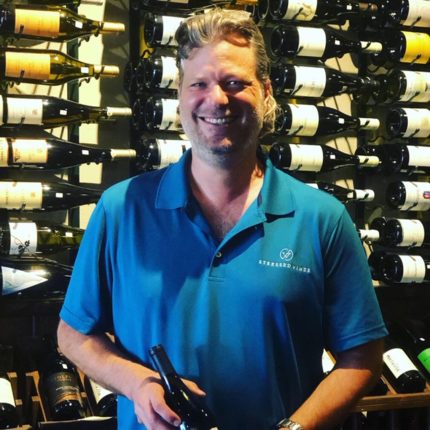 For Rob Barney, Stressed Vines’ Vintner, drinking wine was once a “safe label” choice.  He relied on labels, scores and brand name producers. In 2014, he decided it was time to expand and be more adventurous.  Little did he know that would take him down a path of making his own wine.

His journey took him to one of Dallas’ top wine bars, Veritas where he struck up a friendship with a staff member who taught him to embark on a journey to find out what wine he liked and why.  He also discovered how terroir makes a difference and had the chance to work harvest for two weeks at the Furthermore Winery in Graton in the Russian River Valley in Sonoma.

Rob still had the idea in his head that he had to retire and buy a vineyard to become a winemaker. But a side conversation with his friend, Ted Weisser, Winemaker and Partner of Satyre, convinced him that he could buy fruit and do this today.  So he did.  He worked with consulting winemakers like Erica Stancliff, Winemaker for Trombetta Family Wines and Furthermore Winery, as he learned his craft.  He also began to seek out great growers for his wines sourcing grapes in elevated places and soils that are known for being “stressed vines,” hence the name of the winery.

Rob told me, “Stressed vines make the best wines. The harder the vine works to produce fruit, the more vibrant the flavor, the more balanced the acid, and the smoother the tannins will be.” 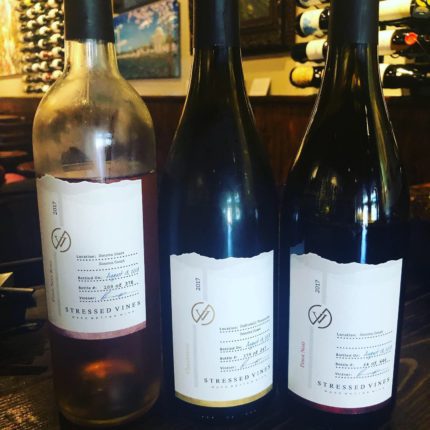 We tried three wines from Rob’s first vintage and I was impressed:

2017 Stressed Vines Indindoli Chardonnay – an Old World style Chardonnay that was from the Indindoli Vineyards in Sonoma. I tasted notes of stone fruit, lemon curd, jasmine, brioche and butterscotch.

2017 Stressed Vines Pinot Noir – this was an Old World Pinot Noir sourced from a single vineyard nestled in northern Sonoma County and Rob described as a “cab lover’s Pinot Noir”. I tasted bing cherries, cranberry, Asian spice and earth.  His description is spot on.

I always love when I hear about the “aha moment” that inspires a wine lover’s journey with wine. Usually it doesn’t inspire most of us to start a wine label.  I love how one man’s quest to discover his own palate led to a journey that resulted in delicious wine that can be enjoyed by all of us.