Is A Texas Winery On Par with A Bar?

For a winery, navigating how to proceed in a pandemic world is as clear as reading tea leaves to find out one’s future – especially in Texas.

Since March, Texas wineries have been told to shut down, reopen and then shut down again while restaurants, some which have a lot less open-air space, have been cleared to open. For a brief period of time, when the second edict was issued on June 26 for bars “and establishments that held a TABC permit and were not restaurants” to close, it was open to interpretation. Based on conversations that State Representation and Agriculture Chairman Drew Springer had with the governor’s office and state representatives, it was his understanding that if wineries followed health and safety regulations, they were clear to open. On June 27, the Governor’s office and TABC made their position abundantly clear – wineries were not to open.

How could winery tasting rooms, often located outside on expansive vineyards, be judged in the same vein as a closely packed bar?

It made no sense to Patrick Whitehead, Managing Partner of Blue Ostrich Vineyard & Winery and President of the Texas Wine and Grape Growers Association (TWGGA). “The growers and agriculture sector originally took the stance that this could never be us,” he said. “In March it was different, we had a sense that we were all in this together when restaurants, retailers, churches and wineries were closed. But to single out tasting rooms and group them in the same category as a nightclub, makes no sense.”

And amongst crushing losses to an industry that brings in millions of dollars to the Texas economy, is a tourist destination and has more than 500 wineries, the TWGGA has waged a campaign to differentiate.  It’s taking a defensive stance and getting consumers (over 10,000 so far) and legislators to stand up and make their voices heard to a Governor that keeps a very tight circle of people around him. Texas Agriculture Commissioner Sid Miller also sent a letter to Governor Greg Abbott asking him to allow wineries to operate. But still no change.

Patrick said, “People come to a winery for a different reason they come to a bar. Most of us are located in the country and the behavior is different – they have a tasting, maybe they share a bottle, make a purchase and they are on their way.”

He talked about wineries that have already made investments in sanitation, social distancing, have required masks for all staff members and will pledge to do all of those things and help with contact tracing due to their reservation systems. He also talked about the personal economic impact of not being open 11 weekends (Blue Ostrich is only open Thursday-Sunday).

“Sure, we were able to sell wine to go, but think about the connection of wineries with the agriculture world. I have to tell grape growers in August and September I’m not sure if I’ll be able to write that check,” he said. “We have no idea when we can open again. Not to mention telling our team that they can’t come to work, but it’s okay to drive to Gainesville, go to Chili’s and order a pitcher of beer.”

We then talked about Blue Ostrich Winery & Vineyard. The family-owned property was once a top ostrich breeding and ranching facility that was started in 1966, morphed to growing grapes in 2010 and making wines several years later. Patrick described the building that hosts the winery, tasting room and offices as once being filled with incubators of ostrich eggs and chicks. On property, they grow Tempranillo, Viognier and Cabernet grapevines and source the rest from a variety of their sweet and dry wines from a variety of High Plains growers. Patrick, his wife, Julie, and his daughter, Presley, are all integral parts of the business. You can also still see the homage of their heritage on their label and there are still three ostriches running around the property.

Patrick said he likes to think of his wines as uniquely Texan and all labeled Blue Ostrich come from Texas grapes. However, since there is only a finite amount of those grapes, the winery created another label, Full Quill, that does bring in grapes outside of Texas and are labeled accordingly. 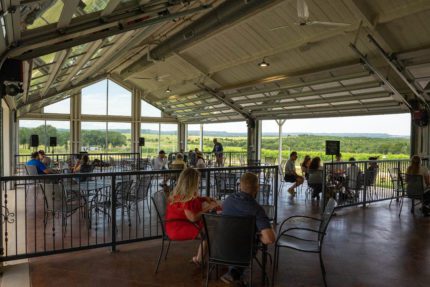 Since I couldn’t visit, I asked Patrick to describe to me what I would experience.  He told me about a large patio covered with drop down glass garage doors that overlook sweeping vistas of the vineyard and the Red River Valley. 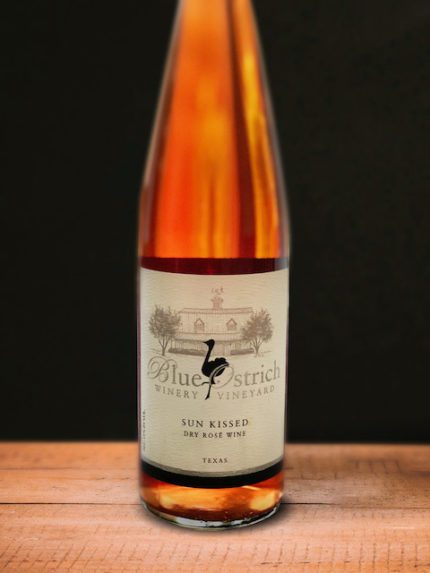 I opened the 2019 Blue Ostrich Sun Kissed Dry Rosé from estate Tempranillo grapes and tasted notes of roses, ripe strawberries, watermelon and a hint of citrus.  Nice and refreshing on a 100 degree day.

In uncertain times, please support your local wineries by ordering wine – whether it’s through shipments (with ice packs of course), pick-ups or by joining local wine clubs. They need your support now more than ever.