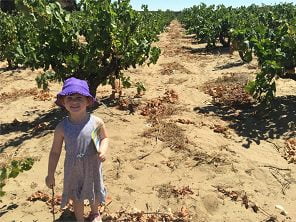 Looking from San Francisco “across coast” into Contra Costa County is a lesson in history. It’s what happens when hundred-year-old vineyards of plantings of Zinfandel, Mourvedre and Carignane collide with urban development that refuses to be stopped. When the average price of land today (according to Land Watch, is $2 million and there are $241 million of farms, ranches and land for sale, it takes a Herculean effort to preserve the source of these delicious wines. Today, there are more than a million residents colliding with the battle to save some of California’s premiere old vine Zinfandel vineyards.

Contra Costa County is an AVA directly east of San Francisco Bay in California’s Central Coast AVA and Contra Costa means ‘opposite shore’ in Spanish. Prior to Prohibition, Contra Costa County was booming with vineyards. During this time, these growers were forced off their land and other more profitable orchids were planted in their place or they migrated into Napa and Sonoma Counties. Compound that with the fact after the railroad connected with the eastern states, many grape growers sold their land back in the ’80s and ’90s to housing developers, big box stores and fruit farms.

The terroir features old vines planted 100 years ago combined with deep, sandy soils that are free-draining produces thick skinned berries that yield many legendary Zinfandel vineyards. And, there is a legion of pioneers in Zinfandel who are fighting to save them as the vineyards lose the battle with urban growth.

These winemakers who all have their place in putting California Zinfandel on the map talked about the special sense of place and how important preserving the future of these vineyards is to them. Their passion for the AVA was evident and these are all winemakers who understand where the best wines can be made.

I’ve had a chance to talk to both Matt Cline of Three Wine Company, who helped found Cline Cellars, and Shauna Rosenblum of Rock Wall Wine Company, who learned everything she knows about winemaking from her father Kent Rosenblum who was known as the “King of Zin”.  Here’s more information about both of their vineyards and our conversation.

Joel Peterson and I chatted before he sold Ravenswood Vineyards. His new venture was started to “make wines for himself and return to his original vision”.  It is called Once and Future Wine Company.

Joel talked about tying the history of old vines in California and how Contra Costa provides a unique place to make these wines. Both Cline and Rosenblum talked about the urgency of preserving the land and the AVA’s environmental future.

We tried three wines, which I recommend highly:

It’s time to save California’s wine history. In recent years, the Agricultural Trust of Contra Costa County has been working with growers. With city leaders, the organization is considering creating, for certain vineyards, permanent agricultural conservation easements, which would prevent the land from being developed and reward owners with money and tax benefits. We need to keep buying these great wines and support the farmers …. because who needs another strip shopping center and a CVS on every corner?