I had the chance to hang out with Joel Peterson, winemaker for Ravenswood Winery, during his trip to Dallas in June.  Peterson’s background has always fascinated me.  Educated as a clinical laboratory scientist with a degree in microbiology, he worked in cancer immunology research while he dabbled in wine.  His passion led to an apprenticeship with Joseph Swan to learn about making Zinfandel and he founded Ravenswood in 1976.  His Zinfandel’s were quickly named the #1 and #2 wines in 1979 at a prestigious San Francisco wine tasting.  He continued to work in the medical field until 1992 when the winery made a profit and Robert Parker raved about his wines.

Peterson was in town for the Texas pre-release of his upper-end wines, which surprisingly were not all Zinfandel wines.  We tried eight wines – all were very different stylistically – but you could tell he was passionate about each and every one of them. 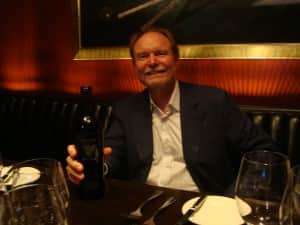 He started with an overview of mixed black wines and the point that it is rare to actually have a Zinfandel that is 100 percent Zinfandel because of the amount of mixed black grapes – a term used to refer to a blend of grapes native to Sonoma — Zinfandel, Petite Sirah, Carignane, and Alicante Bouchet.  The wines were all made exactly the same with the terrior showing differently in each wine.  Like Peterson, Ravenswood wines are big, bold and brash.  Here was our line-up:

Belloni Russian River Valley
I tasted boysenberry, sandalwood, tobacco and even some cardamom, which Peterson described as oriental baking spices.  This wine was 78 percent Zinfandel and Carignane, Petite Sirah, and Alicante Bouchet grapes.

This Zinfandel was definitely one of my favorites and I loved that the grapes came from a vineyard owned by women.  Silky is how I describe this with raspberry, cherry, pepper and spice.

The Big River Vineyard in Alexander Valley on the border of the Russian River was made from 100 percent Zinfandel grapes.  I tasted blackberry, spiced plum, oak, floral notes and a bit of fennel.  It was a fatter, juicer wine and possesses more of what traditional Zinfandel is known for.

This is one of the most historic vineyards and Sonoma’s first famous Zinfandel by William Hill was grown in this vineyard.   This blend contains more than 14 different varieties and is made in a Rhone style.  I tasted a nuttiness, vanilla, oregano, cherries and black raspberries.

Ravenswood has been working with the Teldeschi family and their famed Dry Creek Valley vineyards since the 1970’s. This was my favorite wine that was to die for with my salmon and the mushroom risotto passed around the table.  I tasted black raspberry, cherry, chocolate and smokiness in the finish.

This is what a great mixed black wine tastes like – a complex blend of Zinfandel, Petite Sirah, Carignane, and Alicante Bouchet.  Black cherries, plum, cedar, bay leaf, vanilla and cinnamon with a very long finish.  Put this one down for a while and see what happens.

This Bordeaux style wine is a blend of cabernet sauvignon and merlot.  Named because of the ample blackberry vines on the property, you taste red currant, plum, vanilla and tobacco.  Also a wine that needs some age or a decanter to fully bring out its nuances.