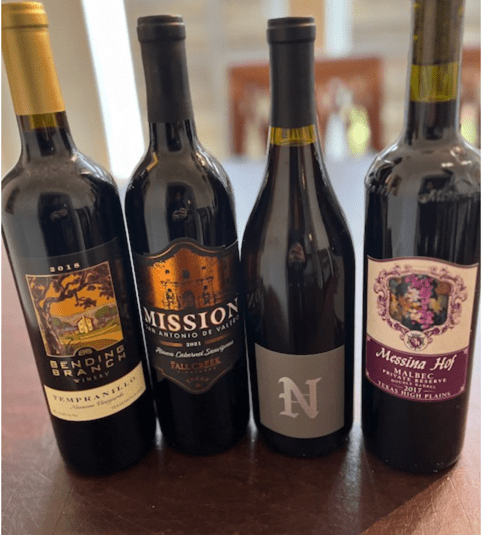 Currently, the Texas wine industry has 500 wineries, 340 growers and 5,140 acres devoted to grape-growing. Texas is ranked fifth in the U.S. for wine production (behind California, Washington, New York and Oregon) — and adds $13.1 billion to Texas’ economy that generates close to $20.35 billion in total economic activity according to the Wine America report.

Since I’ve been writing, Texas wines have come a long way. An increase in high-quality wines has resulted in wines that are skyrocketing in quality and are ageable.

I tried ten wines and here are my favorites:

Bending Branch Winery is a boutique winery near Comfort, Texas. It is known for intense wines and what its owner, Robert W. Young, MD, calls “Next World Wines,” a philosophy combining old-world winemaking with technology.

Ed and Susan Auler started out as cattle ranchers (while Ed was still a practicing lawyer) and took an exploratory trip to France in 1973 to research a French breed of cattle for potential cross breeding with their Angus herd in the Hill country. That trip sidelined into a French wine country trip that educated them about French wine, food, and culture and a passion for wine was born.

The question they had was if Texas could make world-class wines. The Auler’s believed in getting the best expertise in the business and consulted with U.C. Davis professors, California and French winemakers, and Pioneer Winemaker Andre Tchelistcheff.  That was the beginning of Fall Creek Vineyards.

By 1975, the Auler’s had cultivated a fourth-acre test plot on their Fall Creek Ranch to experiment with grape growing. By 1979, that “plot” was over seven acres and wine facilities were established in 1980 and grew to 400 acres.  I had the chance to tell the Fall Creek story a few years back here.

The mission of this wine is a commemoration to the heroes who died at the Alamo. Some of the grapes in the wine were harvested from land originally owned by William B. Travis. A portion of the sales of this wine will be given to the Texas General Land Office, which operates and maintains the Alamo.

After working in Napa and Sonoma, Austin, and Kate Pitzer, moved to Texas to make world-class wines and started Noblemen Wines. John Rivenburgh is the winemaker with an emphasis on producing Mourvèdre with a focus on varietals that originated in Southern Europe like Picpoul Blanc and Tannat that do well in Texas weather. The name of the winery pays tribute to the “Noblemen of Texas,” a group of German nobility that led to an emigration effort in 1840’s and founded Fredericksburg.

The wine was a blend of  92% Mourvedre and 8% Teroldego. It has notes of cherry, cranberry, leather, Earl Grey tea and baking spice.

Messina Hof Winery is a family-owned business based on the three cornerstones of family, tradition, and romance dedicated to producing premium Texas wines.

Paul Vincent and Merrill Bonarrigo founded Messina Hof in 1977 to combine Old World hospitality, New World ambition, and the potential of Texas grapes. Now helmed by Paul Mitchell and Karen Bonarrigo, Messina Hof has become the most award-winning winery in the state and one of the largest producers of 100% Texas wine.