Remi Cohen, the general manager of Cliff Lede, and I didn’t start our lunch with the intention of pairing delicate oysters at Montlake Cut with a rich Stags Leap Cabernet, but we found ourselves at the mercy of the strict rules of Texas’ Alcoholic Beverage Commission (TABC).  That called for ordering a Cliff Lede wine from Montlake Cut’s list vs drinking the wines that Remi had brought to pair with our seafood lunch.  The sole wine was the 2013 Cliff Lede Stags Leap Cabernet Sauvignon, the perfect match with our oysters and tuna poke, right?  And, surprisingly, while I’m not going to run out to pair oysters and cabernet, it went better than I ever would have imagined. 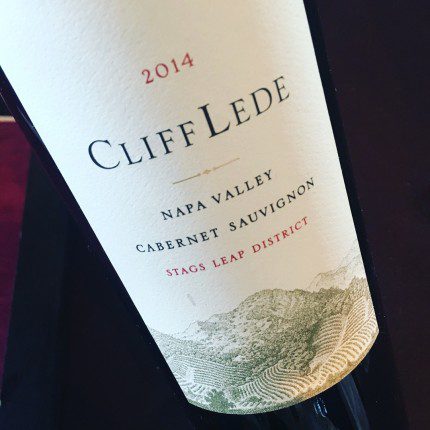 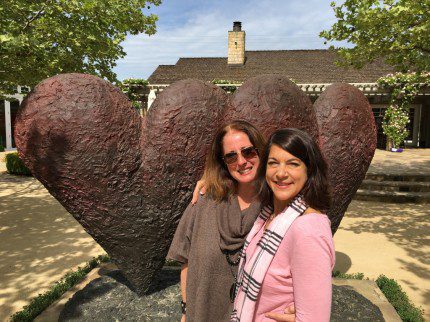 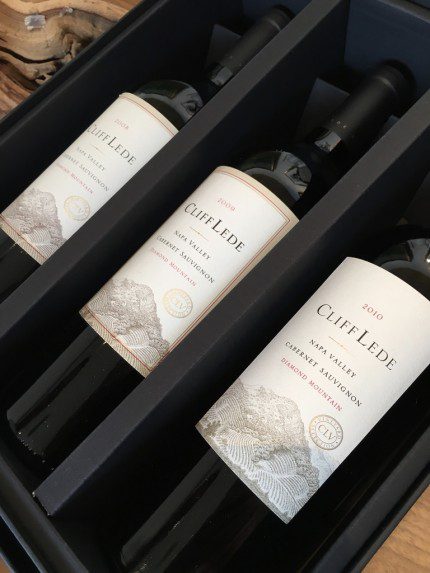 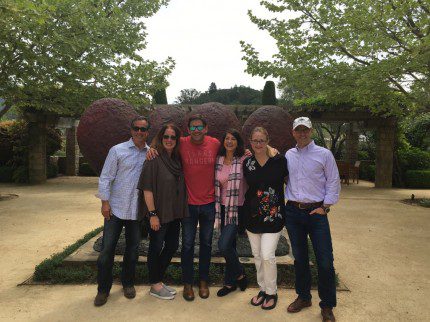 And one last shot from the Dallas friends visit

Remi told me about Cliff Lede’s story, much of which was new to me even though I visited the winery with a group of friends back in 2015.  This was a friend trip vs a blog trip, so my coverage was a little more relaxed.  Cliff, a Canadian born wine lover, purchased family-owned S. Anderson Vineyards in 2002 when he decided that it was time to leave the successful family construction business that he ran with his brother, and follow his passion for wine.  Cliff was a big Bordeaux enthusiast, but he didn’t speak French, so he settled upon relocating to Napa.  He acquired a sixty-acre estate in the Stags Leap District of Napa Valley.  He loved wine and rock and roll.  He had a brainstorm about naming vineyard blocks after his favorite classic rock songs that made sense to him.  And that’s how Moondance, Truckin,’ Dark Side of the Moon, Symphony for the Devil and Hotel California were born, which are now known as “Rock Blocks,’ all made from Bordeaux varietals.

He brought in some big name consultants like Michel Rolland and David Abreu, as vineyard manager, as he built his team.  He also kept his eye on a hillside vineyard, the Richard Chambers Vineyard, which later became the site of the Poetry Vineyard and Inn, an architectural landmark in the valley.  Each of the Poetry Inn’s five suites/rooms is named after a writer and overlook the vineyard.  The “Backstage” is a separate building which features rotating art exhibits – tastings in here are available only via a reservation.  This is where we tasted my last visit with Jerry Garcia’s artwork as our backdrop.

One notable thing about David Abreu’s style is that he brings in budwood and clonal selections from other well-known and cultivated vineyards.  Chris Tynan, who was formerly the assistant winemaker at Colgin came on in 2012 as the winemaker.

We then talked about the wines we were originally going to try, which I ended up bringing to my neighborhood girl’s wine club later that night.

First, was the only white that bears the Cliff Lede name – the 2016 Cliff Lede Sauvignon Blanc.  This is a blend of Sauvignon Blanc, Musqué clone and Sémillon.  Remi described it as modern meets Old World.  Concrete eggs meet non-filtered.   It has a gorgeous minerality and was full of tropical fruit, Meyer lemon, crème brulee and honeysuckle.  I love this wine. 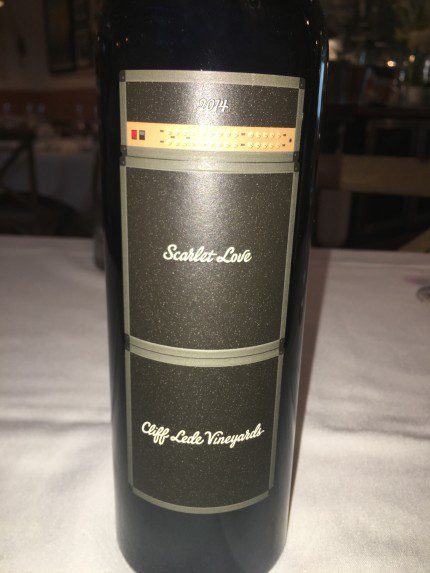 We then spent some time talking about the 2014 Scarlet Love, which was a mashup of two estate vineyard blocks named after Cliff’s favorite rock songs – the Grateful Dead’s “Scarlet Begonias” in the Twin Peaks vineyard and from Cream’s “Sunshine of Your Love” in the Poetry vineyard.  It is a blend of Cabernet Sauvignon Blanc and Petit Verdot.  I tasted black cherry, blackberry, dark chocolate, cassis and candied fig.

We then talked about the FEL wines, named after Cliff’s mom, Florence Elsie Lede, who was a garage winemaker.  She inspired his love for wine and food.  FEL Wines produces Pinot Noir, Chardonnay and Pinot Gris from the Anderson Valley and the Sonoma Coast.  Cliff enlisted Winemaker Ryan Hodgins, to help find the Savoy vineyard.  That’s where the production began with five pinot noirs, two chardonnays and one pinot gris using Anderson Valley grapes.

2016 FEL Pinot Gris – this is a burst of tropical fruit, citrus and minerality.  It’s refreshing and a perfect patio wine.  It would have been the perfect wine for the oysters, but was not meant to be that day.

2014 FEL Savoy Vineyard Pinot Noir – this is how a pinot noir should express itself.  Notes of black currant, black cherry, earthiness and herbs.  It’s elegant and I had to make the wine club girls share this wine or it would have disappeared instantly.

We then shifted to Remi’s personal story of how she got to Cliff Lede.  In 2010, she was working as a vineyard consultant and Cliff became one of her clients.  He was in the mode of working with some great consultants, but wanted to lay the foundation for having his own people.  In 2011, a very challenging vintage, she led her first team from farming to harvest.  This success saw her grow in several different roles from the Director of Winemaking and Vineyards to today’s General Manager and Vice President Role.

Remi loves this family and is dedicated to evangelizing these wines.  She was in Dallas for the first ‘House of Cab Dallas’ tasting where Stags Leap District vintners and owners came together to debut cabernets and current releases from 13 different SLD vintners.  Unfortunately, she landed back home and the wildfires began in Northern California on Sunday night.  My story with Remi is not about the fire and the devastation, but I can tell you that our back and forth, fast and furious correspondence over the next few days on the state of the winery, Cliff Lede employees, her residence and her boyfriend’s residence, this is a woman that cares about this winery and this city.  Thankfully all employees were safe – although sadly one did lose their home, all but three percent of the harvest was in barrel (meaning these wines are fine – go buy them when you can) and the winery as well as the Poetry Inn were unscathed due to the very hard work of firefighters.  Remi knows how lucky they were and is dedicated to help Napa and her winery brethren in efforts to rebuild.