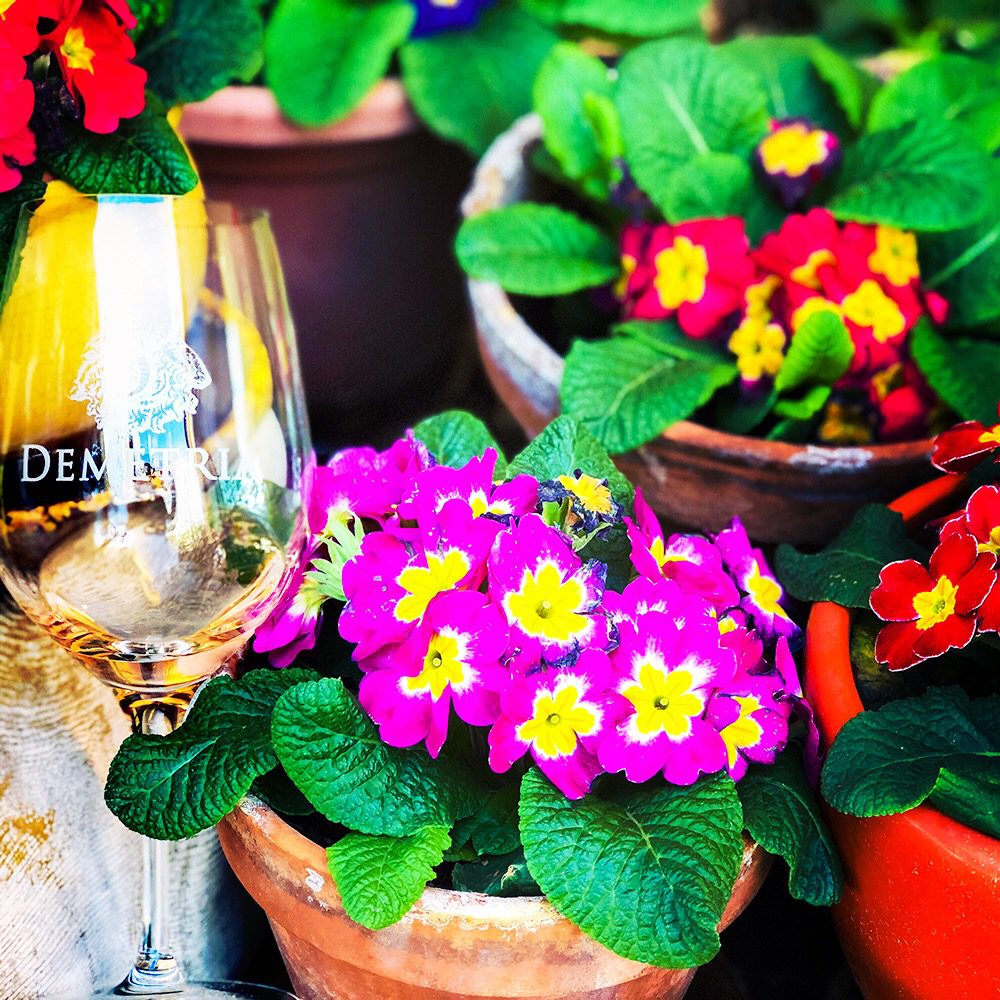 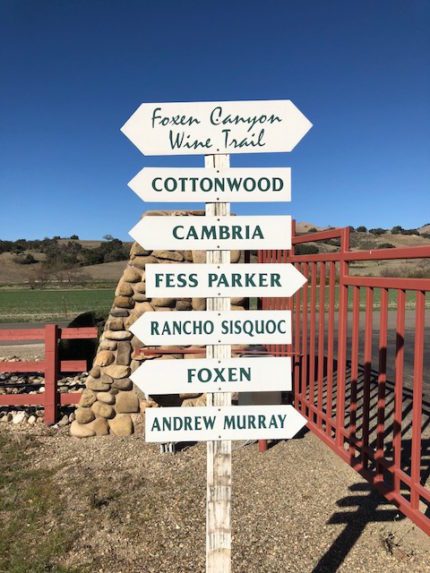 Four years ago, I attended the Wine Bloggers Conference in Santa Barbara and had two main take-aways – the people and wines were fantastic.  I knew then that I needed to come back and discover more.  Looking back at my blog then I wrote two things that resonate:

·      “The people here were great.  Wes Hagen, the winemaker (at that time) for Clos Pepe said it best, “Wine is liquid humanism.  We need to inspire the imagination of the people that drink wines.”  I have never met a more down to earth group of people that have gathered together in their sense of place – it’s collegial, it’s fun and most importantly, it’s real.  You can see it as the winemakers help each other go through the AVA application process to the banter about terroir, climate and grapes.  These are people that you want to party with later.” 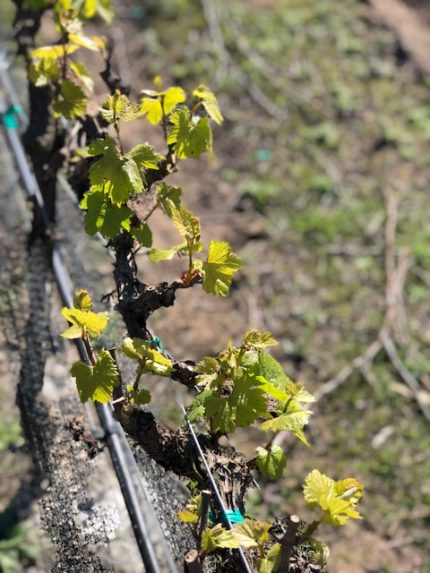 In February, I had a chance to go back with a few girlfriends.  I had already done the “Sideways” pilgrimage with a few other bloggers prior to the last conference and I was trying to balance the relaxed nature of a girl’s trip with my quest to be in journalist mode.

I wish planning the trip had been a little easier.  I reached out to the industry association wine folks and was surprised to not get a response back.  So, I went to a friend and PR guru of Santa Barbara wine, Shawn Burgert, and asked him for his recommendations. He completely delivered.  But to plan a trip first you must understand the region. 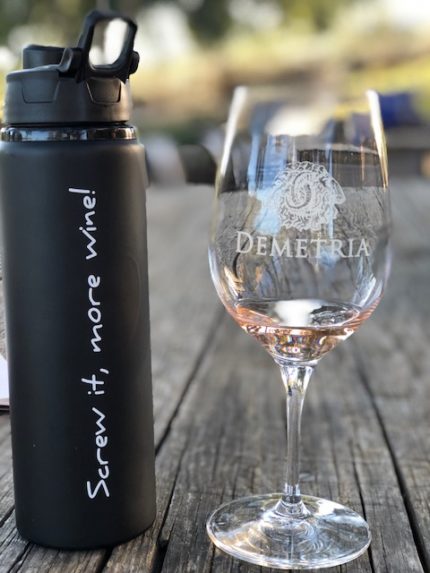 Much to the chagrin of many of the winemakers in the region, the area is often referred to as the Central Coast.  This is a disservice to the region.  It incredibly diverse and is comprised of 250 miles of coastline and ten very diverse counties – from San Francisco to Santa Barbara.  It’s California’s largest AVA with four million total acres in which more than 100,000 are under vine and with more than 360 wineries.  And the sense of place is very different – there’s no standard climate, temperature or soil.  Two river valleys – the Santa Maria River and the Santa Ynez River Valley are the two binders.

The region has a storied and long history beginning in 1782 when Junipero Serra planted the first vines.  Four years later, the Santa Barbara Mission was established.  Sadly, this came to a screeching halt in 1920 with Prohibition and the wineries didn’t begin producing again until 1962.

I’m going to talk about some of my favorites with a very brief history of each place since this was a vacation we were somewhere between consumers and the trade during these visits. 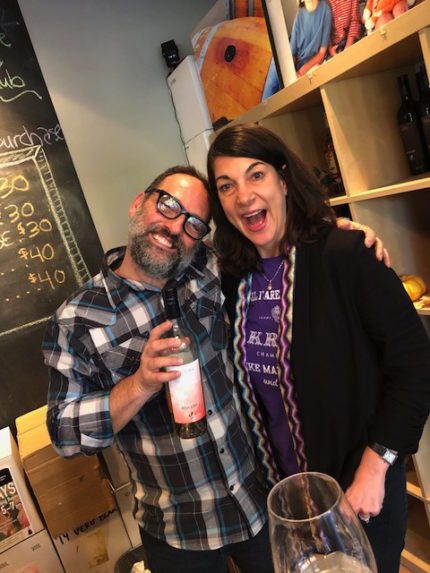 The One and Only Larry Schaffer and me

You will not find a more authentic person than Winemaker Larry Schaffer …. like it or not.  I had the chance to meet Larry during the Wine Bloggers Conference and we connected.  He was the first call that I made and knew that my irreverent group of friends had to meet this larger than life character that happened to make amazing wine. 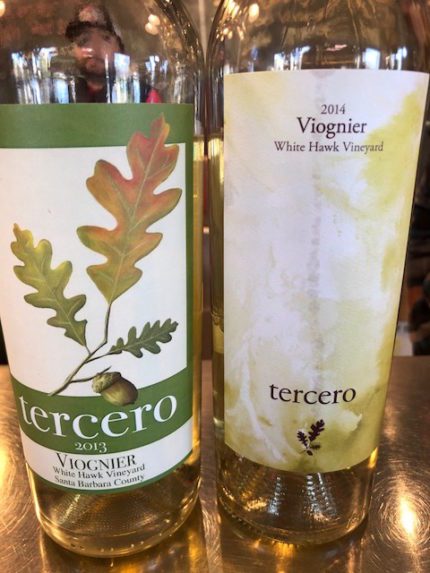 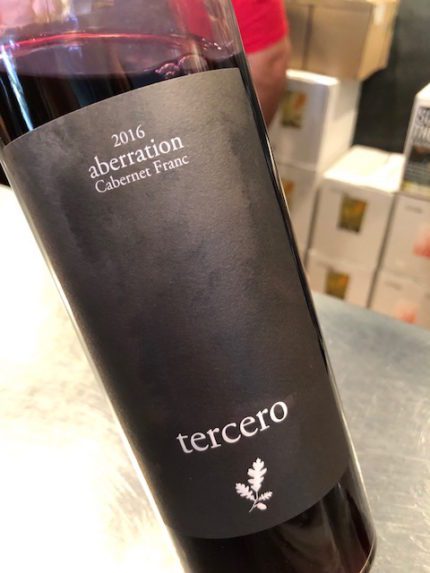 After a career of doing many things including being an Enologist for Fess Parker Winery, Larry decided that he wanted to start buying grapes and making his own wine.   We stopped to see Larry in his tasting room in Los Olivos which surprisingly is lacking a single tasting note.  Larry thinks consumers should make their own decisions and based on the number of cases our group took home of his red and white Rhone varietals, that is a smart and solid choice.  He is also a master of baked goods and if you are lucky enough to be there when bread or cookies are in the tasting room, consider yourself lucky. 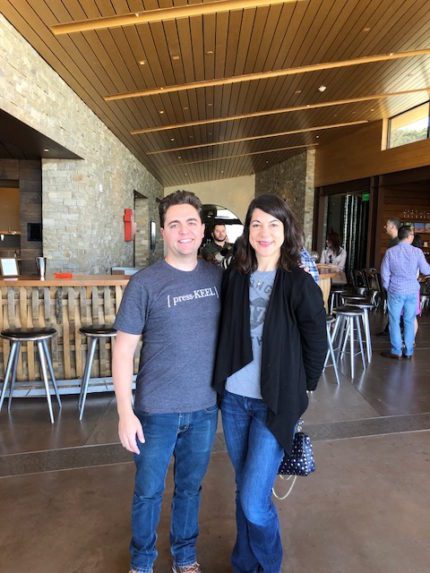 Cameron Porter, our awesome host, and me

The winery is awe inspiring. We sat on the gorgeous patio with the expansive views of the coast and vineyards and enjoyed amazing Chardonnay, Sauvignon Blanc and Pinot Noirs with Cameron Porter, Advanced Sommelier and Estates Manager, as our guide.  It started our first full day of Santa Maria Valley wine country perfectly. 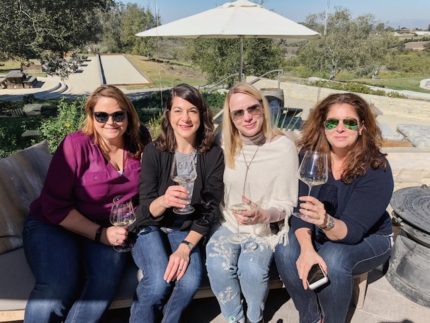 Presqu’ile, which was once an old gladiola farm, was started in 2007 when the Murphy family acquired 200-acres in Santa Maria Valley, the second oldest AVA in California.  Originally from Mississippi, the family wanted to recreate Southern hospitality at their winery.  They were avid collectors of wine and wanted to embark on their own project after investing in a winery project. 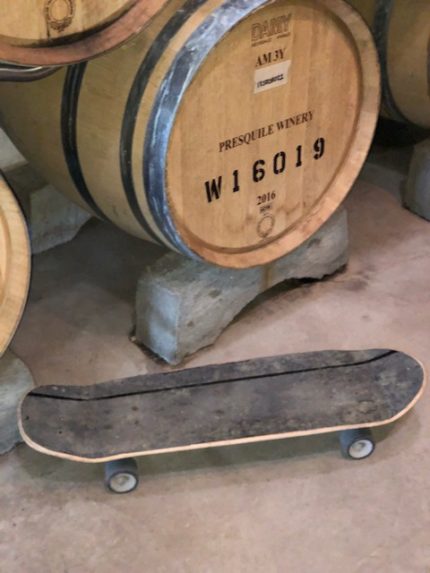 When You Need To Quickly Get Around the Caves…

For two years, the Murphys, and their Vineyard Manager Jim Stollberg and Winemaker Dieter Cronje, designed the vineyards and planted accordingly with their vision of small lot wines in mind. The vineyard has 73 total acres of vines and the vineyard is Sustainability in Practice (SIP) certified. The winery combines architecture and hospitality. 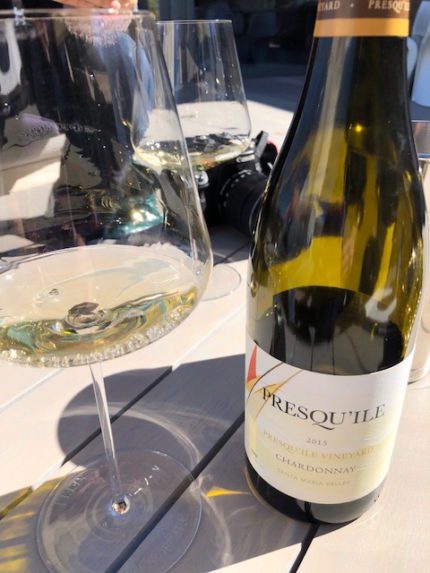 While approximately 85% of the wine made at Presqu’ile are entirely estate grown, Presqu’ile also partners with Rim Rock, Steiner Creek and Bien Nacido Vineyard. 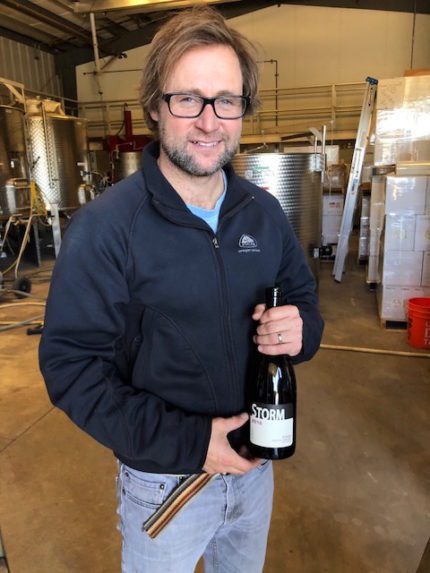 As we went down the hill from the Presqu’ile property, there sat a non-descript barn.  In that barn sat the site of some of the most impressive wines we found during our trip.  That is Storm Wines with Ernst Storm, a quiet South African with a passion for making organic Rose, Pinot Noir, Sauvignon Blanc and Syrah. 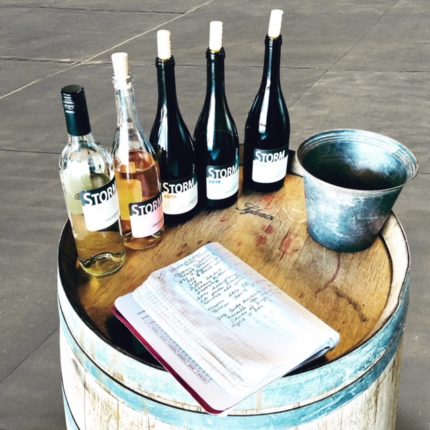 As he said, “I love nature and believe the less that you do to impact the environment, the better. It is all about respect.” 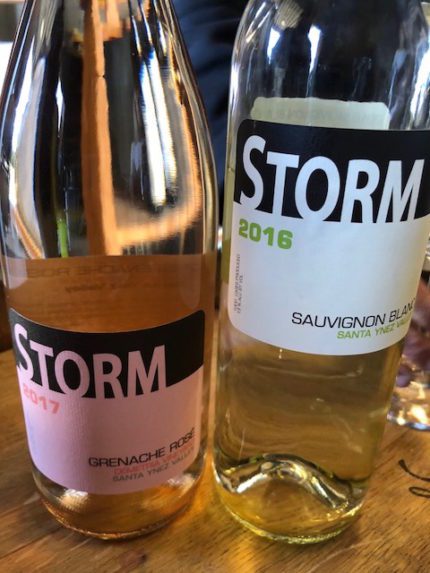 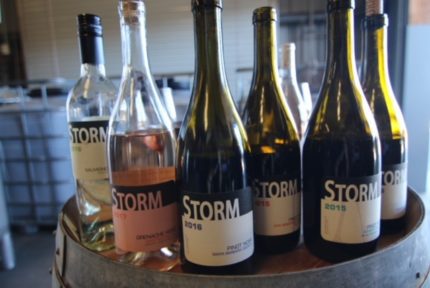 Ernst grew up in South Africa and went to school at the Elsenburg Agricultural School in Stellenbosch and worked as a winemaker in South Africa.  He came to California to learn how to work in a warmer client and eventually saw similarities with the soils and microclimates between the Western Cape and Santa Barbara County.  He worked at Firestone Winery (during the days of the Bachelor filming, and no he was never on camera) and started Storm with 6 barrels in 2006.  In 2008, Ernst became involved in the winemaking at Curtis Winery.  At the end of 2013, he left Curtis to focus on Storm. 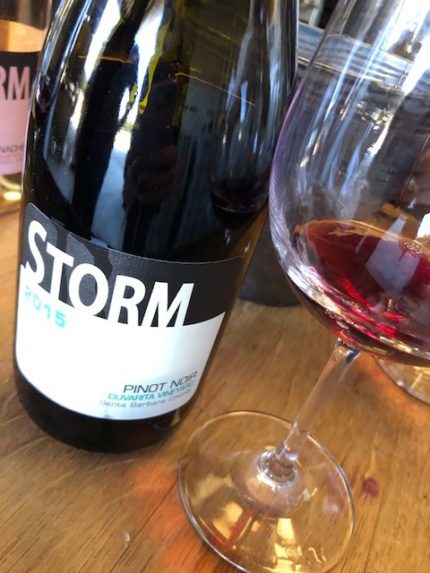 Ernst’s brother, Hannes, launched Storm Wines-South Africa in 2012. His focus is Pinot Noir and Chardonnay from the Hemel-en-Aarde Valley. 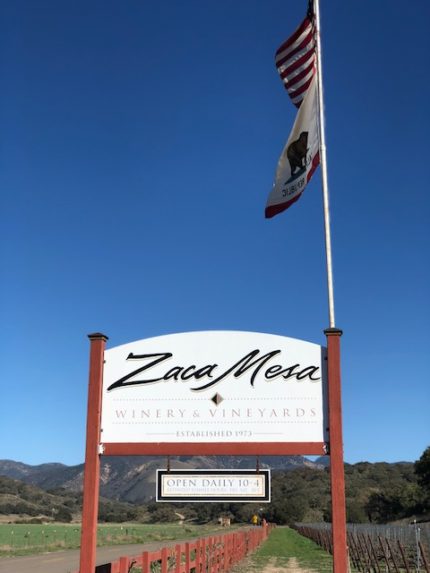 Zaca Mesa is considered one of the founding wineries of Santa Barbara County – in fact the third and they are known for the great winemakers who have trained there and started their own wineries.  From Ken Brown, who was Zaca Mesa’s first winemaker, who started Byron in Santa Maria Valley to Adam Tolmach, Jim Clendenen and Bob Lindquist who worked at Zaca Mesa before starting Ojai, Au Bon Climat and Qupé, the list is impressive. In fact, they started Zaca University, an official training center because of it. 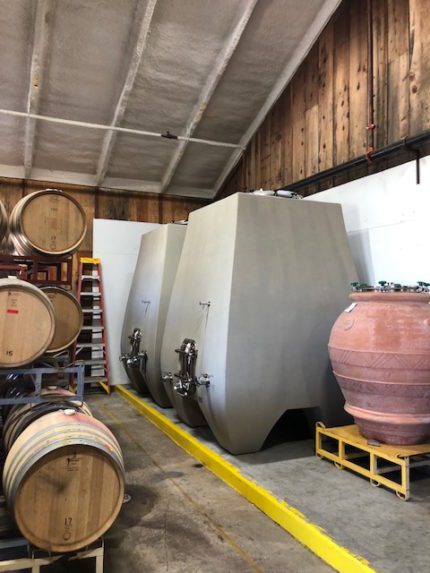 An example of the different ways of experimentation at Zaca Mesa

Purchased in 1972 by John Cushman and five friends, the first vines were planted a year later in 1973.  They were known to be experimental, planting several varietals to see what would work.  In 1978, Syrah was planted, namely the Black Bear Block, which has become own of the most well-known and oldest Syrah blocks of the Central Coast. 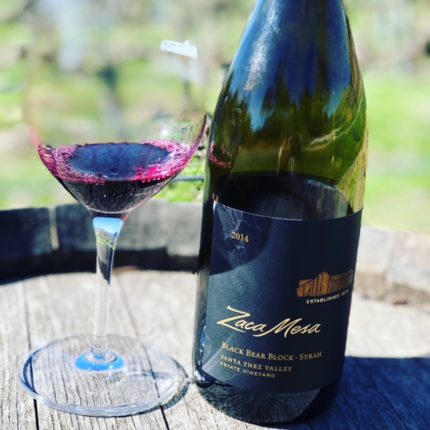 Today the winery focuses on Syrah, Viognier, and other Rhône varieties.  In 2016, Eric Mohseni was promoted to Director of Vineyard and Winery Operations and Kristin Bryden was promoted to Winemaker.  John Cushman, along with his brother Lou, became 100% owners of Zaca Mesa in 1988. 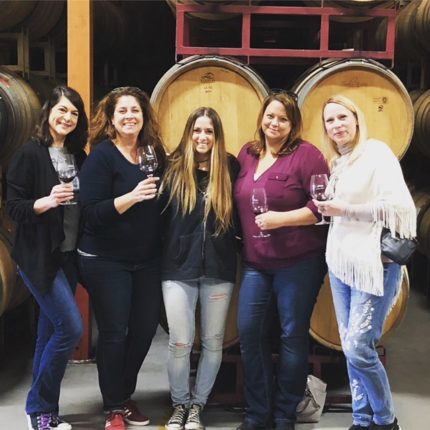 We had a great tour of the winery and enjoyed a great line up of wines. 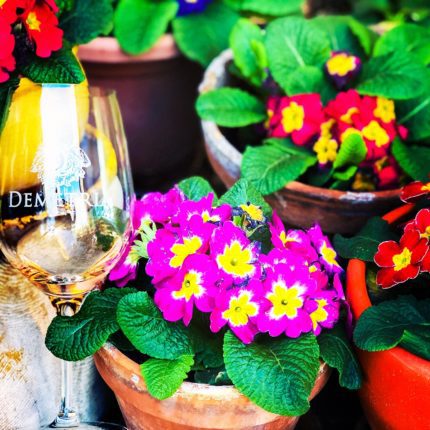 Demetria Estates was born when John Zahoudanis went searching for vineyard property in 2005.  He had grown up as a farmer of olives, citrus, and grapes and used to make family wine in Greece.  John and his wife Sandra purchased the estate in Los Olivos and named it after their daughter Demetria, and the Greek goddess of harvest Demeter. 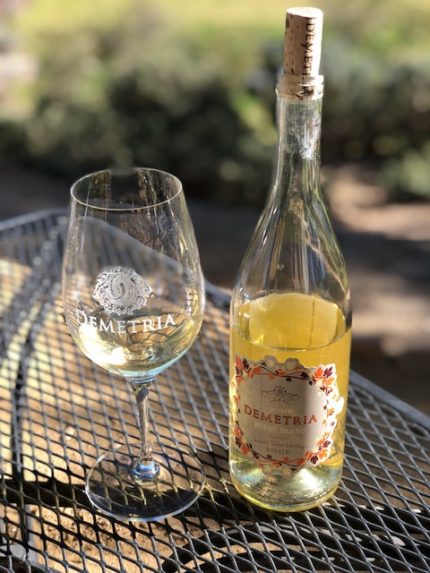 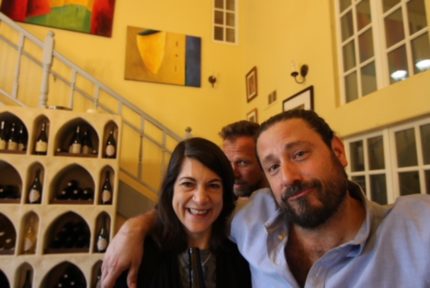 After spending about an hour on the patio tasting through some delicious estate Rhone wines that are bio-dynamically farmed, we realized the party was in the tasting room.  That is when we had the chance to talk to Alexis Zahoudanis, John’s son, who has lived and worked on the estate full-time since 2009.  He works with Harry Waye, the winemaker, on forty-six acres of Rhone varietals.  Demetria also makes Burgundy-style wines, sourcing organic Pinot Noir, Chardonnay, Pinot Blanc, and Pinot Gris grapes. 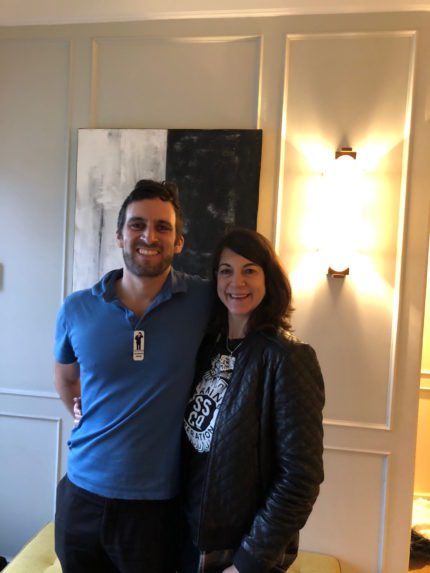 I must give a shout out to Sean Michael from Destination Drivers.  Destination Drivers will transport you in your rental car for a fraction of the price. They pick up and drop you off at your hotel and make it so easy along with way.  Sean took great care of us – he picked up food, made recommendations for wineries and was delightful even when I did rap Paul Revere by the Beastie Boys (sorry, Sean).

2 thoughts on “My Return to Santa Barbara: Part One of Our Wine Country Trip with Tercero, Presqu’ile, Storm, Zaca Mesa and Demetria”