For the past 15 years, I’ve been a part of a girl’s wine tasting club.  Over time, what used to be a monthly gathering has evolved to about four times a year.  In that 15 years, there have been many changes — marriages, divorces, kids (I remember having to fake drinking champagne at one of the gatherings because I had not told people that I was pregnant yet), new jobs, moves and deaths.  We’re a little older, a lot wiser and our tastes have certainly improved.  What hasn’t changed is our December tasting.  It’s almost always champagne, not sparkling wine (there was one interesting outlier this year that was a sparkling red).  The champagnes have to be over $25.  Bonus points if we’ve never had them before or they are small grower champagnes.  And, it’s always guaranteed to be a long morning after drinking so many champagnes during a busy holiday season.

Champagne is a sparkling wine that comes from the region Champagne using specific grapes – primarily Pinot Noir, Pinot Meunier and Chardonnay — grown according to appellation rules.  It is a misnomer that any sparkling wine is often referred to as a champagne as true champagne must follow specific grape pressing methods and  be produced according to Méthode Champenoise techniques where the wine goes through a primary and then a secondary fermentation in bottle. 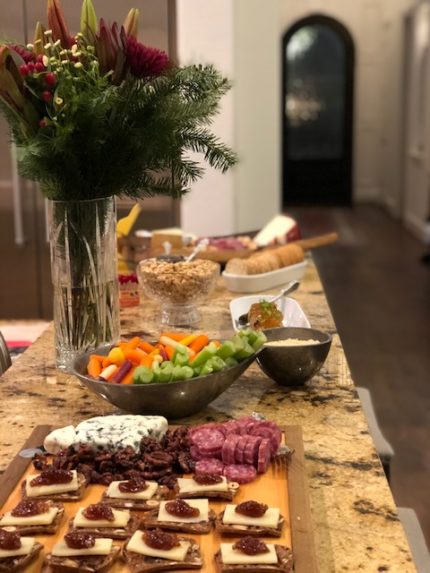 We gathered at my house for the 15th year with 13 people crammed around the table.  My husband, who is the chef in our family, spent a few days coming up with the menu.  And then friends gathered, wines were consumed and stories exchanged.  While we had some serious wines, this wasn’t a night for tasting notes or bottle discussions.  It was about fun, friendship and tradition over great champagnes.  After all, aren’t those the times that are the most wonderful part of this season?

2 thoughts on “It’s the Holiday Season: Bring On the Champagne”