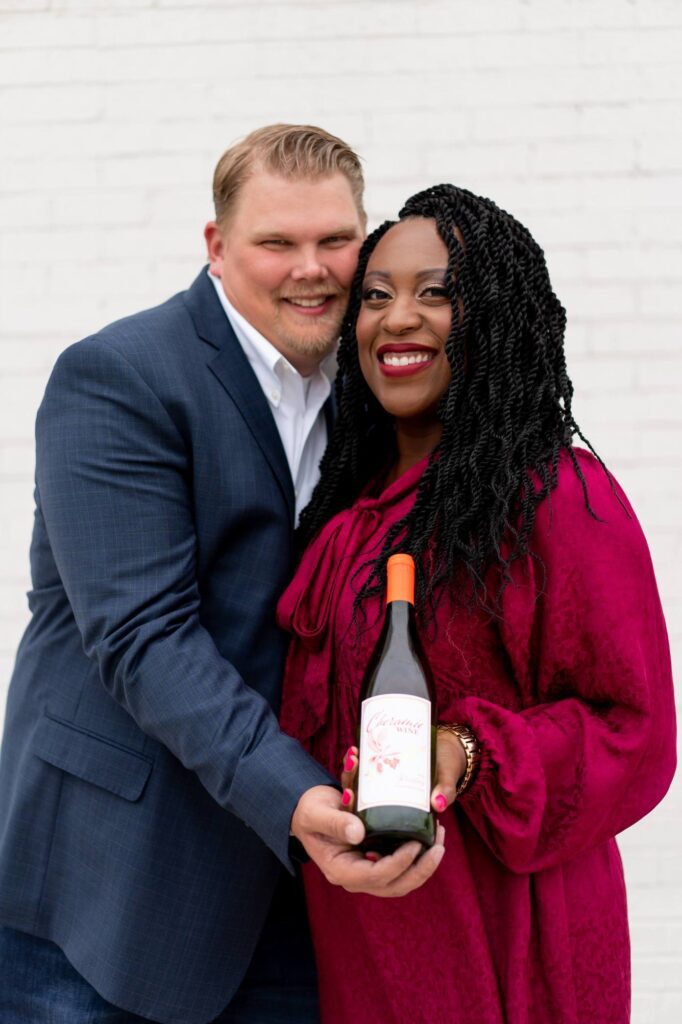 Meeting Cheramie Law and Todd Aho of Cheramie Wines, a Salt and Pepper Wine company, is an experience that stays with you. These are two individuals that exude authenticity, passion, kindness and appear to be the perfect yin and yang combination in a marriage. While they were destined to be in the wine business, it was an unconventional path.

Cheramie’s journey in wine began after her tour of duty with the Marine Corps.  Since she was an older college student, she’d  hang out at a wine bars and started to learn a lot about wine.  Many of her friends would take trips to Fredericksburg, but she was unable to afford them.

Todd came back from Iraq in 2009 and was with the only unit that didn’t lose a soldier. The Army is known for preparing soldiers for war, but preparing soldiers for coming back is not their strong suit. Luckily, Todd found a non-profit organization that focused on providing the resources needed to re-enter civilian life successfully.

Fredericksburg was geographically comfortable for him. It’s between Fort Hood and Del Rio, two notable Texas Army bases. He knew he could take his military assets and learn to redirect them into something else.  The non-profit told him to focus on a passion new to him that he would have to learn and that passion became wine. He told me that wine became a process that “brought him back from the war.”

Cheramie finally made it to Fredericksburg and the Texas Hill Country on one of her first dates with Todd in 2013 and wine became their mutual passion. As Cheramie entered Todd’s world, she found there were some key differences between their families.  She grew up with a single mom and resources were not easy. Todd grew up in a huge Finnish family that was known for big gatherings, but they weren’t boisterous and there was very little “small talk,” which is considered unnecessary. And Todd’s family is Lutheran, where drinking is not acceptable.  It was an adjustment for both of them.

They received a challenge about Texas wines from an industry insider and that sparked a vow to help elevate Texas wines. They set off on a quest to meet with winemakers, growers, and industry leaders all in an effort to learn about Texas wine and seek out the “Texas truth.” They told me, “when you love, you do.”

In 2017, they started Salt and Pepper Wine, LLC to help put Texas on the map and educate consumers about Texas wine and through social media and in-person tastings. Cheramie is black, and Todd’s white. The name is a play on their adventure to bring Texas wine to the globe.  The name, most importantly is about togetherness and inclusivity, where everyone – no matter their race, ethnicity, gender, sexual orientation, wine knowledge, economic status, are welcome and celebrated.

This led to a wine brokerage business focused on Texas wines and in 2019, they started Cheramie Wine specializing in making wines grown and made in Texas. Cheramie Wine is the culmination of years spent learning and loving the Texas Wine Industry.

I first met Cheramie at TEXSOM in 2019, and unbeknownst to me, they made a financial sacrifice to pay for one ticket to the grand tasting, so Todd did not attend. Her ability to light up the room with her presence has always stayed with me.  And it was a proud moment when she was asked two years later to help judge the top TEXSOM wines. But not surprising — she and Todd are the type of people that would be successful in whatever they do.

The first wine we tried was the award-winning (TEXSOM Silver) 2019 Cheramie Riesling designed to showcase a thought-provoking Texas wine. Cheramie said, “We want to create curiosity that Texas can produce a great Riesling. It’s off-dry with notes of tropical fruit, apple, citrus peel and jasmine.

Our second wine was the 2019 Cheramie White Blend, which also won a silver at TEXSOM, and the blend is 63 percent Roussanne, 19 percent Marsanne and 18 percent Viognier. It has lots of stone fruit, citrus, jasmine, tropical and a touch of honey, but has a nice minerality to keep you sipping.

Our final wine was the 2020 Cheramie Montepulciano Rosé, which had structure and nice aromatics. Cheramie described it as a “sexy, expressive wine.” It was a surprising orange hue and I tasted mandarin, strawberries, cherry and herbs. Lots of structure and surprises.

Cheramie Wines focuses on Rhone or Mediterranean blends and Todd described them as “Old World with a Texas twist. They plan to concentrate on 4-5 core wines and also enjoy the art of making 2-3 more experimental wines that express the uniqueness of Texas. “Todd and I love the blends. I liken it to watching a painter, utilize paints,” she said. They work with a select group of Texas-based growers and winemakers and are laser-focused on the quality of their small-lot wines.

Paving the Way for Others

We spoke of diversity, of interracial marriage, events like George Floyd that caused our country to wake up as well as heightened awareness of how few black winemakers are in the business.

There is a very small representation of black people in the wine industry and Cheramie knows they can and will be leaders in the wine world and help pave the way for anyone who hasn’t seen themselves in wine. Despite the fact that black consumers make up about 11 percent of wine drinkers in the country (as reported by the Wine Market Council Consumer Segmentation), the Association of African American Vintners reports that only 50 out of the 10,000 U.S. wineries are black-owned. However, the industry has seen big changes in recent years, due to people to pushing the industry to evolve.

While judging the TEXSOM best wines this year, she saw the organization making some big changes. Cheramie said, “This year, things completely changed. I saw diversity, all wine journeys and backgrounds – and all races. It gave me hope that this is all the wine industry should and can be.

She told me that neither of them comes from money and an ultimate goal is to succeed not only with the brand, but supporting other minorities in the business and being part of the change.

The couple has big dreams to go along with their grace, grit and guts. And their dream of leaving a legacy looms big. “If you are born into the Toyota family, you have an understanding of what it means. We want the same understanding in our family and we want to continue to affect change with our legacy,” Cheramie said.

The couple knows they need to do some more fundraising to reach their goals. Today they are in brand-building phase and are focused on giving their customers a great experience. A longer-term goal is a tasting room to further share the Cheramie Wines experience.

I would definitely put these guys on a watch list of making a significant contribution to the future of Texas wines.