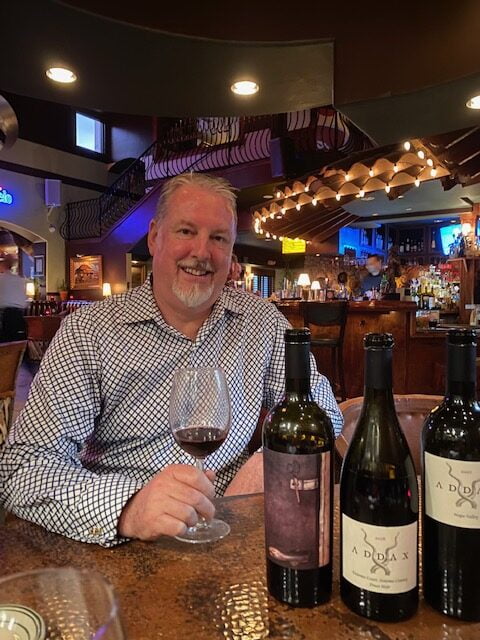 Elyse Vineyards – it’s a 33-year-old winery based on trust – a handshake, trust in employees and continuing long-term relationships with four generations of Napa growers to make the best wine possible at all price points.

Even though the winery was acquired in 2018, the new owners still focus on pure expression of fruit with a sense of place.

In 1983, Nancy and Ray Coursen arrived in California from Cape Cod, Massachusetts, to make wine. They worked harvest at Mt. Eden Winery in Saratoga, moved to Napa Valley and became innkeepers at a bed and breakfast. Ray then worked for Tonella Vineyard Management and then Whitehall Lane Winery, where he worked his way from cellar worker to head winemaker.

They started Elyse Winery with 286 cases of Zinfandel in 1987 after producing at custom crush facilities and purchased a small winery a decade later on Hoffman Lane, the site of their current winery and tasting room.  I had the chance to visit in 2013 and was impressed at the quality and value of the wines.

After thirty years, Ray and Nancy decided that it was time to retire. A conversation over dinner with Josh Peeples, and his partner, Cheryl Foil, led to them selling the winery to the couple three years ago. A shared passion for honoring what Ray and Nancy started and a commitment to continuing to evolve the winery made the Coursens’ know they were keeping the winery in good hands. The sale included the winery, the inventory, a cottage and one acre of vineyard off Hoffman Lane near Yountville.

Josh originally sold a start-up focusing on order management software for the beverage industry, moved to wine country where he’s been making wine since 2002 and currently works on winemaking and production. He brought his other labels — Standard Deviation, Institution, and Napa Cider Co. to the Elyse family of wines. Cheryl has a background in computer programming and venture capital and oversees online marketing and finances.

I had the chance to meet with Lee Abraham, National Sales Manager, and Willi Sherer, Master Sommelier for Elyse Winery. What a fun lunch and tasting, where it was clear that this is a team that has a great time with the sole focus of making Elyse wines better.

Josh made a few instrumental changes in the winery. First, he brought in well-known Winemaker Russell Bevins, who is credited with having the current record of making the most 100-point wines in the world and made the world’s only 100-point wine in 2011. He also added to a strong team – bringing in well-known industry veterans like Lee and Will, resurrecting some of the great wines of the label, expanded the brand portfolio and breaking ground on a new winery referred to as the Institution (love people who laugh at the industry’s craziness). But what didn’t change is the trust in employees, making wines at all price points and styles and sourcing from 52 vineyards.

I was curious to try some of the new vintages and the Institution label, which I hadn’t tried before. After all, this is a winery that shares some prime real estate with Scarecrow Winery and while I always liked Elyse and Addax Wines, I was excited to see Russell’s influence.

The Addax portfolio of boutique wines features an Oakville Cabernet Sauvignon, Petaluma Gap Pinot Noir, and a Sonoma Coast Chardonnay. An addax is an African antelope, and you can see the horns shown on the bottle in the logo. Lee and Willie also joked about the phonic meeting of the name. At least I think they were …

If you look on the Institution label, you’ll see the scissors that serve as the lock on the winery. It took Josh about four months to realize that no one had asked him for the “keys” to the winery since he took over. He found there was a system of the team letting themselves with scissors hanging on a hatch lock that had been in place for years and no keys were necessary. That’s the trust among the team and the focus of folks with their hearts set on making great wines. He not only embraced this, but that became the label.

So, what’s next for the winery? Lee and Willie talked about today’s 8,500 case production and the fact that that the winery is licensed for 25,000 total. With Russell and Josh at the helm and small boutique wines being produced, it won’t be a decision based on mass production, but it gives them room to maintain tradition while taking the three brands and giving them space for innovation.