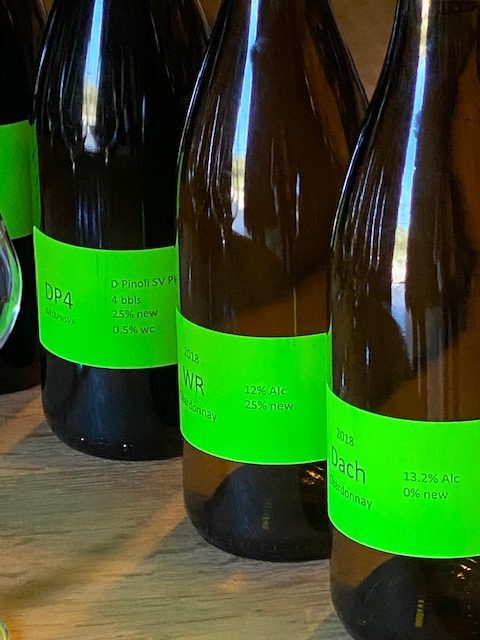 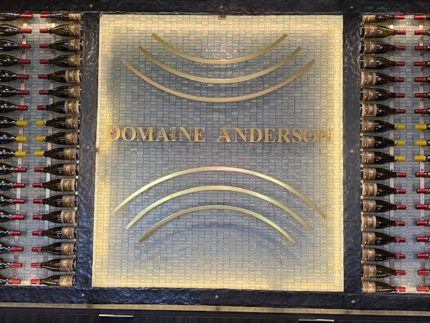 We began our wine country exploration in Anderson Valley in Mendocino with a tour of Domaine Anderson Winery with Winemaker Darrin Low. 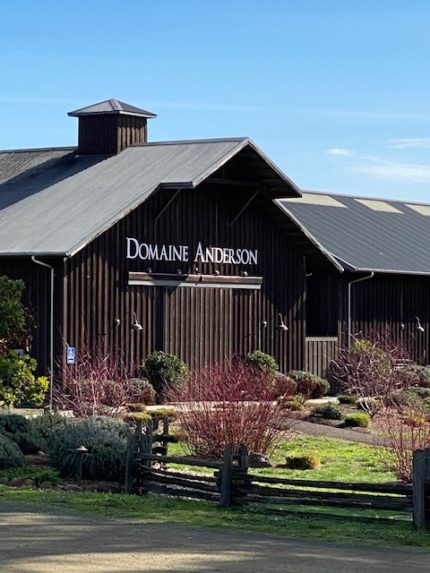 In 1981, Jean-Claude Rouzaud of the Louis Roederer family took one look at the remote area and saw its potential in cultivating an American Grand Cru.  Prior to Roederer, Owner Jim Ball started growing clones on the property in 2007.  Unfortunately he overextended himself in 2008 and by 2011, he was financially under water.  Ball’s clonal blueprint fit right into Rouzaud’s vision and Domaine Anderson Winery was created.  Today, Jean-Claude’s son, Frederic, is in charge for the family. 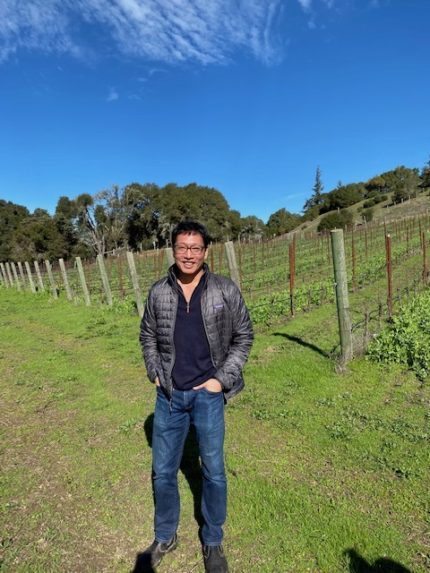 Darrin in the Vineyard

The 50-acre vineyard is farmed organically and biodynamically and Darrin talked about the  “harmonious ecosystem”.  Led by Assistant Vineyard Manager Andrew Beebe, the program includes everything from the ground water repurposed for irrigation in the reservoir, to the compost used, to the plants used to attract animals and insects to keep the pests away, to an organic vegetable garden, and a honeybee colony.  And, the Domaine Anderson wines currently in barrel will be labeled organic beginning in 2018. 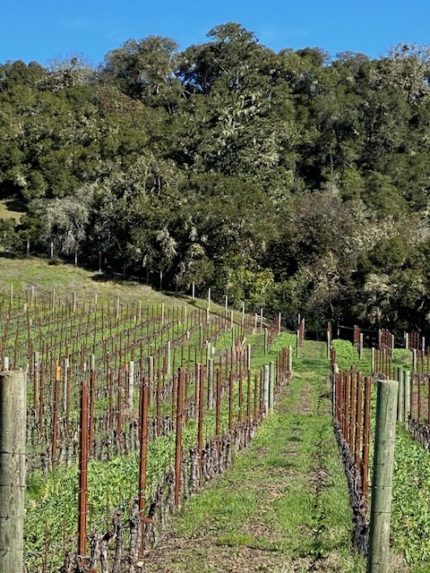 The vineyards named Boonville, Deep End, Walraven and Dach include warmer and cooler regions and diverse terroir .  Each vineyard is managed using sustainable practices and Dach Vineyard has recently been certified organic and biodynamic.

Darrin told us about his background and how his love for wine began at an early age.  He grew up in Healdsburg and worked in his parent’s wine shop.  He majored in Enology and Viticulture at UC Santa Cruz and studied abroad at l‘Institut d’OEnologie in Bordeaux, France.  After graduation, he followed his passion for Pinot Noir to Oregon’s Willamette Valley, before returning home to make wine at J, Grgich Hills and Flowers. 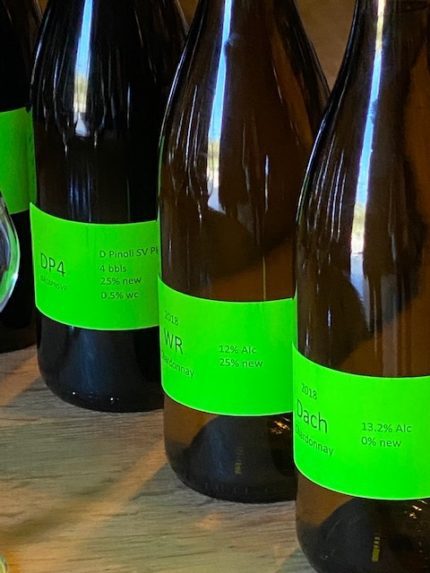 Note: these are temporary labels for the blends 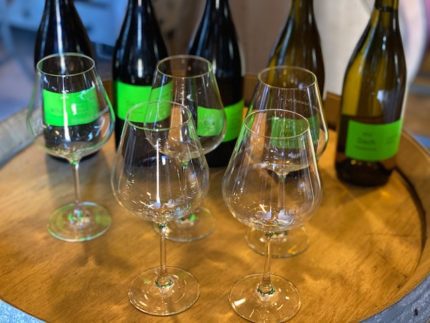 We hiked to the highest point of the Dach Vineyard and saw the diversity of the terroir.  After the tour, we headed back to the winery, which was created by architect Howard Backen.  We then tasted several blends of pinot noir and chardonnay that had yet to be barreled.  I loved the diversity of these small production pinot noirs from the different vineyards of Domaine Anderson.  Some of these were drinking easily today which was shocking without any barrel age or bottle time. 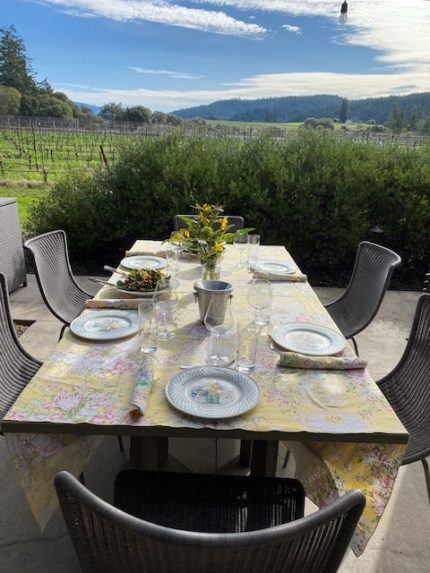 The view from Domaine Anderson Winery 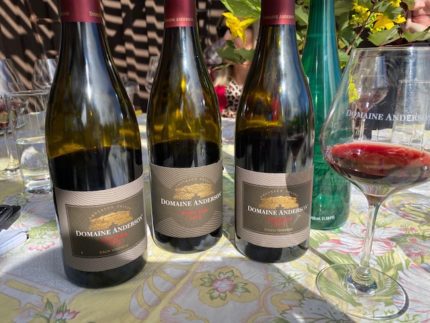 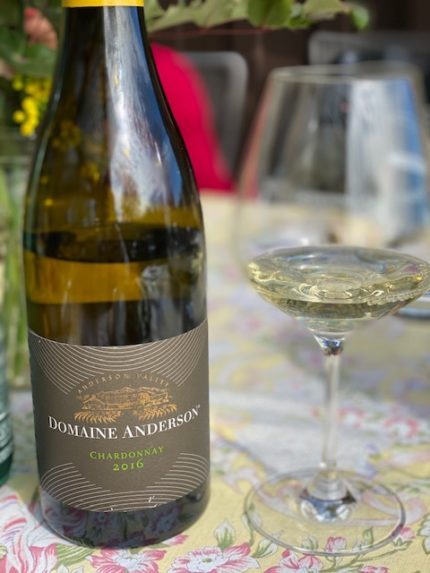 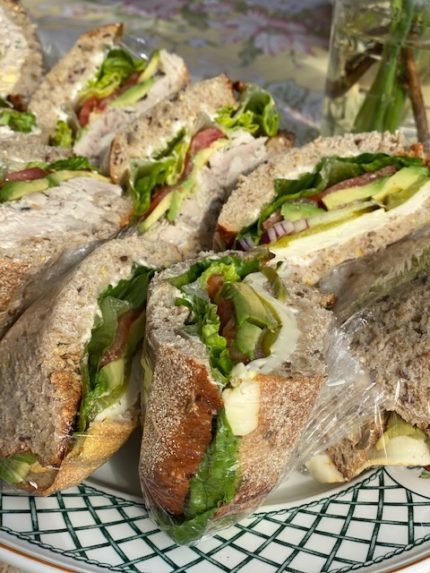 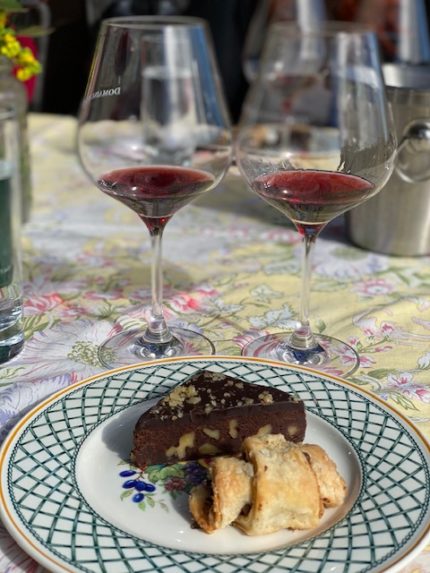 We continued with more hospitality from Domaine Anderson Winery with a wonderful lunch on the patio featuring more several Chardonnays and Pinot Noirs which showcased the fantastic wines that the estate has to offer.