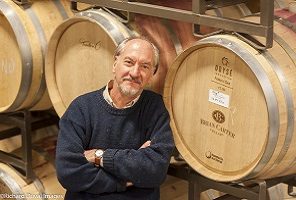 The love affair with wine started early –  Brian Carter was 14-years-old and he asked his mom if he could make wine out of blackberries.  It started out as science focused, and over 40 years later evolved into an art making him one of the first to focus exclusively on blended wines.

It wasn’t always smooth sailing.  He recalls one batch was filled too high causing the pulp to plug up the fermenting block and explode all over the ceiling.  He laughed as he recalls the purple spot on the ceiling for years and said, “I’ve been making messes even since.”

Carter grew up in Corvallis, Ore., where his father was a professor at Oregon State University, and he recalls Cold Duck being the family’s special occasion wine.  While his interest in wine piqued when his dad took a sabbatical and he tasted “real” wine at a campsite in Italy, he originally did not set out to be a winemaker.  He earned a degree in microbiology from Oregon State University, but it took a Wine Aficionados’ Class and meeting with pioneering winemakers like David Lett, Founder and Winemaker of Eyrie Vineyards, to set his course.

He followed his passion and attended UC Davis.  That same year, he worked crush at Mount Eden, one of the original California boutique wineries, and then full time at Chateau Montelena of the “Judgment of Paris” fame.

Brian was considering taking a job in Oregon when a visit to Washington convinced him of an untapped and dynamic region and opportunity.  “There was a long list of grapes, diverse terroir and I was intrigued,” he said.  “When I announced I was leaving Chateau Montelena in the late 1980s, people were incredulous.  Especially when they found out there were only 16 wineries in the state. “

He took a job making wine at Paul Thomas Winery. Ten years later, Carter became the founding winemaker for Apex Cellars and Washington Hills in the Yakima Valley.  He then became a consulting winemaker for emerging wineries including McCrea Cellars, Hedges Family Cellars, Soos Creek and Silver Lake.  In 1997, Brian created a small production of “Solesce,” his first branded wine, at the Apex winery where he was winemaker and co-owner.  It was a hit and in 2006, he decided it was time for Brian Carter Cellars.  This is when the winery became the first to focus on blended wines, including Oriana, Tuttorosso, Byzance, and Le Coursier (formerly L’Etalon).

Brian talked about his philosophy of blending and why he did something that was so unique at the time. “There were great blends in Europe and I wanted to bring them to Washington state.  It was my goal to be the first winery to be exclusively a blending winery,” he said.  “I have the scientific background, but I soon discovered the wines were better and they became a combination of science and art.”

Carter is celebrating his 40th year of making Washington wines and was reflective of his time.  “It’s such an honor to have landed here.  There are so many great people on my journey that contributed to my success story,” he said.  “Brian Carter Wines and Washington wine evolved together.”  And the Washington region has exploded. The Washington State Wine Commission reports there are 900 wineries, more than 350 grape growers and 50,000 acres of vineyards – approximately the size of Napa Valley.

The winery has grown as well with two tasting rooms – one in Woodinville and one in Vancouver, Washington.  Brian is also on a committee to bring LIVE LIVE Certified sustainability and vineyard certification to Washington State.  “It’s important and I’m dedicated to it,” Brian said.  “We are heading in that direction by farming sustainably and integrating our pest management.”

Brian works with growers from 10 different vineyards with different terroirs and characteristics across Washington State in the Red Mountain AVA, Yakima Valley AVA , Columbia Valley AVA, Rattlesnake Hills AVA and Snipes Mountain AVA as well as wineries near Prosser and the Wahluke Slope.  Traditionally, the winery produces 5,000 to 7,000 cases per year, but cut back to 4,000 cases in 2020.

Brian and I tasted the following wines together:

This Rhone blend that means “golden lady” in Latin and is the only white wine made by the winery. Brian described it was a “non-traditional” Rhone Blend and he’s been told by some of his wine club members it is the only white they drink.  It’s a blend of 51% Viognier, 36% Rousanne and 13% Riesling.

I tasted stone fruit, brioche, pears, melon, citrus and a touch of honey.  It made me crave crab cakes.

Translated from Italian into “all red”, this super Tuscan-style blend is 68 percent Sangiovese, 17 percent Cabernet Sauvignon and 15 percent Syrah.  I tasted blackberries, chocolate, lavender, raspberry cherry and truffles.  It was balanced and complex.  This was the first wine that I can remember in a while that my husband asked the question of how we could get more.

This Bordeaux blend focusing on the Right Bank is more than 50 percent Merlot with the rest of the remaining balance of Cabernet Sauvignon, Cabernet Franc, Malbec and Petit Verdot.  This wine, which translated from French into “The Steed,” had notes of cassis, violets, eucalyptus, spice, mocha, rich berry and chocolate. It was complex, balance and elegant.

This is a blend of 53 percent Grenache, 24 percent Syrah, 12 percent Mourvèdre, 7 percent Counoise and 4 percent Cinsault. Brian described it as “decadent and luxurious.  The jewel is in the ripeness of the Grenache grape.”

This wine is part of the Dedication Series of wines for people who have been important in Brian’s life and in his Washington winemaking experience.  The fourth wine is a Portuguese variety Douro River-style blend from Washington that is a tribute to success for 40 years for the Washington wine industry and for Brian.  Stephen Black, the winery’s label designer, submitted the label as a joke, but the selection committee loved it.

This rich Brandy fortified port-style dessert wine, which translates into opulent in Portuguese, exists because Brian brought the varietals in and planted them.  When I asked Brian why he went to such a great extent, he talked about the importance of authenticity.  “I didn’t want to do a non-authentic port.”  I tasted berries, dates, citrus and almonds.

It’s clear that Brian’s love for science and his love for blending has turned the world of wine into his palate.  Like with the port, if there’s a color that doesn’t exist and he believes it will translate well into Washington terroir, he considers the canvas to be blank.  And the artistry begins.