A Return to the Willamette Valley: A Pre-Trip Exploration

Mary Cressler, Ember and Vine; Amy Corron Power, Another Wine Blog, Marcy Gordon, Come for the Wine Podcast and me

Returning to the Willamette Valley, Oregon’s leading wine region, was a homecoming of sorts.
My first trip was in 2010, the year I launched my blog, and I met friends that trip that continue to be some of my closest today.  We’ve all come a long way since then and I’m proud to say – look for the new Ember and Vine Cookbook coming to a bookstore soon and definitely check out the award winning Come For The Wine podcast.

I was here to explore the Willamette Valley, home to two-thirds of the state’s wineries and vineyards and home to more than 500 wineries, for a Wine Writers Education Tour (WWET) organized by Sommelier and Wine Teacher Fred Swan.  While the Willamette is recognized as one of the premier Pinot Noir producing areas in the world, it is a varied appellation that has seven recognized AVA regions — Chehalem Mountains, Dundee Hills, Eola-Amity Hills, McMinnville, Ribbon Ridge, Van Duzer Corridor and Yamhill-Carlton and spans 60 miles at its widest point.  Having had experience with Fred’s conferences, I knew to expect the unexpected and that we would be drinking a variety of wines. 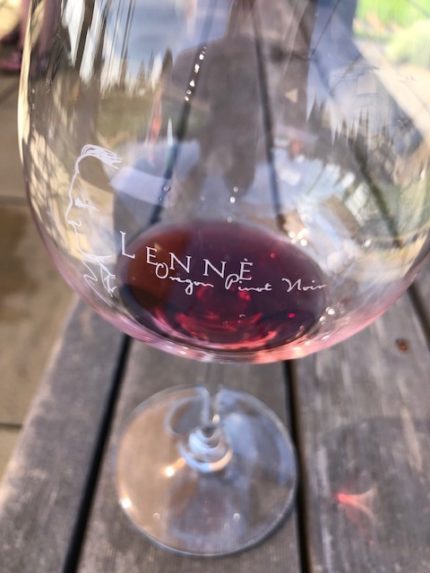 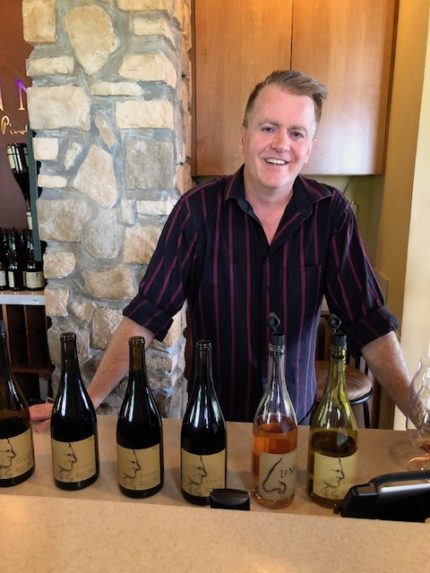 But first, our friend and PR firm owner, Carl Giavanti arranged a pre-tour of several vineyards for a small group of us.  Our first stop was at Lenné Estate in the Yamhill-Carlton AVA where we were hosted by Hospitality Manager Eric Bruce. 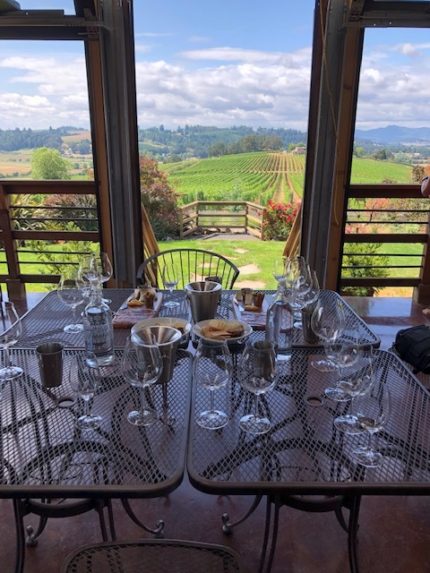 The property was acquired in 2001 by Steve and Karen Lutz and they planted vineyards on what Steve described as “the poorest soil imaginable,” due to the depleted ancient sedimentary and it took six years to produce the first vines.  The 15-acre vineyard is located on a steep hillside that makes equipment hard to navigate.

Lenné was first named after a chicken farm west of London, England, in the village of Wolkingham where Steve’s father-in-law “Lenny” raised Steve’s wife’s family, including his wife Karen who eventually made her way to Oregon.  Lenny died in 1999, but he gave Steve and Karen the down payment and the winery is named in his honor.

Lenné’s winemaking style is described as minimalist and is comprised of two labels.  Steve started as a winemaker in Napa and started to search for the perfect Pinot site.  He found it in Oregon and it was literally love at first “site.”  Eric joked that Karen describes him as a “third rate handyman who loves to drive a tractor.” 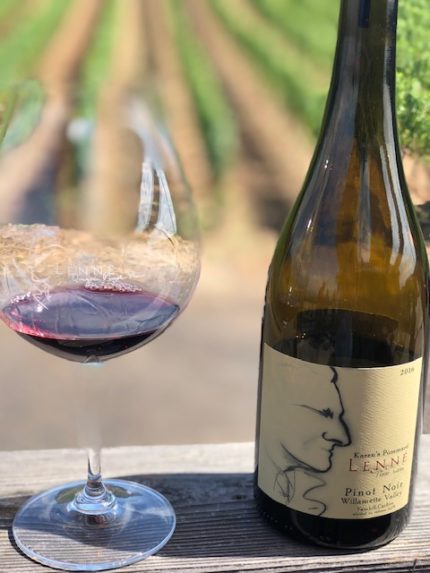 The winery produces two labels that are made of estate fruit.  The first Pinot Noir is named LeNez (The Nose) and is made from the entire vineyard and clones planted there.  The other Pinot Noir is called Lenné Estate and is the best of the barrel selections.

We tried a variety of Pinot Noir wines as well as the Chardonnay and Rosé.  As I tasted through the Lenné wines, it was clear that location and tough terroir have made these wines special. 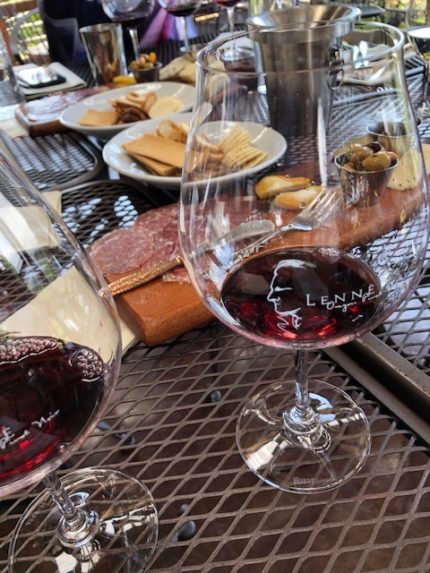 Steve also hosts eight blind tastings a year where he puts his wines up against some of the greats around the world.  There is a belief that an educated consumer is a better wine buyer.  And who wouldn’t support a winery owner who has the confidence in his own wines to pursue that path? 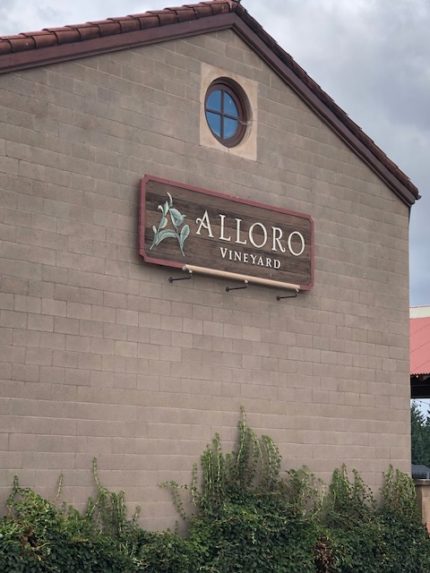 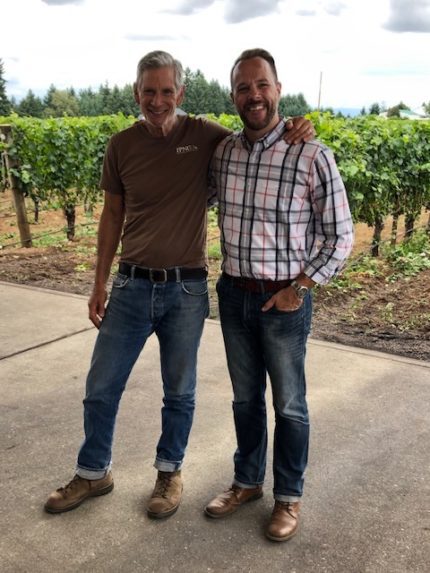 Our next stop was at Alloro Vineyard, a place labeled “for the Table”, from the land that featured wines from a living farm in the Chehalem Mountains AVA.  We met David Nemarnik, founder/winegrower and Eric Ploof, hospitality manager.

This 110-acre property was purchased in 1991 and takes inspiration from Italy.  You’ll find a lovely Tuscan farmhouse, culinary gardens, olive trees, cattle, sheep, lamps, goats, ponds and a pasture, as well as heirloom sheep that graze the vineyard cover crops.  “Alloro” is Italian for laurel leaves translating back to David’s Italian/Croatian heritage as well as the Laurel Ridge site itself.  When the winery hosts a whole farm dinner, you literally will find everything from the farm used with the exception of salt, pepper and a few spices. 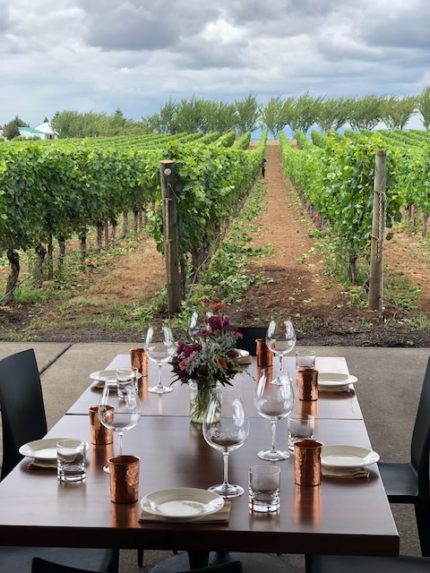 The winery had its first harvest in 2002 and makes wines from 33 acres of estate vineyards.  They use dry-farming and gravity flow techniques and focus on a single clone for each barrel. 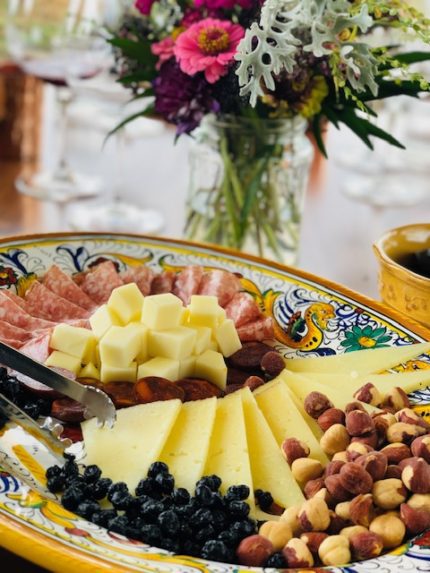 David talked about the importance of the marriage of food and wine and how those combine to delight people.  “The core value of improving and innovating is to delight the customer and have that attention to detail.”  It’s a point of view I’ve heard from many of my technology clients, but never from a winery — I loved it. 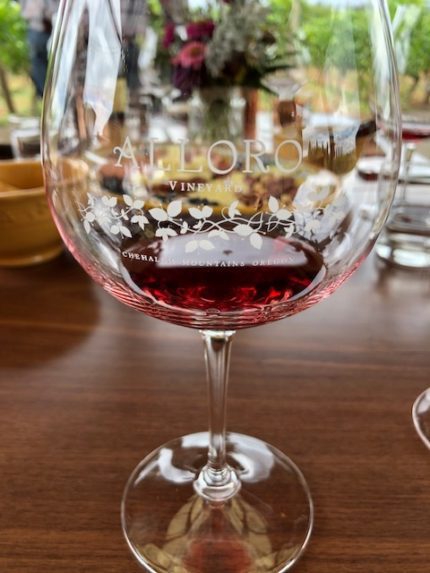 He also talked about his Italian family point of view where hospitality is making sure that whoever in your home has something to eat and drink put in front of them within five minutes.

Tom Fitzpatrick was named the winemaker in 2010  after working in France, Napa and New Zealand.   Alloro makes wine from 33 acres and produces three estate Pinot Noirs, Chardonnay, Riesling, Rose of Pinot Noir, and Vino Nettare—a dessert wine made from Muscat and Riesling. Each wine had a distinct sense of time, place and took you somewhere based on its journey. 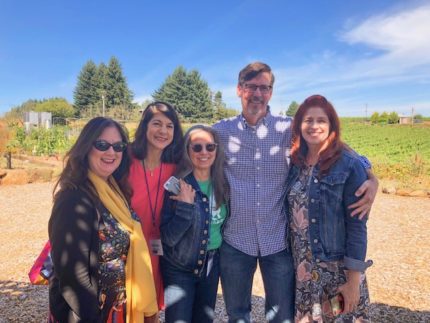 We met Winemaker Tom Fitzpatrick at a Riesling focused event at Brooks Winery a few days later and he talked about giving these wines the “possibility and personality to shine.”

The second biggest takeaway from me, other than hospitality, was the discussion of Oregon’s culture. David talked about when he began planting his vines he was at a place in time that not many people really knew what to do and that that created a collaborative industry that is impossible to recreate anywhere else in the country.

The third stop of the day was Bells Up Winery, described as micro-boutique and “un-domaine”. What is un-domaine you may ask?  It’s about keeping things simple in winemaking, being humble, having a tasting room in a converted pole barn. 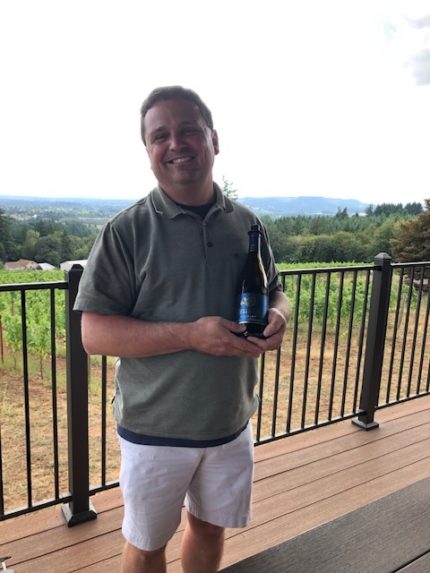 Winemaker and Owner Dave Specter and his wife, Sara, began making wine in their basement in 2006 as a passion project for their fifth anniversary in Cincinnati.  Dave realized he would much rather be a winemaker than a corporate attorney.  At that same time, Sara’s mentor was diagnosed with Stage 4 pancreatic cancer.  That diagnosis gave them both the realization that now was the time to pursue their dreams and there was no guarantee in life. 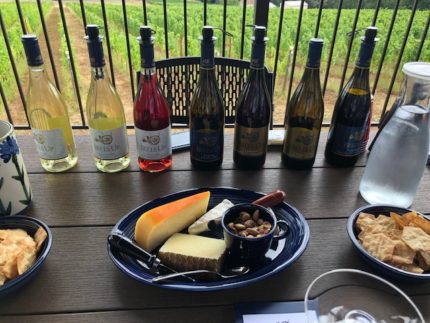 He decided to take a chance and worked as an unpaid cellar rat for Joe Henke of Henke Winery in Cincinnati who took him on as his winemaking apprentice and taught him the business of being a professional winemaker.  During this time, Dave enrolled in an online enology course at Washington State University and earned his certification.  In 2011, he won two different amateur wine competitions with two different wines.

He and Sara had visited Oregon before and knew they wanted to return.  In 2008, they toured the state with the last stop in Newberg, which happened to be 400 feet up the mountain from the property they acquired.  That sealed the deal.  They sold their house in Cincinnati to fund their next adventure.

After relocating to Oregon, he completed a harvest internship in the Fall of 2012 at Alexana in Dundee, Oregon under Bryan Weil and studied viticulture at Chemeketa Community College.

The property was a former Christmas tree farm that had seen better days.  Dave describes it as “this place was just the place that came up at the right time and was the perfect situation.” 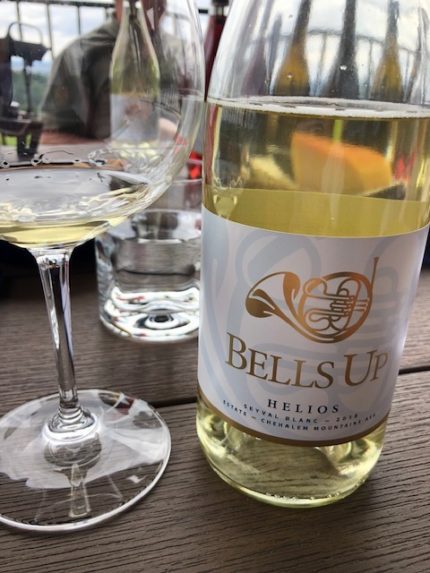 The couple needed a name for the winery, and it was time to go back to their musical roots.  Dave played the French horn for 20 years it was important in his life.  The property is also located on Bell Road.  “Bells Up” is a notation by the composer in the score of a piece of music. At a dramatic moment, it directs the French Horns to lift the bells of their instruments to project their sound with more intensity.  Because now was the couple’s moment to shine, it’s a perfect name. The first wines were released in 2015 and the winery currently makes 500 cases today with a master plan to never make more than 1,000. 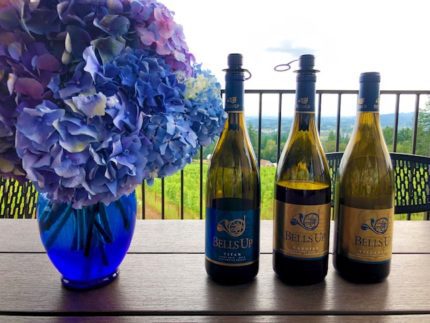 All of the wines are also named after pieces of music that feature the French horn.  For example, George Gershwin’s “Rhapsody in Blue” is the name for the Pinot Blanc because it’s jazzy and energetic.

We tried several varietals that were all sourced from sustainable micro-growers and hand-crafted including Seyval Blanc, Pinot Blanc, Rosé, Syrah and several Pinot Noirs.  Talking with Dave and while tasting these wines, you see the joy he has found in his second career and it’s fun to see a winemaker dedicated to an “un-domaine” approach.

Our final stop was a rocks vineyard tour and sunset tasting with Tom and Deb Mortimer at Le Cadeau Vineyard.  Le Cadeau is planted on almost all rock.  To further emphasize that point, the winery’s tagline is “Rock grown Pinot Noir.” 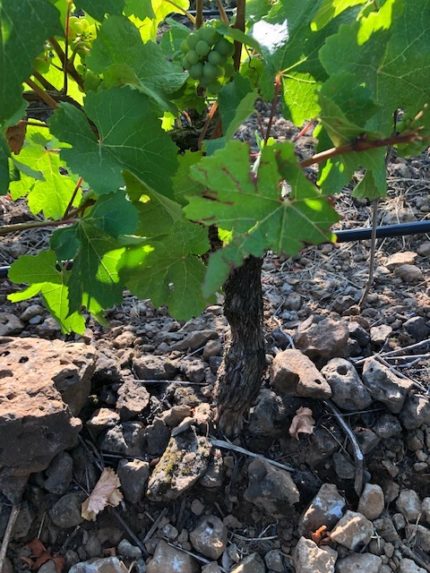 Founders Deb and Tom Mortimer began looking for Willamette Valley property in 1996.  A year later they found an uncultivated parcel on the south slope of Parrett Mountain, just a few miles east of Newberg, Oregon, in the Chehalem Mountains AVA near the southern tip of Parrett Mountain.

Tom tells a great story. After he had decided to purchase the property, he walked down and stood at the barbed wire fence that borders one side of the property and remarked to her, “this is going to make a great vineyard.” Deb responded,” how would you know and how are you going to do this?” 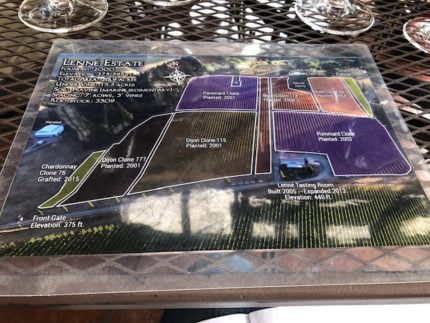 In 1997, he hired a Cat driver and cleared ten acres.  “I had never seen so much rock in my life,” he said.  Eleven more were cleared in 1998.  The first six acres of Pinot Noir were planted in 1999.  There are more than 15 clones represented including Pommard, Wadenswil, Dijon 667 and 777, Mariafeld (a Swiss Pinot noir clone), Dijon clones 113, 114 and 115, Calera non-cert #1, Mt. Eden non-cert, Swan 97, Calerna non-cert #2, Vosne Romanee, Calera 90 and 96, Dijon 943, Hanzell 108, Mt. Eden 37 and Grand Cru PN 125 and more were planted increasing the vineyard to 16-acres.  I mention the detailed clones because this is a vineyard of experimentation and a study of variables are part of daily vineyard management.  Tom has a passion for the history of clones and how they work in different soils, rootstocks and aspects. 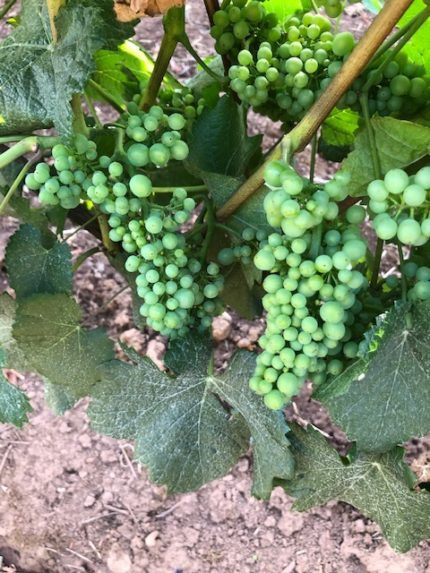 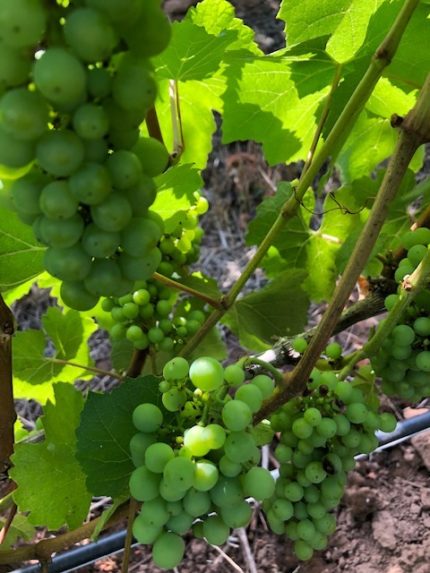 Aspect is also important. “Aspect translates into climate,” he said as he toured us around different sections of the vineyards.  You could see the variation in the soils and microclimates.

The winery also has two different winemakers – Jim Sanders and Steve Ryan.  Tom’s perspective on that is, “These winemakers showcase the attributes of the vineyard differently.  They are like musicians and may have the same lyrics, but they put their own voice to the song.” 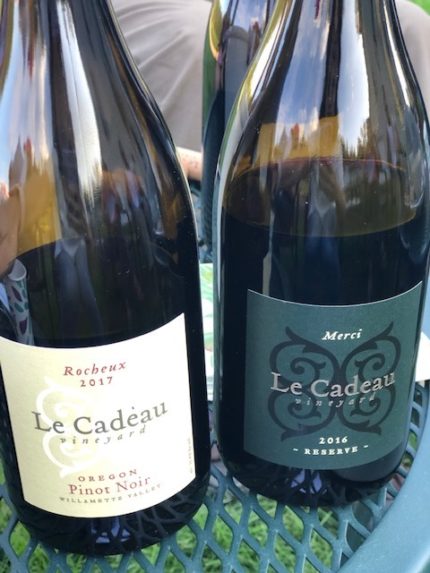 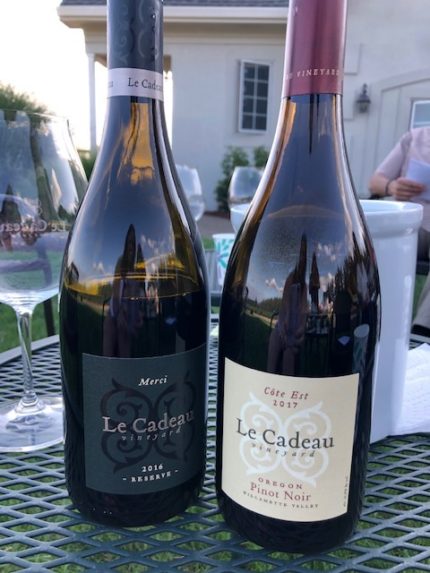 As we tasted our four wines from different places in the vineyard, Tom remarked, “great Pinot Noir is made in the vineyard.”  You could taste the difference between the cooler and warmer climates as well as the different slopes.  The clonal stories may have gone over my head a bit, but I completely understand what I was tasting in my glass and appreciated immediately Tom’s meticulous nature in the vineyard.

2 thoughts on “A Return to the Willamette Valley: A Pre-Trip Exploration”