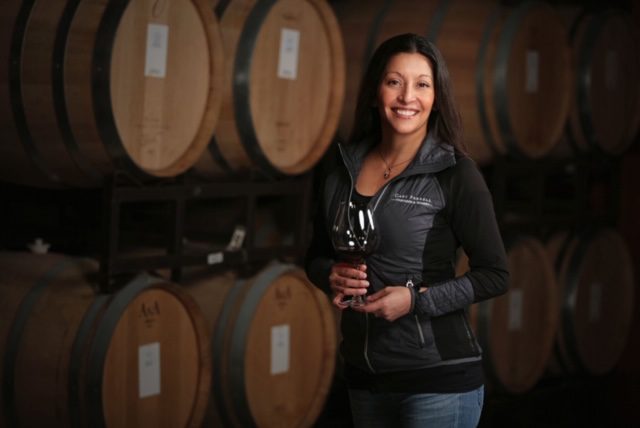 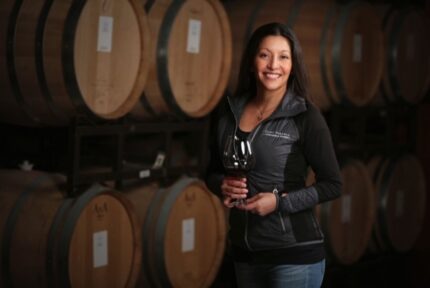 Pinot Noir is a grape that is not known for being easy.  As Natasha Hughes, MW, once said, “When Pinot producers get it right, the wines have it all: gorgeous aromatics, silky texture, bright acidity and supple tannins. What’s not to like?” 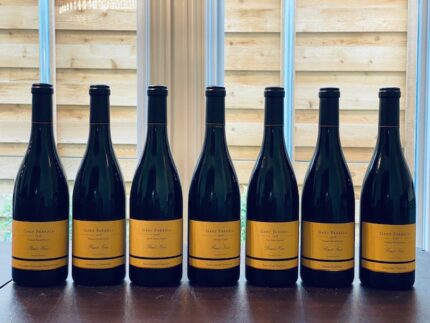 It’s not often that you get to try a variety of Pinot Noirs coming from different vineyards so you can taste the soil, climate and different terroir.  I had the chance to do that with seven expressions of one grape recently with Theresa Heredia, the winemaker for Gary Farrell Winery.  I’ve tried the several of the wines before and they are great, but never in this type of format.

Since the late 1970s, Gary Farrell Winery has produced small lot Russian River Valley Pinot Noirs and Chardonnays from single vineyards.  Through the years, some of the top vintners in the Valley have been affiliated with the winery including Davis Bynum, Joe Rochioli, Tom Dehlinger and Robert Stemmler.

Heredia joined Gary Farrell Winery in 2012 after a 10-year stint at Joseph Phelps Freestone Vineyards. After receiving a bachelor’s degree in biochemistry, she began working on her Ph.D. in chemistry at UC Davis with a focus on cancer therapeutics research.  She was a graduate teaching assistant with 11 other teachers and when the students with the wine chemistry major brought wine to a study session, she re-evaluated. She realized she could marry her love for Burgundy, Bordeaux and Rhone wines and she shifted course.

That led her to a job as the enologist at Saintsbury in Napa in 2001.  In 2002, she joined Joseph Phelps Vineyards where she worked at Freestone Vineyards, making every vintage of Freestone wine, starting with the first one in 2002.

The chance at Gary Farrell was one she couldn’t miss.  “The chance to have access to these iconic vineyards in Sonoma and the Central Coast was the ultimate opportunity in experimentation,” she told us. 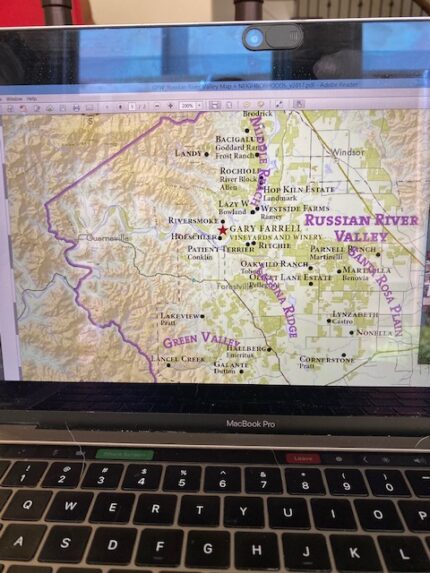 Depending on the year, she now makes twelve to fourteen Pinot Noirs, as well as six to eight Chardonnays and a Zinfandel.

Her winemaking focuses on the expression of place for each vineyard and the quality of the fruit that is sourced from different California vineyards.

We tasted through seven of the 2016 Pinot Noirs, which differed completely in their expression of their heritage.  This was a year with moderate weather across the board in all of the vineyards. 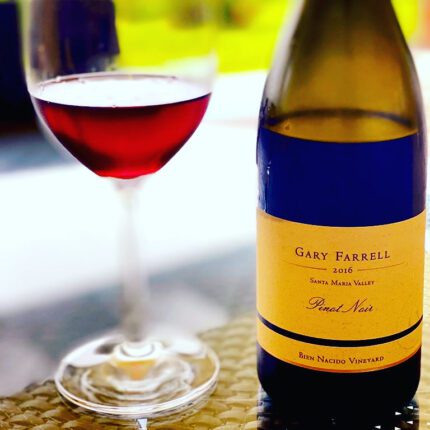 It was amazing to see what seven expressions of one grape could do.

Gary Farrell has been sourcing grapes from the Bien Nacido Vineyard, one of the most prestigious sites in the Santa Maria Valley, for over 20 years.  Theresa laughingly referred to this one as a “sexy spice box.”

This cool climate Pinot had notes of juicy red fruit, cumin and spice. I loved how this Burgundian wine was completely different from the others – well established in its sense of place.

Fort Ross Vineyard is located in the far west part of the Sonoma coast and is the closest vineyard to the Pacific Ocean. With its sun exposure and high elevation of 1,400 to 1,450 feet, you taste the succulence of the fruit in this wine.

We then tasted two different Hallberg vineyard wines made from different clones.  The 100-acre vineyard located in the Green Valley; a lower elevation vineyard cloaked in fog is named for its previous owners.  Today it is managed by Vineyard Manager Kirk Lokka.

Theresa talked about the “pinocity” factor in this wine, a favorite term of hers to describe what characterizes a great Pinot Noir.  This blend includes the 777 and 667 clones.  Lots of floral notes with spice, red fruit, tobacco and black tea.

This was a dark, palate driven wine with a blend of the 667, 777, 828, Pommard clones and what is known as a “suitcase” selection.   This was a rustic wine with notes of earth, cherry cola, black tea, eucalyptus and spice.

This was a wine that was denser, chewier and had more acid than the others.  I loved it.  The winery is located in Santa Rosa and the vines are planted similar to how they are in Burgundy.  I tasted oolong tea, black and blue fruit, flowers and herbal notes.

This was the wine that begged for some age, but was the favorite of most of our tasting group.  Gaps Crown Vineyard is considered by many to be one of the top vineyards located in the Petaluma Gap in Sonoma County.  The area is known for being very windy and influenced by the coastal fog of the Pacific Ocean.

You can see that in eight years, Heredia has become an expert in bringing the terroir, the varietals and the vineyard to life.  Her expression of each unique sense of place in each bottle shows her skill and mastery of this tough grape.