Wines of Roussillon: A Chat with Sommelier Caleb Ganzer and Snooth’s Mark Angelillo 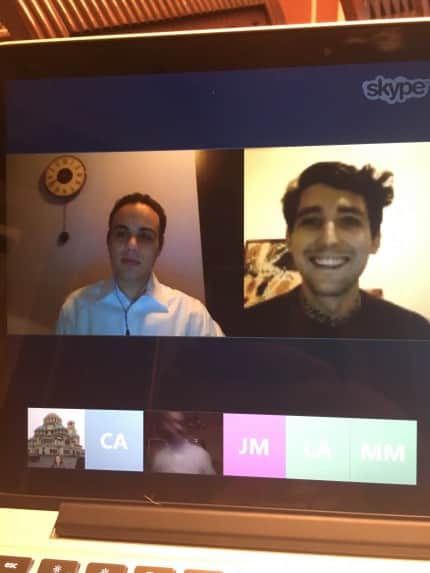 Caleb and Mark, Co-Hosts for the Session

The Roussillon wine region is all about passing along wisdom, the culmination of thousands of years of history and a place with a personality exemplifying character and honesty.  Before I attended Snooth’s Wines of Roussillon media event, hosted by Caleb Ganzer, a sommelier and Wines of Roussillon expert, and Mark Angelillo, co-founder/CEO of Snooth, I didn’t know the extent of the important story housed in this region and in these wines.

There is a misperception about the region that needs to be changed.

The Languedoc-Roussillon region spans the Mediterranean coastline from the French border of Spain to the region of Provence.  It has 700,000 acres under vines and is the single largest wine producing region in the world – eclipsing other wine regions.

The Roussillon wine region is a different and a smaller piece of the Languedoc-Roussillon located near narrow valleys around the Pyrenees.  It is open to the Mediterranean Sea to the East and three rivers, the Agly, the Tet and the Tech, define the topology of the region.  Why is this important?  Think of the differences of a boutique winery – smaller production, greater concentration on the terroir and more focus on what is in the bottle – vs. a winery that ships 2,000,000 cases of mass produced wine.  Caleb categorized it as a “gem in the rough” in a region that is known for wines for a larger mass market.

The Roussillon region, which was acquired by the French from Spain in the mid seventeenth century, was once known as a producer of sweet wines.  However, with the Old Vines of the region and more than 20 soil types in the mountainous region ranging from chalk, limestone, gravel and alluvial soils, some vineyards decided to make the pivotal shift to making dry table wines.  I would characterize most of these having concentration, extracted flavor and intensity and is one heck of a value as compared to many other Old World wines. 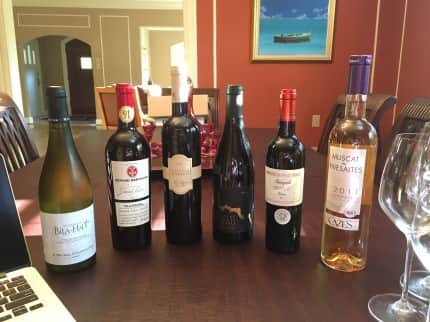 2014 Côtes du Roussillon Blanc: Michel Chapoutier, Les Vignes de Bila Haut – this is the only wine with Texas distribution and I had the opportunity to try it prior to this tasting. I absolutely adored the fact that Michel Chapoutier was one of the pioneers of providing Braille on the label – making wine accessible to all as it should be.  It was a combination of Grenache Blanc, Grenache Gris and Macabeu with a mix of tropical, citrus and floral notes and a nice minerality.

2011 Côtes du Roussillon Villages Tautavel: Gérard Bertrand, Tautavel Grand Terroir – this wine was a combination of Grenache, Syrah and Carignan.  Bertrand is known for owning some of the most premium wine estates in the South of France and is known for wines expressing the unique terroirs of the region.  The soil is chalky and I tasted black cherry, plum, boysenberry, mocha, cocoa powder and the nose was almost port-like.  Wine Writer Meg Houston Maker likened it to the French version of Malbec with its concentration, acidity and balance.  This wine would stand up well to Texas BBQ.

2013 Côtes du Roussillon Les Aspres: Château Planères, La Romanie – also grown in mountainous terroir with clay and gravel soil, this wine was made of Syrah, Mourvedre and Black Grenache.  It was a rustic Old World wine with notes of menthol, spice, black fruit and I think will be spectacular with some more time in the cellar or the right food pairing.

2013 Maury Sec: Domaine Cabirau, Cuvée Serge et Nicolas – described as the prototypical most picturesque and beautiful village that postcards are made of, this wine was nuanced, earthy and delicious.  Definitely one of my favorites from the tasting.

We then moved to the sweet wines of the region – including one made from Muscat and then to a red fortified wine of the Banyuls.  The 2011 Muscat de Rivesaltes : Domaine Cazes had notes of honeysuckle and flowers made from two different muscat grapes.  The 2014 Banyuls Rimage: Domaine La Tour Vieille, which was made of grenache, had notes of raspberry, godiva chocolate and plum.

My big takeaway was the diversity of the region, the range of styles and an increased focus on quality.