Last weekend I took my first trip back to Auburn University since I graduated in 1992 (in case you are wondering I graduated when I was 10 years old).  I had a very close-knit group of six friends that became my running buddies.  After all reconnecting on Facebook (go social media), we planned to reunite in Auburn for the opening game of the season with our families in tow.  Since my last Auburn football drinking experience was comprised of bourbon and coke or Gallo blush wine in a Big Gulp cup with ice, I decided I would bring a few bottles of wine (or nine) to show that “Weezie had moved on up” and so I didn’t need to navigate finding “off the beaten path” wine at a shop in Auburn, Alabama. 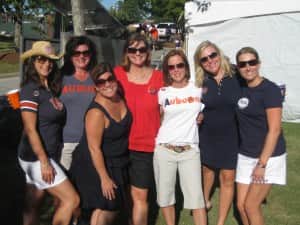 As I looked around that first Friday night at this group of women that I loved with all of my heart and because I liken many situations back to wine for the purpose of Dallas Wine Chick, I realized that I had inadvertently chosen wines that reminded me of my friends and how we evolved from crazy college kids to the women we are today.  In the spirit of full disclosure, I have one friend who has turned into a beer aficionado and other than champagne in mimosas, has no use for the grape.  Because of our friendship, we have agreed to disagree.

Capalanca Pinot Gris Sueno Profondo – this reminded me of when we all first met.  Our outlook on life was fresh and crisp – we had the whole world ahead of us and the world was literally our oyster (coincidentally this wine would go well with oysters).  Fresh and crisp also translated into young and stupid at times, not with this wine, but with this group back in the day.  I may or may not have dropped a class once because a test coincided with Kappa Alpha’s Old South three-day party.   I do believe that my friends are a bit incredulous that I eventually found career success in my chosen industry of public relations due to my college choices.

David Arthur, Sojourn and Del Dotto St Helena Cabernets — This is when we became much more nuanced as we matured.  We realized that we were no longer the center of the world (at least most of us did).  We were knee deep in kids, families, careers and the realities of life.  Like these wines, we were working on balance – trying to be a good wife, mother, employee, friend, relative, etc. – and often because of our Type A standards, failing miserably in our own eyes.

The “Off the Beaten Path” Phase (now – you read between the lines, okay?)

Quinta de la Quietud Toro, Turley Duarte Zinfandel, Mi Sueno, Fefinanes Albarino “1583” – We’ve reached the stage of being comfortable in our own skins — working to find balance from realizing that family and friends are the most important things in the world.   For me, this is the most fun stage.  As I say, “it is what it is” and you realize that you no longer care about appearances the way that you used to in your youth.  As I reconnected with my friends and got to know their families, I realized that we all did well on the most important thing in life – raising well mannered, ethical, smart and fun kids.

While times have definitely changed and we have a few more wrinkles than we used to as well as 17 kids (holy crap – 17 kids) between us, it felt like time had stood still when we got together.  So much had changed – a successful battle with breast cancer, deaths/illness of parents, one of us now lives in Saudi Arabia – but so much remained the same including the fact that we were all still married to our college or right after college sweethearts.

While I don’t like to admit that I have hit my 40s, I’m looking forward to what the next wine phase will bring.