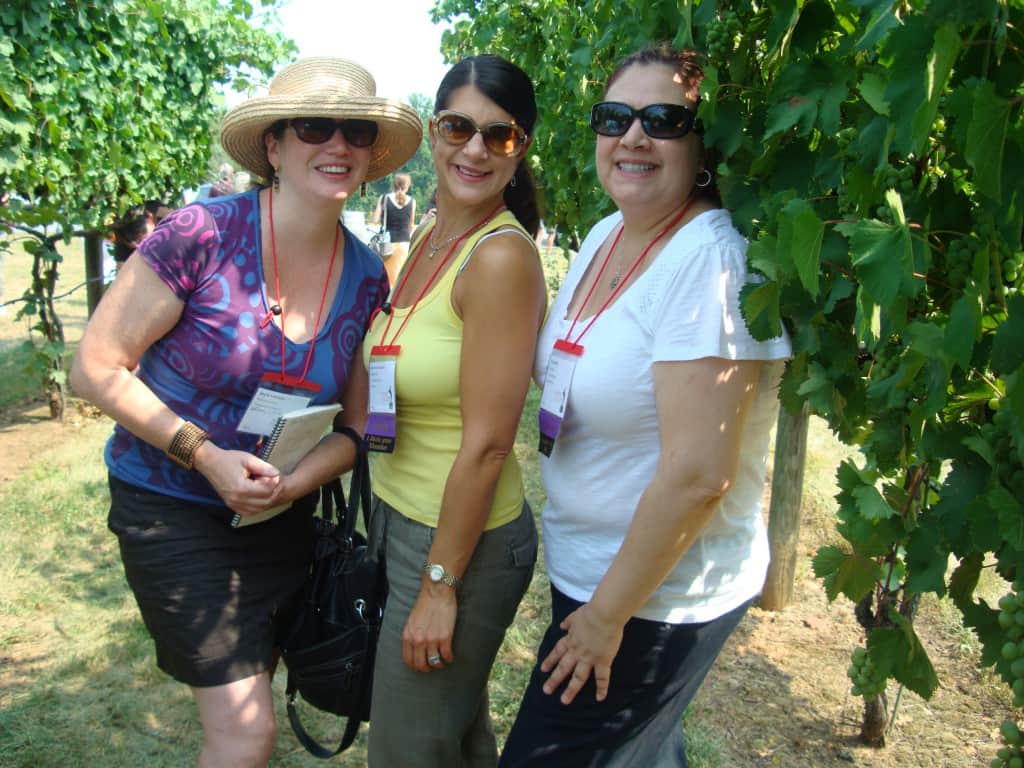 The tough thing about doing a series on an event like the Wine Blogger’s Conference is that by the time you reach the fourth article, your story is old news.  You already know about the well received keynote from Jancis Robinson, who has a list of accomplishments including www.JancisRobinson.com, writer for the Financial Times, and editor of The Oxford Companion to Wine and co-author with Hugh Johnson of The World Atlas of Wine.  That was a good thing for me as I was stuck in my room on a work conference call and was glad it was well documented.  Also, Eric Asimov of The New York Times had some great things to say about responsible journalism, democratization of wine and paths of wine knowledge and appreciation.

You already know that it was unseasonably hot – even for a Texan — in Virginia, at the wineries and at Monticello.  If you’ve been following closely, you might even know who decided to learn about Virginia wines and those who decided they had better things to do and ignored all things Virginia while attending the conference.

You’ve heard that speed tasting was met with mixed reviews.  It’s hard to put a box wine up against a $90 reserve Cabernet and expect positive results.  There has to be a better way to make this a fair game.

My biggest takeaway on Virginia wine was the European influence on its winemaking.  From Barboursville to Tarara to Breaux, European winemakers and wine consultants are the norm here, and Virginia seems to be on the map as a destination for U.S. entry. Winemakers like Dennis Horton of Horton Vineyards traveled to Southern France before planting a single Viognier grape. Bordeaux, Portuguese and Spanish varietals are abundant.  Wines I would consider to be non-traditional to this region like Albarino, Nebbiolo and Petit Manseng are being offered.  This will be an interesting place to watch as some of the top European wine makers and wine families are playing here.

And now for the fun stuff – the winery bus tour.  Attendees are broken into seven groups and each group visits two wineries and has lunch.   Last year, we had a great experience at one winery and the other seemed to be bothered that they had to deal with us.  This year karma smiled upon us as we found out we would be visiting Horton Vineyards and Barboursville Vineyards.  Score! 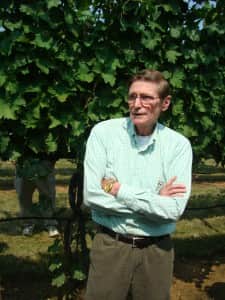 We started our tour at Horton Vineyards and got to meet one of Virginia’s innovators, Dennis Horton.  Dennis started with a home vineyard in 1983 and founded Horton Vineyards in 1989.  Horton Vineyards is a 110-acre estate that has more than 20 grape varieties.  He is credited for the first viognier from Virginia (1992), the first cabernet franc (1991) and reintroducing the Norton grape (1992).  I also had a chance to try the Norton Sparkling Viognier during a Twitter tasting prior to the conference.  It was my favorite viognier that night and it remains my favorite of the Horton wines. 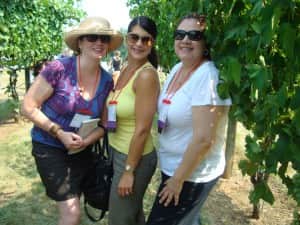 We started with a demonstration of methode champenoise to show the hand-crafted nature of the Sparkling Viognier.  In Dennis’ own words, “It’s hard to label this shit. “  Yes, Dennis, I agree – what a labor of love! 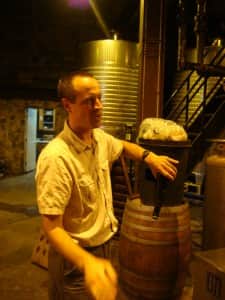 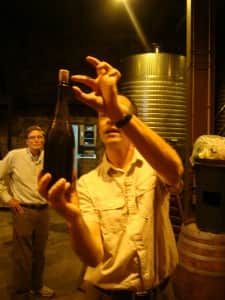 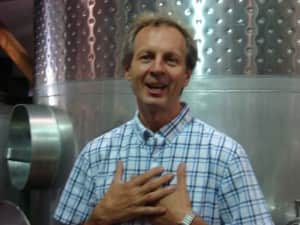 Our next stop was Barboursville, which was exciting enough until we found out about lunch at Palladio, its James Beard award-winning restaurant.  Winemaker-General Manager Luca Paschina and Owner Gianni Zonin, greeted us at the front of the winery and talked to us about the history of Barboursville Vineyards.  The second-generation estate house at the Barboursville plantation was designed by Thomas Jefferson for his friend, James Barbour, who became the governor of Virginia and a Senator.  Sadly, the estimate burned down in 1994 and the family returned to the residence that today is the 1804 Inn.

Barboursville Vineyards is Virginia’s first wine estate dedicated to growing European, vitis vinifera wine varietals.  Zonin’s family has been involved in wines since 1821.  Barboursville is the family’s only venture outside of Italy (they have seven estates there) and consists of 900 acres.

I had the chance to meet Luca, who has been at Barboursville for 21 years, at a conference event prior to the tour.  He told me, “Like a chef loves to work in the kitchen, I love to work in the cellar.”  His passion for wine and dedication to the vineyard showed immediately and I was thrilled to have chosen my bus well.

We were led through the winery into a room where several culinary stations were set up and Chef Melissa Close Hart and her fabulous team enticed us with an antipasta station, a pasta station, a pork loin with a cherry sauce and a to-die-for dessert table.  My heartbeat sped up when I found tables set with verticals of most Barboursville wines.  Gianni Zonin led us in a lovely toast in Italian, that was translated by Luca, with the Barboursville Brut sparkling wine. 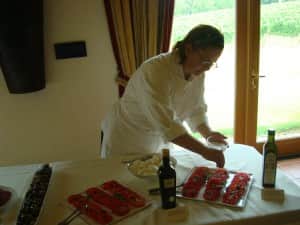 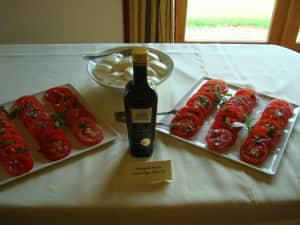 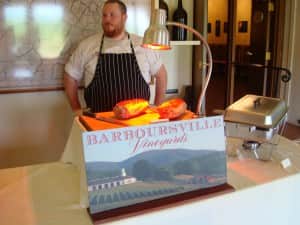 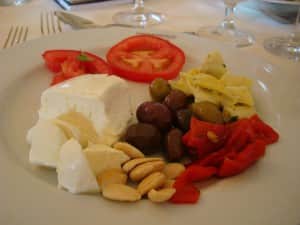 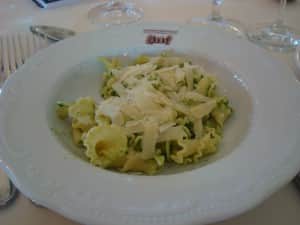 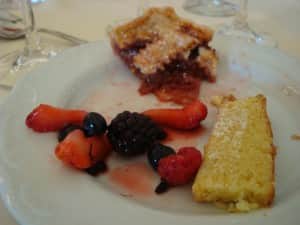 I didn’t try everything as there were so many to try, but  David Honig and I had a fabulous time trying to describe the wines.  I think if there’s ever a market for a comic duo to taste wines, we might get to quit our day jobs.  And, we tried to some fabulous wines – ranging from Viognier to Cab Franc to Nebbiolo to the much lauded Octagon wines and with reason.  In the spirit of full disclosure, I also shipped home a case of Barboursville wine because I enjoyed them so much. 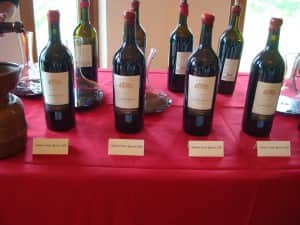 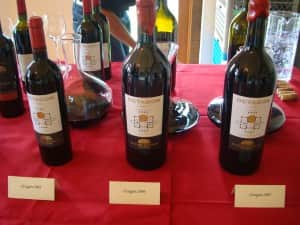 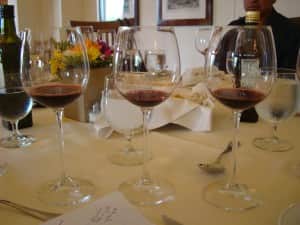 Some of the verticals of wines that I tried included:

–          02 Viognier Reserve, (also 04, 09, 10) which was my favorite white.  This was a classic Virginia viognier and found interesting the changes in fruitiness and minerality depending on the age.

–          01, 06 and 07 Malvaxia Reserve Passito, the dessert wine.  The 01 was darker, caramelized with butterscotch notes and more acidity.  The 06 was much fruiter, but less floral with notes of orange blossom and honey.  The 07 had a tough of clover honey, was less aromatic and had more floral notes.

We also had the chance to sit with viticulturist Fernando Franco, who has been at Barboursville for 13 years and very patiently answered any question we had and suffered through David and my descriptions of the wine.  It was a delightful day. 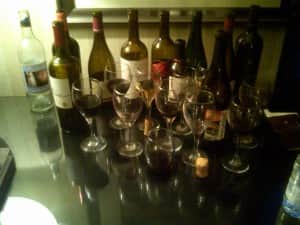 The Remnants of Our Afterparty on Sunday Night

Now some conference advice for next year.  For those who are new, I would urge you to immerse yourself in the experience.  Get out there, meet folks, watch Twitter for party updates and put yourself out there.  Bring wine and host a party in your room if you want to meet folks (and apologize profusely if it is corked)!  While the wine experience is fun, it’s the people that make the best memories.  Also for the love of god, attend the pre-conference!  I can’t emphasize this enough. Twenty bloggers are much easier to manage than 300, and I can’t tell you the value that $95 bought for my Loudoun County wine experience.  I walked in the conference with a familiarity that can only be gained through experience of tasting wines from some great wineries I may have missed.  I dare say that I would have had a very different Virginia conference experience if I had missed this trip. 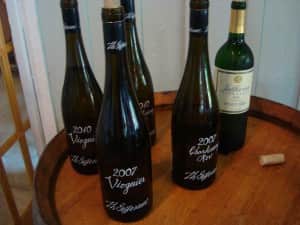 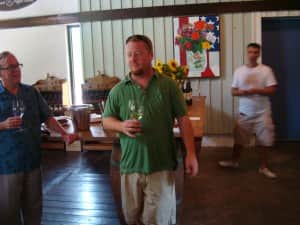 Stay on Sunday after the conference.  We had a delightful visit with Andy Reagan from Jefferson Vineyards who hosted a small group of remaining bloggers for lunch and poured his lovely Pinot Gris, 07 Cabernet Franc, 07 Estate Reserve, 07 Cabernet France Reserve and the 01 Cabernet Sauvignon.  It was a fun, non-pressure gathering of good friends and good wine.  Again, another positive Virginia wine experience gained in a small, casual setting.