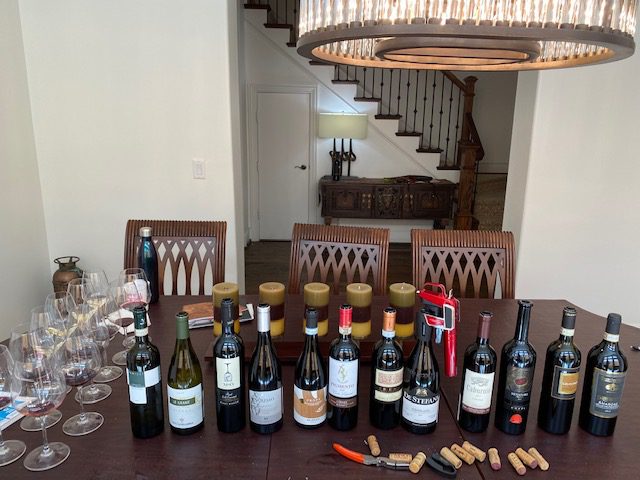 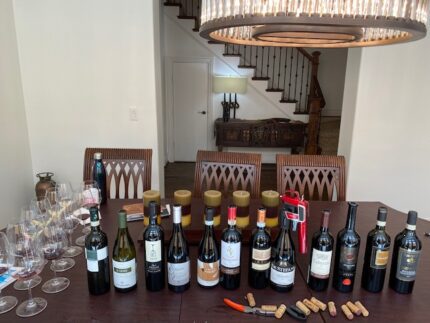 Gambero Rosso, an authority on Italian food and wine, is known for the release of its anticipated annual Vini d’Italia (Italian Wines guide) where it awards the top wines the “Tre Bicchieri” designation.  This is an effort of 60 professional tasters who rank more than 2,400 producers and over 40,000 wines.

As a celebration of this guide, the Italian-based media company, typically holds events featuring the “Tre Bicchieri” wines for press, sommeliers, distributors and consumers in conjunction with a series of small Master classes for the trade. 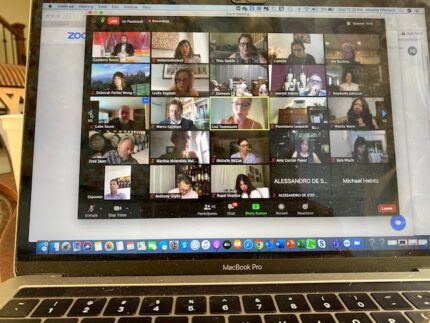 Due to the pandemic, the event was virtual.  A small group of 25 Sommeliers and writers gathered with Marco Sabellico, the guide’s editor-in-chief, to discuss 12 wines in a Master class on Zoom. 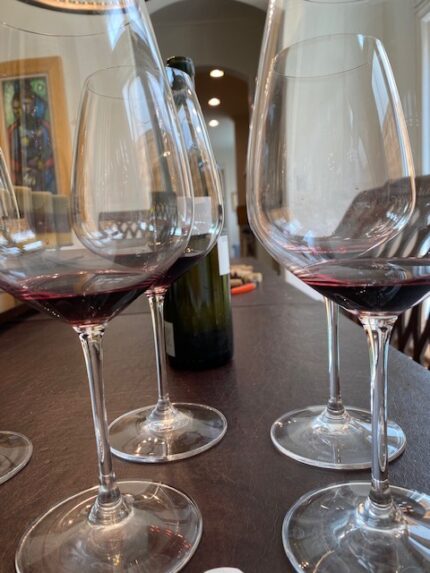 Here’s an overview of the wines that we tried: 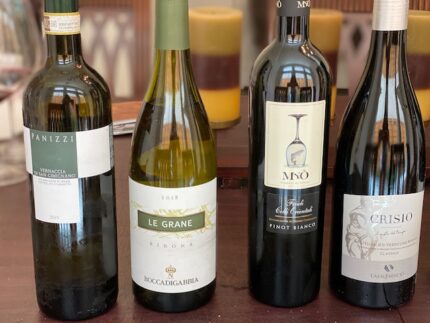 For 30 years, Panizzi has been making wines mostly from the Vernaccia grape, which was once the most widely exported Italian wines during Medieval times and is a modern interpretation of a wine that is about 800 years old.  The name Gimignano on the label refers to the town in Tuscany where the Vernaccia vineyards are located.

The 2019 Panizzi Vernaccia di San Gimignano is made mostly from Vernaccia grapes with a percentage of Manzoni and Trebbiano.  It’s a very drinkable white with an affordable price point at $18. It had notes of white flowers, peach, apricot, citrus and a great minerality.

The Boccadigabbia estate dates back to the annexation of the Marche region to the Napoleonic Kingdom of Italy by the imperial decree at Saint Cloud on April 2, 1808.  It stayed in the hands of a descendent of Napoleon Bonaparte, who introduced French varieties among the grapes on the property.  It was purchased in 1956 and is now owned by the Alessandri family.  Elvio Alessandri planted Sangiovese, Ribona, Montepulciano and Verdicchio.

The 2018 Le Grane was made from 100% Ribona grapes and retails for about $18.  Whole grape berries were added to the wine.

It’s a savory wine with notes of white ginger, sage, lemon curd and grilled pineapple. I see lots of aging potential in this wine.

Five generations of family run Zorzettig FCO, where Annalisa Zarzettig operates the winery while Alessandro, her brother, is in charge of the vines.  The winery was founded in 1986 by Giuseppe, their father, and is located in Friuli Colli Orientali, which is known for a unique microclimate for the winds of the sea.

The 2018 Myò Pinot Bianco, which retails for $27, is the flagship wine for them.  It was very fresh with notes of Meyer lemon, yellow apple, buttered brioche, apricot and a great minerality.  A very distinctive wine that retails for $27.

Casalfarneto is located in the Marche region and is located in the most ancient and historical area of Verdicchio Classico, specializing in Verdicchio as well as an additional 7 hectares of red grape vineyards focusing on Montelpulciano, Sangiovest, Merlot, Cabernet and Petit Verdot.

This wine was a Reserva wine, which requires aging for 18 months.  It came from the winemaker’s desire to produce a Chablis style wine.  The grapes for the 2016 Crisio Riserva are harvested in three different batches, made separately and then blended together.  I tasted Meyer lemon, apple, nutmeg, apricot and spice.  Retail is $30. 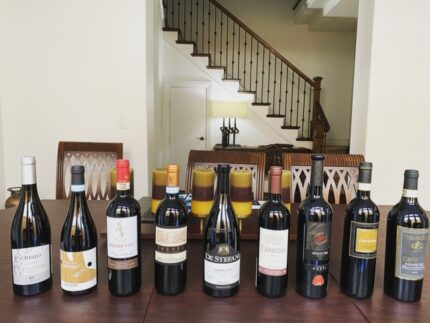 The Velenosi winery was established in 1984 by Ercole and Angela Velenosi, two young entrepreneurs with a passion to make great wines.

The wine is made from 100% Montepulciano d’Abruzzo grapes and is a bargain at $15, when it is available in the US.  In this wine, they wanted to bring back the strength and elegance of what this wine once was before it was over produced in the region.  I tasted plum, cherry, blackberry, dried fruit and spice.

This winery has been in the Leopardi Dittajuti family for 15 centuries and has a storied history where one ancestor was made a bishop, murdered and then was sainted.

The Conte Leopardi winery is owned today by Count Piervittorio Leopardi Dittajuti, who is responsible for the investment in the new vineyards and modern machinery.  The Conero Pigmento Riserva was made by winemaker Riccardo Cotarella from 100% Montepulciano.  Priced at $38, I tasted dark cherry, forest floor, vanilla and licorice.

The family is one of the founders of the Serenissima Republic of Venice.  The Giordano Emo Capodilista – La Montecchia estate has been in the family since the Middle Ages and is located on the hill of Montecchia.  The wine is part of the Colli Euganei appellation, which is known for its Volcanic soils.

There are two vineyard sites almost in the Alpine territory of Selvazzano and in the extreme south near Baone with different terroir.  This wine is 90% Cabernet Sauvignon, 6% Merlot and 4% Carmenere and includes a process where the grapes are dried.  This wine ages 12 months in barrique barrels, then 6 months in a bottle.  I tasted meat, blood orange, eucalyptus, graphite, candied fruit, olive tapenade, balsamic, spice and herbs.  The wine retails for $30.

Definitely one of the heavy hitters of the tasting with a price tag to match at $120.  In the second half of 1800, Valeriano De Stefani the founder of De Stefani winery decided the best soil to plant wines was on the Colvendrame estate in Refrontolo.  Today, the De Stefani Winery is run by Owner and Winemaker Alessandro De Stefani.

The 2015 De Stefani Colli di Conegliano Rosso Stefen 1624 was made from 100% Marzemino and it was unforgettable.  Deep, dark, nuanced and elegant with notes of honey, blackberry and orange zest.

In the late 1990s, Paolo and Gemma Baratta decided to pursue a passion from long ago and establish a vineyard in the southern Maremma area.  The fields are protected by the Monteti hill from which the estate takes its name.

At the time, the area was not tested in its wine production and was just land and a collapsing house.  Gemma, Paolo and Oenologist Carlo Ferrini sensed potential and Tenuta Monteti was born.

This wine is a blend of 50% Cabernet Sauvignon, 25% Alicante Bouschet and 25% Merlot and retails for $21.  I tasted notes of blueberry, black currant, mocha, cinnamon, cranberry and spice.

Coppi Winery has been producing wine for over 40 years, but the family has been farming grapes for more than 100 years.  It currently owns 100 hectares of vineyards in Puglia, in the DOC Primitivo di Gioia del Colle and Negramaro as well as another 100 hectares under permanent lease. Coppi Winery has a policy of only producing wines only from 100% indigenous vines:  Primitivo DOC Gioia del Colle, Negroamaro, Aleatico, Falanghina, Malvasia Bianca, and Malvasia Nera.

This wine is from Puglia and is 100% Primitivo. It was succulent with notes of dark red raspberry fruit and spice.    Retail price of $30.

Founded in 1978, Tenute del Cerro started with the first acquisitions of Montecorona in Umbertide and Fattoria del Cerro in Acquaviva di Montepulciano and subsequently expanded acquiring La Poderina in Montalcino, Còlpetrone in Gualdo Cattaneo and Monterufoli in Monteverdi Marittimo. The properties are owned by Unipol Group.

Armando, Tiziano, Paolo and Massimo Castagnedi were four brothers who had a shared passion to make the best wine possible that originated growing up in their father’s vineyards at San Zeno di Colognola ai Colli, in Valpolicella.

Sant’Antonio is known as the father and protector of the poor.

The Tenuta Sant’Antonio wine is made from 40-year vines that include 70% Corvina and Corvinone, 20% Rondinella, 5% Croatina and 5% Oseleta.  The grapes undergo the appassimento method of partially drying out the grapes for about 100 days and then are aged in cask for three years.  It’s an intense wine with black fruit, spice, cherry, tobacco and chocolate.  Retail price of $73.

This was a great opportunity to learn about the great wines of Italy curated by Gambero Rosso with winemakers and producers from all over Italy and drink some wines that often don’t make it easily to Dallas.