Prosecco. It’s often known as key ingredient for mimosas, bellini’s, spritzes or fizzes.  But if you really look at authentic Prosecco — beyond what lines grocery store shelves in America — you’ll discover that it can be delicious, well-priced and will make you want to hold the mixer.

I had the chance to dive in during a recent Wine Studio educational program with Susannah Gold, DWS, FWS from Vigneto Communications as we explored Val d’ Oca.

Val d’Oca, one of Italy’s oldest and largest producers of Prosecco under the Cantina Produttori di Valdobbiadene, was established in 1953 in an effort to revive the economy devasted by World War II. It is comprised of 576 growers and over 1,000 hectares of vineyards. Widely regarded as one of Northern Italy’s largest wine makers as well as scenic locales, Val D’Oca is an agricultural company known for high quality Prosecco production.

The Vineyards and Terroir

Situated in the countryside north of Venice, the Val D’Oca vineyard is located between Asolo and Conegliano.  It is known for a mild climate with south facing slopes that are 15 to 170 meters in steepness  and sun exposure year-round. Sixty percent of vineyards are DOCG quality and are located in the hills.

The “Rive” is a sub-appellation created by the Tutelary Consortium that identified the single areas in the region between Conegliano and Valdobbiadene to best grow Glera grapes. They are terroir-driven wines that show the character and uniqueness of the land where the grapes are grown. There are 43 Rive microclimates and expressions of individual terroirs, or a microclimate of a smaller parcel of land. Val D’Oca is the only producer to have nine Rive wines.

Val D’Oca is the first co-op to have a sustainability budget and an impact plan with goals until 2030. They control their entire supply chain, are 100 percent energy self-sufficient and bonuses are given to the members for certified organic grapes and DOCG wines.

Val D’Oca has embraced technology to monitor things like harvest conditions with new systems while staying true to ancient wine making traditions to preserve the quality of the wines. This includes investments in vinification and laboratory controls. 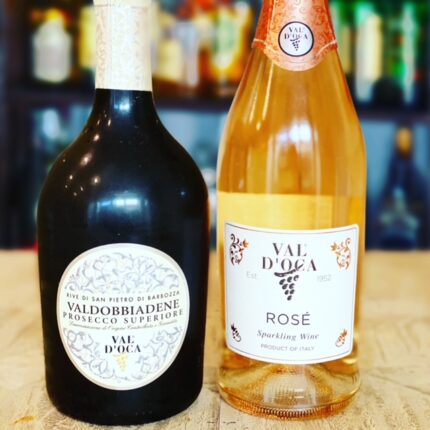 • Val D’Oca Rosè ($14.99) – notes of raspberry, spice, strawberry and white pepper. Pinot Noir is the only red grape allowed in Prosecco and is blended with Glera in the Charmat method.