Two Years Later: A Catch Up with Peter Mondavi Jr from Charles Krug

Over two years ago, I had the chance to sit down with Peter Mondavi Junior, the co-proprietor of Charles Krug.  Our conversation focused on family, history, heritage, sustainability, good wine and hard work.  We talked about the strides that his father, Peter Mondavi Senior, and his innovations at Charles Krug ranging from vintage dating varietal wines, cold fermentation of white wines and fermentation in French oak barrels, and many more.

Last month while Peter was en route to the Austin Food and Wine Festival, we had the chance to sit down and visit again.

A lot has changed in two years.  Peter Mondavi Senior passed away the end of last year, but in talking with his son, his legacy will continue.  “All of Peter’s siblings lived until the 90’s and he lived until he was in his 100’s,” Peter said.  “Mark and I have worked underneath him for decades.  He taught us to be meticulous.  We will continue to carry on his philosophy and our foundation as we move the winery forward.”

Charles Krug is the oldest winery in Napa Valley and was founded in 1861 by Prussian immigrant Charles Krug.  Since 1943, and over four generations, the winery has been overseen by the Peter Mondavi Senior family.

Since the subject of women and wine and the lack of parity has been such a prevalent subject with the women winemakers I have talked to lately, I asked him about the opportunity for women and wine.  He talked about Stacy Clark, Charles Krug’s winemaker, and how he wanted to hire the best winemaker, who happened to be a women winemaker.  “It was all about carrying on the Peter Mondavi Family vision, but giving a talented winemaker the leeway needed to make great wines while still keeping alive the essence of the vineyards.”

He gave me an overview of the success of the hospitality center that was just opening during our last conversation.  The center was the final element of a $9.5 million restoration and beautification of the Redwood Cellar Building designed by noted architect Howard Backen.  It was named after the winery’s matriarch, Rosa Mondavi, and launched to celebrate Peter Senior’s 100th birthday.   They are working on putting together a culinary program as the next step as well as a vertical program to bring the extensive wine library to consumers.

There has also been an evolution in narrowing the portfolio to focus on the single vineyard, upscale, estate wines from eight vineyards over 850 acres located in St. Helena, Howell Mountain, Yountville and Carneros.

We tried several wines and Peter was still as passionate as ever in describing them and the stories associated with each one.  Each of these was delicious, but the Howell Mountain Cabernet is off the charts.

2015 Charles Krug Chardonnay – had an old-world style full of lots of citrus, tropical fruit and minerality.  This is the only wine made from non-estate vineyards from Los Carneros since they are replanting the chardonnay vineyards. 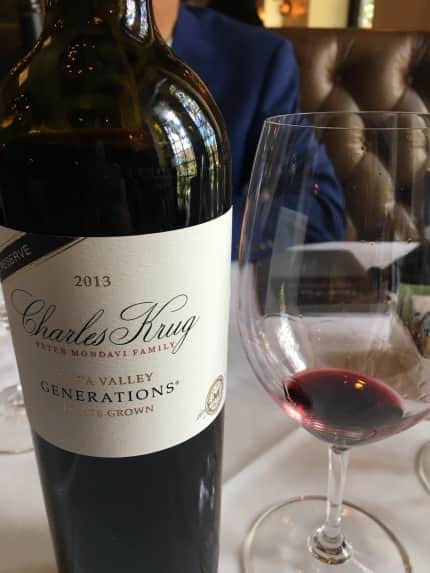 2013 Charles Krug Generations – this wine was designed to celebrate four generations of the Mondavi family.  Peter described it as a wine with “one foot in France, one foot in California.”  It was balanced with lots of licorice, anise, blueberry, blackberry and spice.   The first vintage of this was in 1991 and came about when Duckhorn had extra grapes that Mark used as an experiment when Mondavi Senior was on a sales trip.  It was their first Bordeaux blend and has evolved ever since. 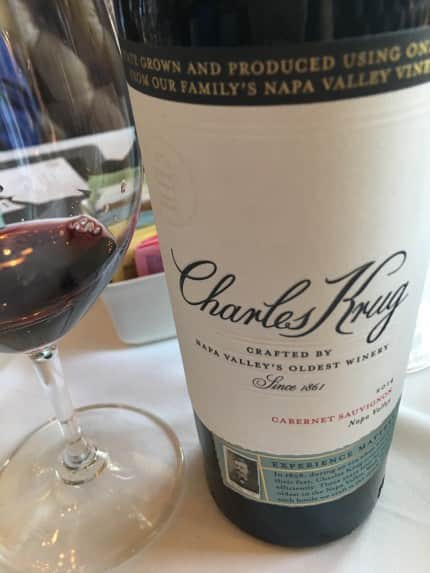 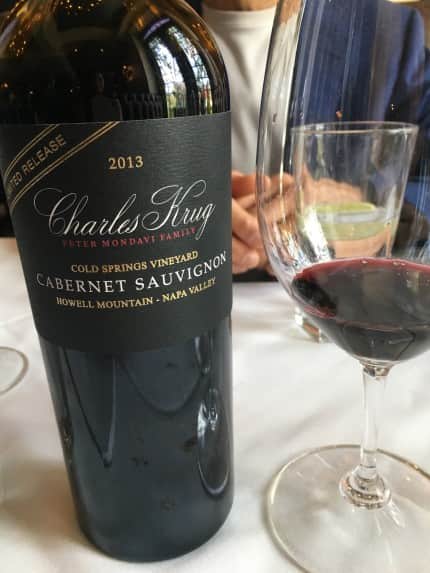 2013 Charles Krug Family Reserve Howell Mountain Cabernet Sauvignon – this was the third vintage of this wine and I loved the cranberry, cassis, spice, chocolate and black fruit.

The winery has a quote that seems to still bear true from its founder, Cesare Mondavi – “Treat the land with respect, and it will show in the wine.”  It is clear the tradition, heritage and commitment to family are still important tenants at Charles Krug Winery.