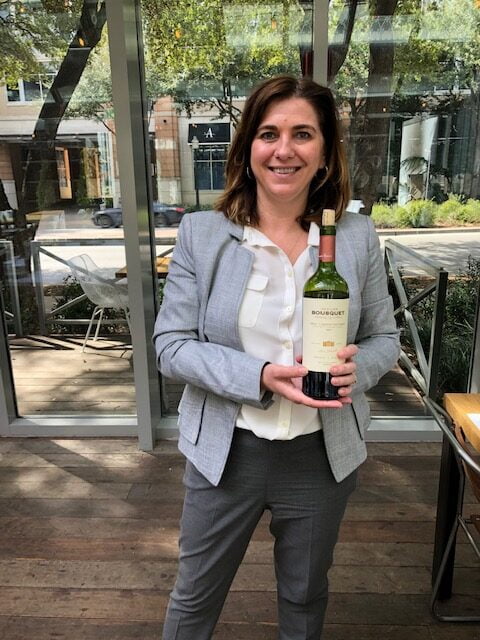 It’s been a little over two years since my Dallas lunch with Anne Bousquet, co-owner of Domaine Bousquet, the Argentinian shining star example of value-oriented, biodynamic and organic wines. I knew then this was a woman who would have a growth story to tell me the next time we met.

As I reflect on that meeting and my words then– “Lunch with Anne Bousquet is like sitting down with your accomplished friend who seems they can do just about anything but is so incredibly down to earth you can’t help but adore her.”

I was thrilled to be asked to virtually join Agronomist Franco Bastias and Anne Bousquet to try the latest vintages and talk about new developments in the winery.

What I Knew: The History

In 1990, the Bousquet Family arrived in Mendoza to research the vineyards and wineries. It was a tough decision to leave their homeland, but they knew the terroir in the Uco Valley in Argentina would make great wines with high altitudes, sandy soils and the ideal temperatures. Her dad, Jean, first went and found the ideal location and moved from France in 1997. He planted the vines, dug a well and started Domaine Bousquet. The 110 hectares vineyard is located in the Gualtallary valley in Tupungato, Mendoza.

The winery is the most awarded organic winery in the world. The Bousquet Family comes from Carcassonne in France and has a history of making wine. The goal was to bring together European wine making using the ideal conditions of the Mendoza climate.

Anne didn’t start out in the family business. She was a renowned economist for ten years in the pulp and paper industry where she spoke all over the world about the state of the market. For years, she toggled between her career as an Economist and helping with the family business while the winery was experiencing explosive growth. In 2004, she presented the family wines at a wine fair in Miami and was surprised to see the Malbec was a top winner in a blind wine tasting competition. This was the point where her husband, Labid, joined Domaine Bousquet leaving his career of stock trading at Fidelity to sell wine.

Another turning point for the company was in 2006 when Sweden decided it wanted to expand its Argentinian portfolio but needed to fill a percentage quota for organic wines. Domaine Bousquet wines were a perfect solution, and the country placed an order for 250,000 liters. It was time for Anne to join the company full time.

Anne talked about how she lived in Tupungato for several years, an experience she called “one of the best of her life”, but in 2015, she moved to Miami to build US sales and create an importing company for the winery. It was a pivotal move for the business, making it the only Argentinian winery with its own importing company while helping with distribution channels and costs.

She talked about the land and how important being certified organic was to the family. “We bought the land in 1997 and it was virgin land, she said. “We were one of the first to settle there and we have a duty to leave it in pristine condition.” In a past interview, she described the approach to organic as the difference between being “engaged and married.”

Growing In the Future

Since then, that marriage has grown into a three-pillar commitment — environmental, social and economic. These are commitments that have people, plans and certifications to carry them forward.

Aside from the certifications from every organic certification you can think of from ARGENCERT in Argentina, which is recognized in the U.S. by USDA NOP (National Organic Program) and in the European Union by ECOSERT to GNV-GL ISO-9001, they practice what they preach from respect of nature, the way they use filtered water and recycle what they use and the complete lack of chemicals.

As Franco said, “the land needs to be treated like we need to keep it for the next generation.” Domaine Bousquet now has 618 acres under-vine with all grapes grown organically, and they’ve helped growers around Tupungato make an organic shift using French traditional methods.

The next pillar is social and focused on giving back to their community. Domaine Bousquet has a Fair for Life certification, a third-party system that ensures agriculture companies honor human rights and fair working conditions in viticulture and winemaking.  It is a designation for respecting the ecosystem, and actively working toward the betterment of the region. They have donated $113K to those experiencing economic hardship and social exclusion.

The final pillar is economic, and this is very important to Anne personally due to her economist training. She wants to cultivate the community to make it a better place by making it robust. Approximately 95 percent of employees are local residents.

In talking about what is next, they talked about “Cultivating for a Better Future: One Pillar at a Time.” It’s about continuing the work in water preservation and improving their carbon footprint. A full-time environmental position has been created to make sure they are holding themselves accountable and making progress.

They have also started an import company to showcase certified organic wines coming from all regions. And coming soon in the fourth quarter is a World of Organic platform to make organic wines much more accessible and understandable for consumers.

We tried a lineup of diverse wines.  They were all well priced and all tasted more expensive than the price tag attached:

I always love a story that carries through the theme of making the world a better place — one wine at a time.