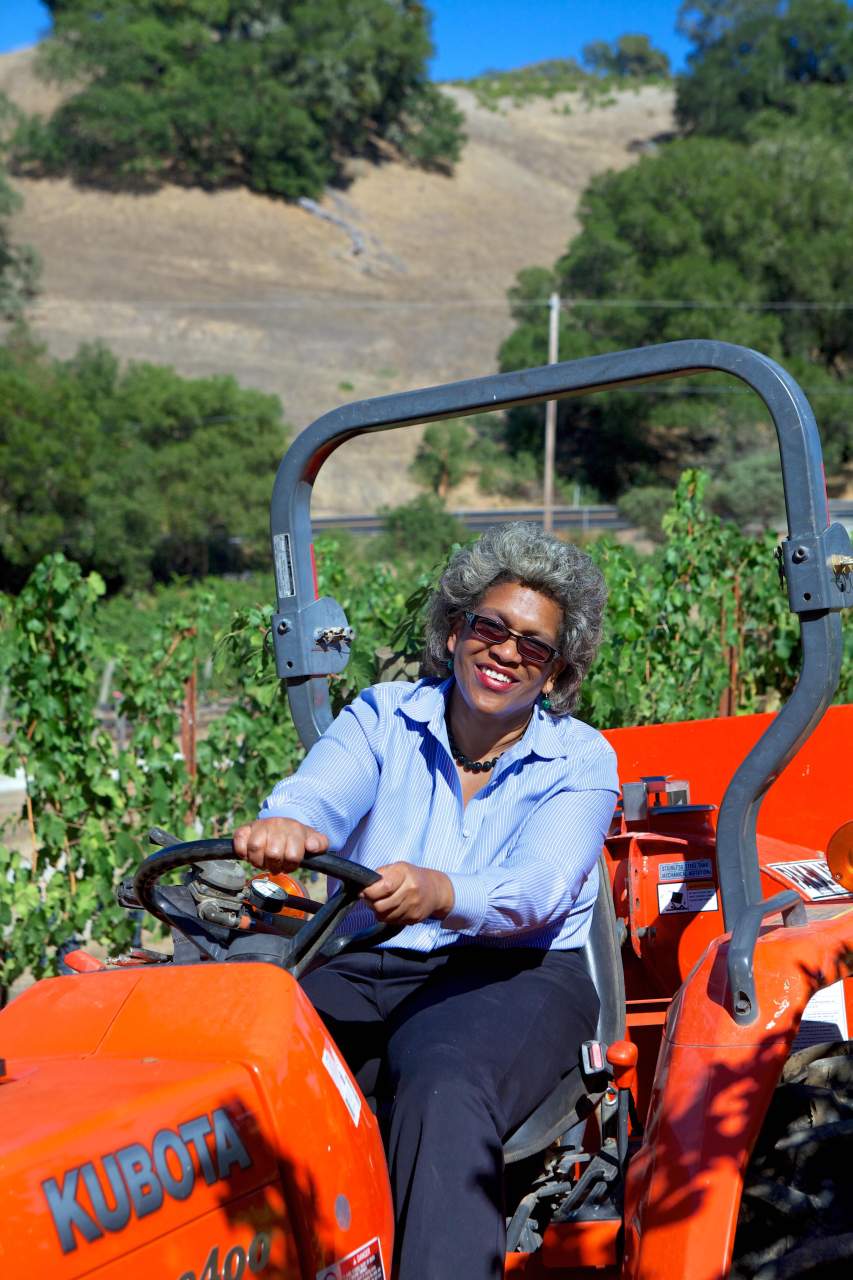 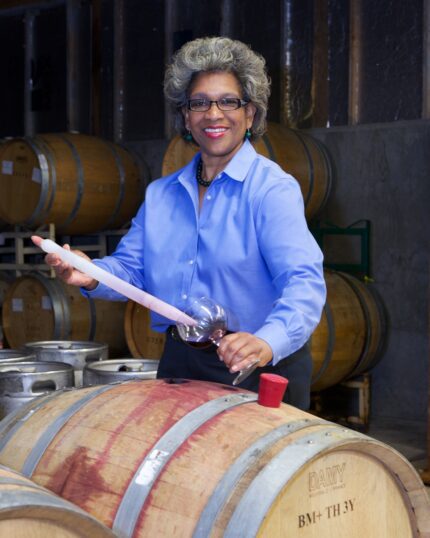 I still can’t remember at which event I met Theodora Lee, proprietor of Theopolis Vineyards, I just know she is unforgettable. I also remember her Petite Sirah as a stand-out in a room of California wines.

That’s just the way things go with this no holds barred, authentic, straight talking Texan, San Francisco trial lawyer and award-winning vintner and owner.  Theodora didn’t plan to make wine at first, she just wanted a weekend retreat as a getaway from San Francisco.  She found that in the future home of Theopolis Vineyards, which became a small vineyard and boutique winery located in the Yorkville Highlands of the Anderson Valley in California.

Theodora’s experience of wine was an evolution.  At one point, she didn’t drink.  Her association was a family member’s homemade wild muscadine, which still makes her shudder to think about.  That changed when she needed to bring briefs to partners and her firm’s mentors who had wineries in Healdsburg, St Helena or Oakville.  In spending weekends with them at the vineyards, she learned the art of fine wine.  Those moments led her to want to pursue this passion.

But let’s talk about her career evolution.  Congresswomen Eddie Bernice Johnson, who currently represents Texas’s 30th congressional district in the United States House of Representatives, sparked her interest in politics.   She went to Spelman College, earning degrees in Political Science and English and then won a full scholarship to The University of Texas at Austin for her law degree.  She spent a stint on the Hill in DC working for Senator Sam Nunn from Georgia.  She talked about how things have changed in today’s political atmosphere.

“Back in the day, we were getting things done in politics.  Today, we live in a time when no one is working together to do anything,” she said.  “It’s frustrating.“ 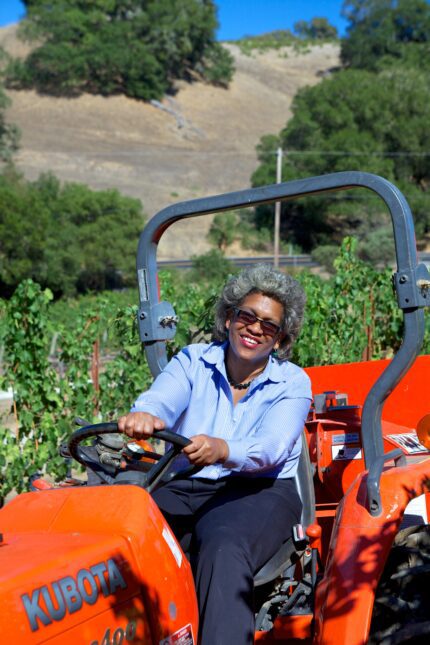 The art of wanting to tell a story moved her to be a trial lawyer.  Today she is a partner and trial lawyer at Littler in San Francisco.  But this was a girl who learned to drive a tractor on her grandfather’s farm at the age of eight, she had farming in her blood and she knew she needed to get back to the land.  Combine that with advice that her grandfather, who was once a sharecropper, drilled into her head – if you have money, you need to buy land. 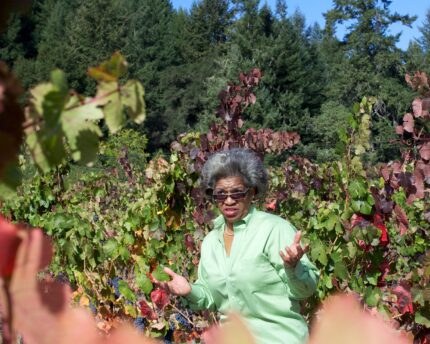 So, in 1988, she did and bought her first house and focused on the legal partnership track.  She decided to take viticulture classes at UC Davis and purchased a sheep farm in 2001.  After making the house on the property habitable, clearing the land and enrolling in several viticulture classes at UC Davis, she established a five-acre vineyard in 2003 with an intention of growing grapes.

Professor Rich Thomas, the longtime viticulture instructor at Santa Rosa Junior College, did a study of the property and determined the property was a good site to grow grapes.  The next question was what grapes grew best?  The answer was Petite Sirah, a wine that Theodora had never tried before she planted it.

The Yorkville Highlands is known for its rocky hills and high elevation sites with high diurnal temperature ranges and a variety of soils including gravel and old brittle rock.  The appellation consists of approximately 40,000 acres straddling Highway 128 between the Alexander Valley to the southeast and the Anderson Valley to the northwest.

Petite Sirah is an off the beaten path grape (often used to blend) planted in the 1880s in California and not the easiest to sell to consumers.  Botanist François Durif created the grape in France in the 19th century with Peloursin seeds and pollen.  It later was named after him as Durif.

She first sold her grapes to producers like Carlisle and Halcón Vineyards.  But then catastrophe hit in the rainy 2012 harvest when her primary client refused the fruit, claiming it hadn’t reached the contracted ripeness level.  She scrambled. 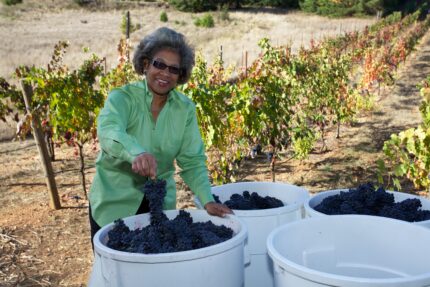 “So here I was with a bunch of grapes and I bartered to get this 2012 wine made.  I made some under my label, some under another winemaker’s label and I sold some grapes,” she said.

She already had a name – Theopolis Vineyards – which was named after her sorority Delta Sigma Theta nickname – and it was time now for a label.  Creative types were inspired by the sight of the silver haired Texan riding a tractor and the nickname ‘Theo-patra, Queen of the Vineyards’ was born.  Her label features a modern day Egyptian looking Theo-patra, but with a few modifications.

“The first label was too perfect,” she said.  “I needed it to look like me – like a real woman, so we needed to make some modifications.” 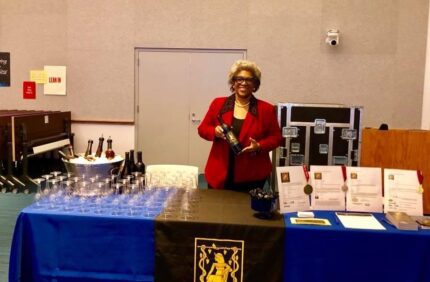 She has no need to separate her two careers — legal and wine.  She lives her complementary lifestyle toting (Pre-COVID) three suitcases on law firm business trips. The first is full of clothes, and the other two are packed with bottles to pour at wine dinners.  She talked about a recent tasting with the North Carolina Bar Association where she got to marry her two passions and how fun that was.

The winery, which has received lots of accolades from the critics, makes Petite Sirah, an Anderson Valley Pinot Noir, a Yorkville Highlands Pinot Noir, a Santa Lucia Pinot Noir and Rosé of Petite Sirah as well as Symphony, a white wine, which is a crossing of Muscat and Grenache Gris. 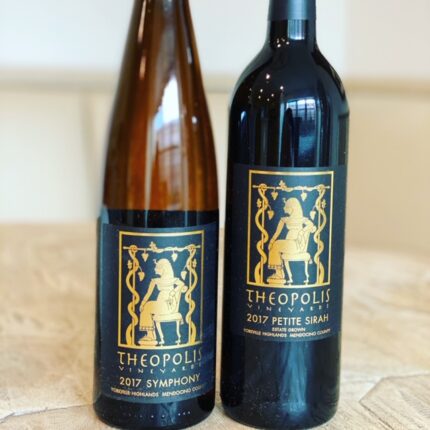 I had the chance to try two of her wines lately during Pink Society, a group bringing together Winemakers and Wine Lovers.

2017 Theopolis Symphony – the grape is a hybrid of Muscat of Alexandria and Grenache Gris developed in 1948 (commercially released in 1982) by the late Harold Olmo, professor of viticulture at the University of California, Davis. This wine was made in 2014 for Theodora’s friend, American Actress, Singer, Model, and Activist Diahann Carroll, who did not drink red wine.

My instructions in advance of the tasting from Theodora was “this wine is going to fool you.  You will want to think that it is sweet – it’s not,” she said.  “Hold your nose and take a sip.  Then see how surprised you are.”  She’s right.

I tasted a mélange of tropical flavors in the glass – peach, mango, honey, melon and a touch of citrus.

2017 Theopolis Vineyards Estate Grown Petite Sirah – I can’t remember what year I tried this, but it remains one I remember … and for a reason. It’s delicious.  It’s savory with notes of chocolate, rosemary, raspberry and black pepper.  As Theodora put it, “this is the wine that references who I am as a human being.”  It’s a perfect descriptor of her — there’s nothing petite about it and its bursting with flavor and personality.

Of course, I couldn’t not ask Theodora about being a black winemaker in today’s world.

“I’m optimistic for the first time.  People have truly acknowledged racism is a problem,” she said. “George Floyd was the catalyst to make people more conscious and see the need for racial justice.  Never before have I had calls to try my wine by people wanting to support black businesses and wineries.  I’m optimistic the momentum will continue.”

She also talked about her commitment to giving back.  “It’s important to give back, lift as you climb and help others,” she said.  “To those much is given, much is expected.  I am dedicated to continue to make the world a better place.”

And she is.  One bottle, one client, one interaction at a time.