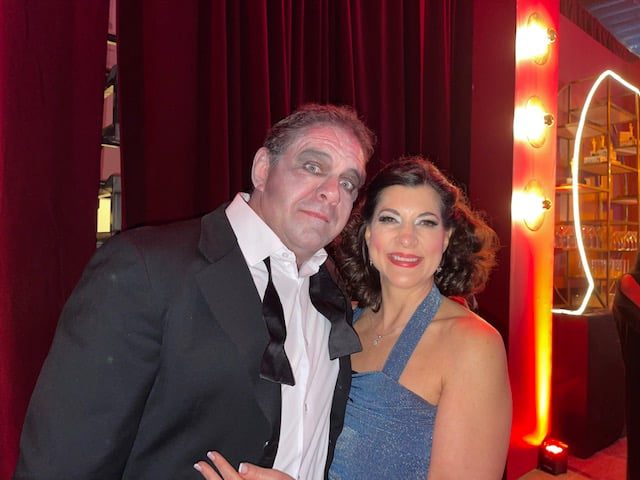 For many years, my holiday of choice was New Year’s Eve. It was the art of getting dressed up, having great food and champagne, going to a special place (we had a particular destination where we knew most of the staff, and things were top notch) and getting out on the dance floor and just having fun. Then I was invited to the Jordan Winery Halloween party in 2019. We’ve been three times and this party beats every New Year’s Eve party I’ve ever attended.  Basically there is no Halloween experience like a Jordan Halloween experience.

Beginning with a creative invite (this year we received a golden Oscar in a box covered with black and white newspaper clippings), you know this party is going to be special Click here just to see the party trailer.. It’s Owner John Jordan’s favorite holiday and the winery gets immersed in celebrating. Each year there is a theme – from Animale in 2019, Alien Invasion in 2021 to Dead Hollywood this year.

It’s a brilliant take on a holiday that used to be about kids (at least for me). The people invited are wine distributors, retailers, sommeliers, and a few media.

As our feet touched the red carpet, we were immediately met by the paparazzi and red wall of roses. As you looked closer at the wall of flowers behind you, you saw hands offering you glasses of champagne.

From there, it was one Tinseltown encounter after another. I was going for an Ava Gartner look and my husband was a dead James Bond. I can tell you this hairdo took curlers, hairspray, and more product than you can imagine (sorry Ozone). It was a sea of Marilyn Monroe’s, Lucille Ball’s, Audrey Hepburn’s, and Prince’s along with the cast of the Wizard of Oz and Golden Girls.

In the barrel rooms of Jordan, we found an ice bar with caviar, lobster rolls, fresh oysters, scallops, beef short ribs, pork tacos, and dessert along with Jordan Winery Chardonnay and Cabernet Sauvignon in magnums. There were several Hollywood cocktails and highlights included Marilyn Monroe and Frank Sinatra impersonators. We also saw an aerialist pouring martinis for party goers while hanging from sheets about 8 feet off the ground. The night ended with a DJ, who got us all dancing with a great playlist.

The next day we joined John at his airport hangar for what used to be known as the hangover brunch. We were greeted by more wine, an open bar, a mimosa bar and a bloody mary bar along with a buffet of great Mexican food.

I’ve also noticed a trend with the party – Mother Nature certainly doesn’t want it to end. We landed in 2019 to the tornados that ripped apart parts of Dallas. In 2021, the bomb cyclone hit Sonoma and washed-out roads and this year, there was weather in Dallas that caused us to be diverted to Abilene and land around 2 am on Tuesday.

I get it. I wasn’t ready for it to end either. As a result, I’m now a Halloween favorite holiday kind of girl if it’s done in the style of John Jordan’s favorite holiday.