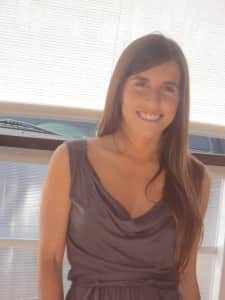 Last month I attended a lunch at Komali to introduce Santa Julia wines from Argentina to the Dallas market.  Julia Zuccardi, the namesake of Santa Julia and a third-generation family member of one of Argentina’s family-owned wineries, was our gracious host.  In her words, and said with a smile, “my father named the winery after me because he thinks I am a saint.”

Ana Rodriguez Armisen of Santa Julia’s Casa del Visitante jointly planned the menu with Abraham Salum of Komali and it was focused on Argentinean cuisine.  I felt like I needed expando pants by the time I finished the three appetizers followed by a four course menu paired with seven wines.  I had taken the afternoon off as we had what is known as a very leisurely European lunch and a few of us were checking our watches after two and a half hours due to other commitments as much as we would have loved to stay.

Santa Julia wines are all about sustainability and focused on four pillars — people, vineyard, energy conservation/reclamation and environment.  The wines are bottled in lighter weight glass to lower carbon emissions and organic wines comprise of 30 percent of the vineyard.  The Mendoza-based vineyards grow estate-planted grapes and the wines retail for under $13. 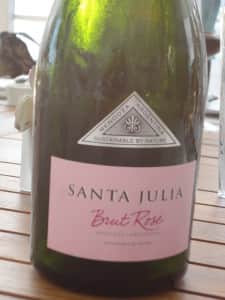 We started with passed hors d-oeuvres — sopes de tinga de pollo con queso fresco, slices of grilled beef over home-made countryside bread and chimichurrie sauce, which was later demonstrated by Armisen; and grapes and raisin bread with goat ricotta cheese dressing of frantoio olive oil from the estate, black olives and fresh arugula.  The wines included the Santa Julia 10 Organico Cabernet Sauvignon with lots of cherry and spice; the 09 Organico Malbec with mocha, chocolate, deep berry and vanilla; as well as the Santa Julia Brut Rose NV with red fruits, floral essence and a creamy texture.  I was really impressed with the sparkling especially at a price point of $10. 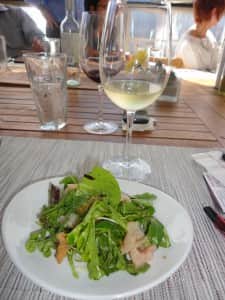 Already full, we moved to our first course — a fresh green salad with mustard shoots, carob’s bread croutons, grapefruit and cured trout with a grapefruit juice and manzanilla olive oil dressing paired with 10 Santa Julia Torrontes.  What a fabulous pairing – the grapefruit, peach and minerality worked exceptionally well with the salad. This is a great wine for $10. 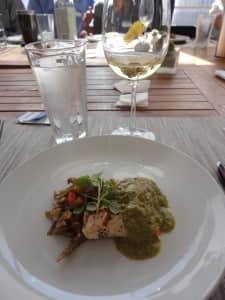 Our second course paired with a roasted snapper filet, pumpkin seed pipian and nopal salad was matched with the 10 Santa Julia Organica Chardonnay.  The pairing worked, but this was my least favorite wine tried, but still a solid chardonnay option for $11. 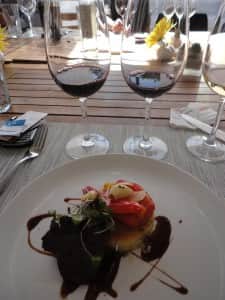 The third course was grilled lamb with crispy smashed potatoes with frantoio olive oil, Malbec reduction and warming salsa criolla paired with two 09 reserve wines. The first is the Santa Julia Reserva Malbec with fig, chocolate, terrior and mocha.  This was a more balanced and deep wine than the first Malbec tried.  The second wine was the Santa Julia Reserva Cabernet with black cherry, currant, leather and blackberry.

The grand finale, and it was fabulous, was a capirotada-Mexican bread pudding with piloncillo syrup, Mexican raisins, fresh mango and queso Cotija matched with an 09 Santa Julia Tardio, la ate harvest Torrontes.  The bread pudding was almost cobbler like and one of the best desserts I’ve had in a long time.  Matched with the Tardio, the dried orange peel, apricot, honeysuckle and almond present in the wine was one of the most sublime combinations I’ve ever tried.