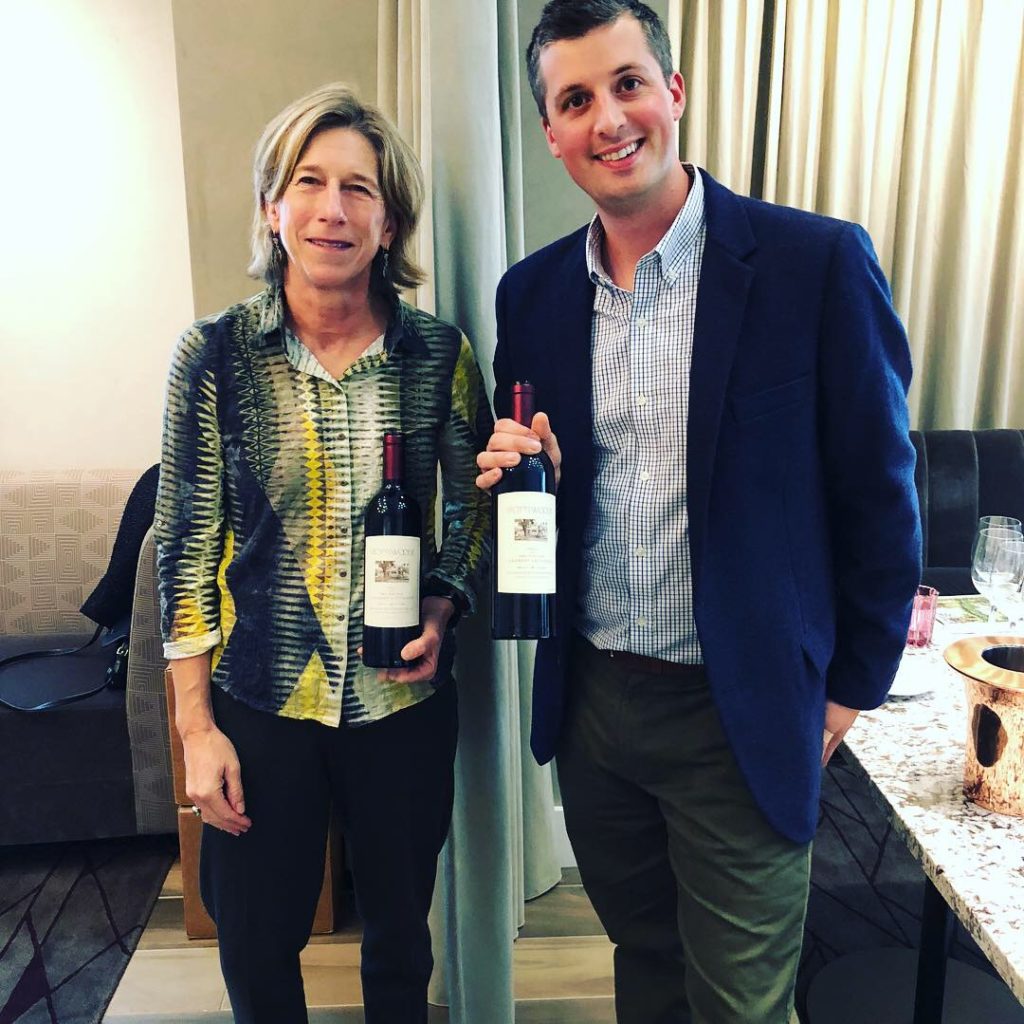 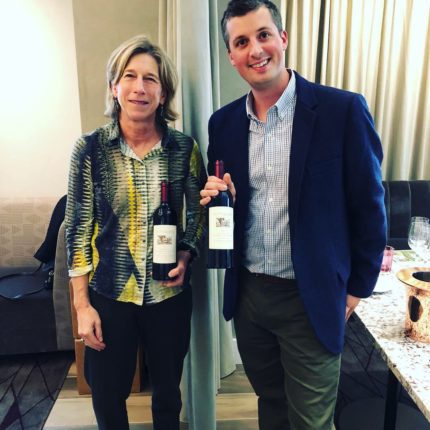 Spottswoode’s CEO, Beth Novak Milliken, told us about the family history and gave us a glimpse into how the Novak family began their business knowing nothing about growing grapes and evolved to where they are today making world-class wines.

Spottswoode Estate Vineyard & Winery is known as one of Napa Valley’s extraordinary vineyards that is grown and farmed by generations of family members who have the same authenticity, character and grace of the matriarch who found herself having to keep the winery going after the sudden death of her husband with five children to raise.  Recently, daughters Beth Novak Milliken and Lindy Novak hosted a seminar at the Mirador in Dallas of ten vintages of Spottswoode’s Estate Cabernet Sauvignon from the 80s to the 2000s, made by five winemakers including all of the Cabernets made by current Winemaker and Vineyard Manager Aron Weinkauf. 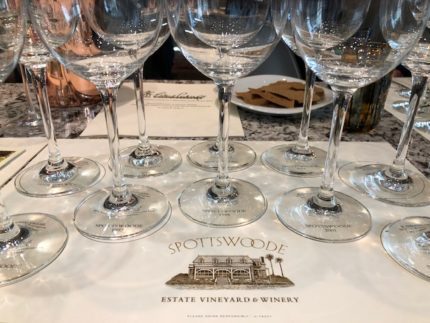 Spottswoode is a story of family, dedication and perseverance as well as a women success story.  Mary Novak, and her daughters, Beth and Lindy, pioneered organic viticulture in Napa Valley and championed the role of women in the wine industry.

First, a little history.  In 1882, the first wine grapes were planted by George Schonewald on the site of today’s Spottswoode Estate Vineyard.  Over the next few years, George built a home based on the famed Hotel del Monte in Monterey, California, and in 1910, the vineyard and its buildings were named Spottswoode.  When Prohibition happened, selling sacramental wine, frog legs and mushrooms was the way the winery survived.

In 1972, Mary and Jack Novak moved from San Diego to St. Helena, looking for a rural area to raise five young kids and found the 31-acre Spottswoode property.  They had a vision of growing wine on the property, had solid advice from their winemaker neighbor Rick Forman, acquired an additional 15 acres adjoining the property and began replanting the vineyards with Cabernet Sauvignon and Sauvignon Blanc.  They started as grape growers and sold to Robert Mondavi, Frog’s Leap and Caymus.

In 1977, Jack died suddenly of a heart attack leaving Mary with the property and five kids.  She decided to pursue their vision and continued to sell grapes to a supportive Napa community including Duckhorn, Shafer and Heitz and they encouraged her to make wine.  In 1982 – 100 years after the original planting of Spottswoode — she made her first vintage and Winemaker Tony Soter came onboard. 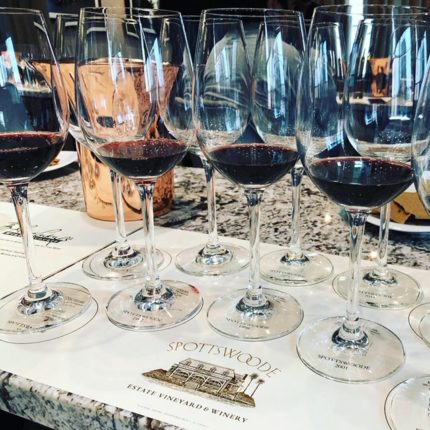 “Tony wasn’t just a winemaker,” as said Mary on Spottswoode’s website.  “He was a philosopher, who thought deeply about everything, asked questions and embraced new ideas.  Tony was instrumental in helping to establish the elegant, complex style of our wines. He also set the precedent for how involved our winemakers have always been in the vineyard, which wasn’t the norm of the day.”  In addition to making the wines, Tony soon took over management of the Spottswoode Estate Vineyard, and in 1985, he and Mary introduced organic farming to the estate—an uncharted idea at the time.

Two years later, Mary and Tony were joined in their efforts by Mary’s youngest daughter, Beth, who dedicated herself to stewarding the family business.  Beth’s first major decision was to acquire the historic Kraft property adjacent to Spottswoode, which included a pre-Prohibition Victorian home that was turned into the Spottswoode offices, and a stone winery that became the Spottswoode barrel room.  When phylloxera hit the valley, Beth also oversaw the replanting of the Spottswoode Estate Vineyard in stages.  While Mary died in 2016, it is clear that her legacy is very much alive.

There have been several notable winemakers for Spottswoode – well-known women like Pat Starr, Rosemary Cakebread and Jennifer Williams.  Today, Aron Weinkauf is the Vineyard Manager and Winemaker is in charge of carrying on the rich tradition of embracing an interconnected view of winemaking. 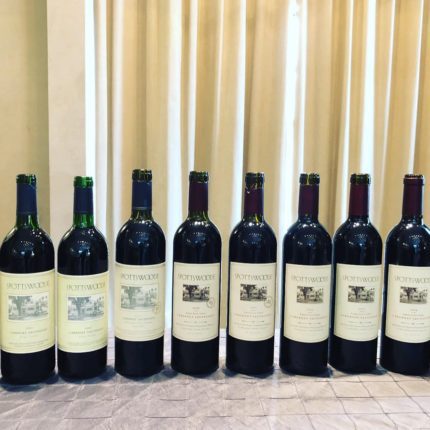 So how cool would it be to try a bunch of wines made in essentially the same style with different winemakers through the generations …. Well, we had the opportunity to find out.

2017 Spottswoode Sauvignon Blanc: this is a lovely wine with notes of lime, citrus, stone fruit, vanilla, minerality, and herbal notes. 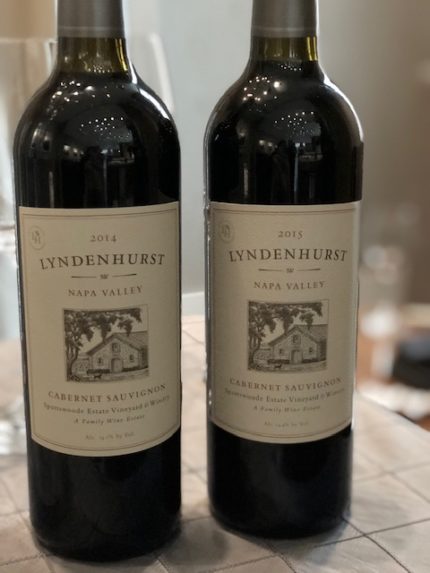 2015 Spottswoode Lyndenhurst Cabernet Sauvignon – this wine was earthier than the 2014.  I tasted black and red fruit, earthiness, cedar, spice and eucalyptus. 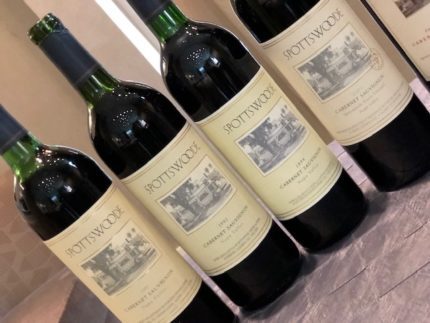 1998 Spottswoode Estate Cabernet Sauvignon – I tasted notes of earth, tobacco, black fruit, rosemary and green olive.  The wine was a blend of 95 percent of Cabernet Sauvignon and 6 percent Cabernet Franc and it was aged 20 months in 100 French Oak.  It was made by Winemaker Rosemary Cakebread. 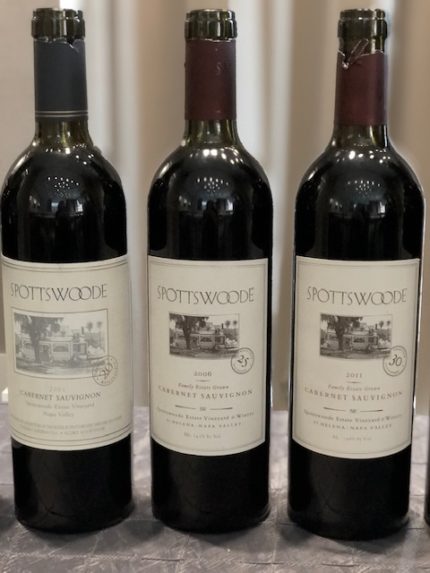 Then we shifted to a vertical of wines all made by current Winemaker and Vineyard Manager Weinkauf.  His oak profile of aging for 20 months in 100 percent French Oak did not change, but his blends varied. 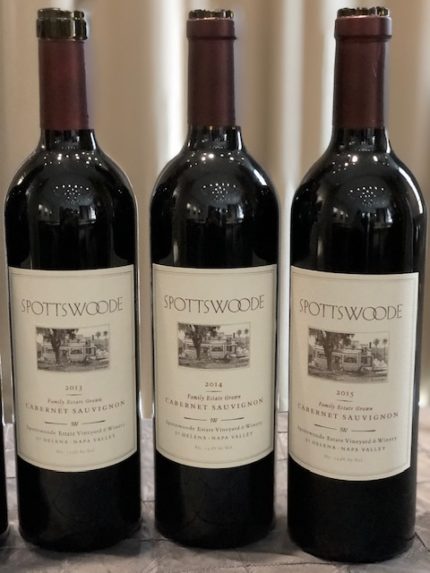 2014 Spottswoode Estate Cabernet Sauvignon – this was excellent.  The wine had notes of dried herbs, chocolate, red and black fruit, cocoa, rose petals, leather and coffee.  It was a blend of 86 percent Cabernet Sauvignon.

It was such an honor to be a part of history with a family who has shown so much pride and perseverance.  As Beth wrote in her handout to us, “At the highest level, wine is somehow ethereal.  A well-crafted wine possesses a truly timeless quality.  In a very real sense, its life stages mirror our own – wines can live as fully as we do.  As someone lucky enough to have grown up in a vineyard, I celebrate this parallel connection between wine and people.”