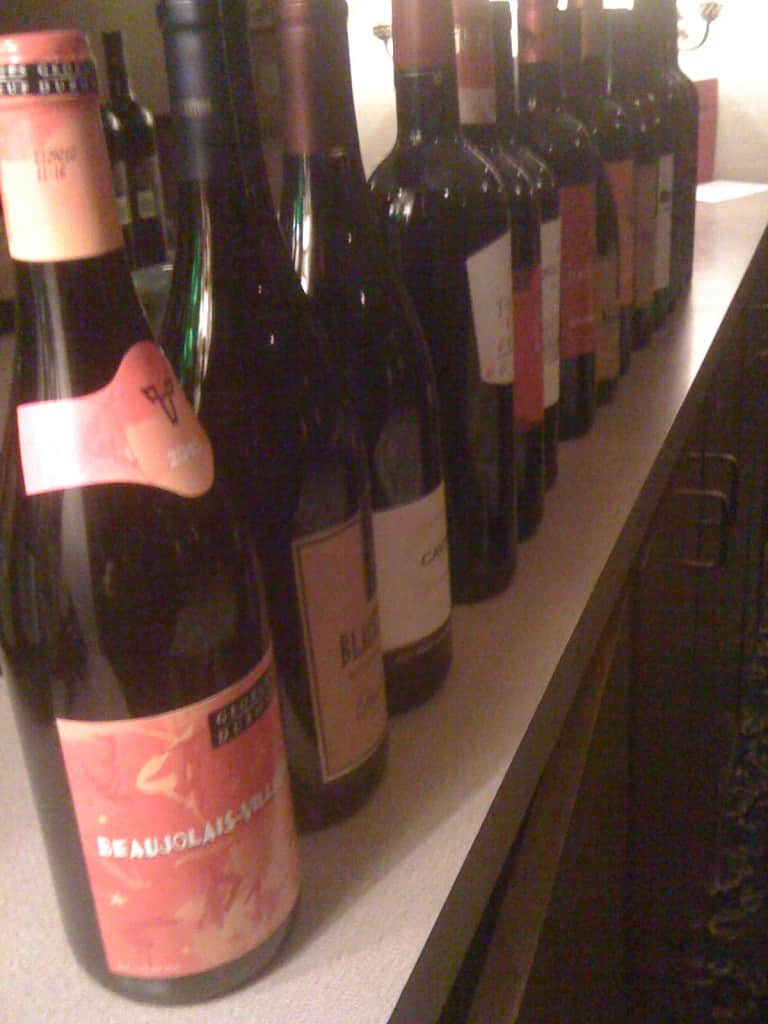 I know you’ve heard the old saying, “Be careful what you wish for….”  About a month ago, I was lamenting the fact that review wines were stacking up in my kitchen and I posted on Facebook that I needed some tasting assistance.  Naturally, several people immediately jumped to help and the next thing I knew, Lea Cromer had arranged for our tasting to be held at Saint-Emilion Restaurant.com in Ft. Worth, TX for a nominal fee.

First, I had to figure out how to get a bunch of folks from Dallas to Fort Worth without having to drive.  We were planning to drink 16 review wines and we were ready for some fun.  Sure, we could have paid for a driver, but since it was the midst of the holidays we didn’t want to spend the funds.  In most metropolitan cities, this would not be that big of a deal, but in Texas, public transportation is not an easy feat.

We found out the Trinity Railway Express would get us from point A to point B in less than an hour.  Seemed easy.  Notsomuch.  My friend, Julie, and I took a taxi from my house to the station and found it difficult to navigate with someone else driving.  Actually, that’s an understatement.  Do you remember the scene from National Lampoon’s European Vacation?  We had our Look kids.  There’s Big Ben.  There’s Parliament moments.  The real irony occurred when several of my friends tried to (gasp) drive their cars to the station and park.  That’s when we found out that the ample lot located next to the station is closed and they wanted three women driving separately to park 15 minutes away and walk… because that is safe and makes sense?

I must admit.  Once we got on the train we planned to clandestinely pour some wines into coffee cups to toast the journey.  The train was so packed that was not a reality, but I know some of the conversations that we had definitely were not what the daily commuters were used to overhearing.  Once we hit Fort Worth, we piled (and I mean piled) into the taxi where we were finally en route to Saint-Emilion Restaurant, one of Fort Worth’s treasures.

In the past, I haven’t spent a great deal of time in Fort Worth outside of client business or the arts community, but I can’t put into words how lovely and hospitable the owner, Bernard Tronche, was to us. He truly rolled out the red carpet. 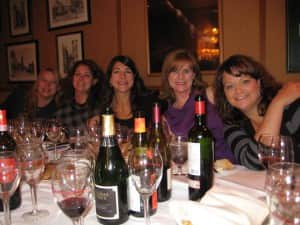 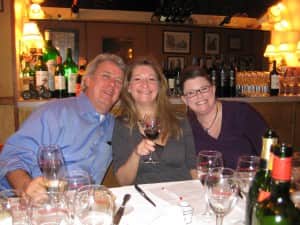 Bernard had arranged for the tasting wines to be properly chilled and stemware was waiting when we arrived.  Our aperitif was the Biltmore Estate Blanc de Blancs Methode Champenoise.  Made of chardonnay grapes, it was floral, had a touch of honey and some citrus notes.  A very nice sparkling for $24.99. 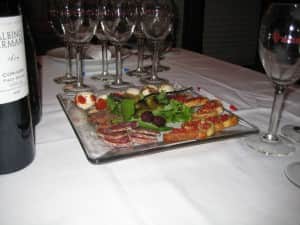 Once we had finished our sparkling, Bernard began to bring out lovely plates of cheeses, frog legs, escargots and freshly baked warm bread to complement the food.   There were arsenal meats, goat cheese rolled in spices, almonds, olives and an amazing bruschetta appetizer that I couldn’t stop eating.

My favorites of the 16 wines that we reviewed: 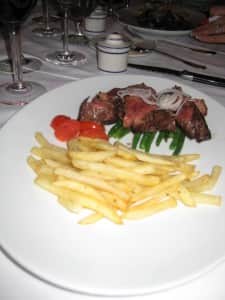 Right as the Dona Paula Malbec was poured, Bernard and crew came with the grand finale – a fantastic steak, pommes frites and grilled asparagus.  The meal was absolutely heavenly and I don’t think I left a bite.  Saint-Emilion opened in 1985 when Bernard, a transplant from France, decided that he wanted to open his own restaurant after working at restaurants in New York, New Orleans and Dallas.  Mark Hitri serves as the Chef de Cuisine and joined last September. 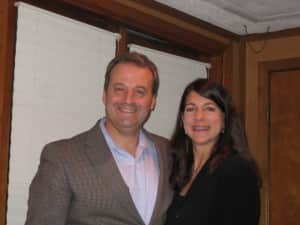 Bernard and I enjoying the evening

We wrapped up the night with a few wines from our own collections.  The Summers Adrianna’s Cuvee Cabernet Sauvignon Napa 07, the 00 Chateau Margaux Pavillon Rouge and the 05 Marquis Phillips S2.  This time we planned ahead and filled out “to go” cups before arriving at the station for the long ride ahead. 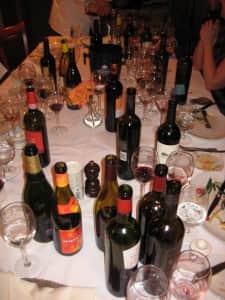 I can tell you one thing – the food at Saint-Emilion is worth the trip.  I will be back – and might even take the train again to do so …