It’s always tough to distill all the information from the Wine Bloggers Conference.  The pre-trip, the conference and the post-trip all provide experiences that are so unique it is hard to bring them to life.  This being my third year of attending the Wine Bloggers Conference, with my first opportunity to serve as a judge of Best Wine Blog and Best New Wine Blog, I finally felt like I had the lay of the land.  Being a judge was a humbling experience, and I’m thrilled to see so many great wine blogs out there and hope you are expanding your horizons by reading some of the nominees.  They are well worth your while. 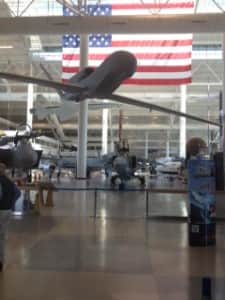 I started my journey on the Wine Bloggers Conference pre-tour, “Salem – Outside the Bottle”, where I was met by Irene Bernards, a woman who is the director of marketing for the region and loves her job.  I knew very little about Salem, Marion County and Polk County.  Salem is Oregon’s State Capital and is located in the Willamette Valley, which has more than 200 wineries.  Our first stop was the Evergreen Aviation Museum where we tried a few wines and saw some of the most iconic aviation and space museums including the Spruce Goose, which was the largest airplane ever constructed and flown only once by Howard Hughes.The plane was born of a need to move troops and materials across the Atlantic Ocean when German submarines were sinking Allied ships. 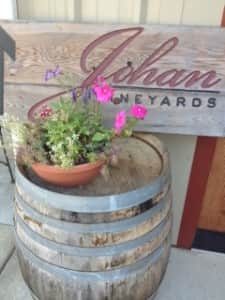 Our next stop was a short hike as it was 100 plus degrees, which appears to be the curse of the Wine Bloggers Conference, from Johan Vineyards to Left Coast Cellars.

Johan Vineyards is a small family vineyard with 85 acres dedicated to estate vineyards adjacent to the Van Duzer corridor.  This family claimed heritage from the days the Vikings sailed to Iceland, Greenland and Newfoundland.  Dag Johan Sunby, a native Norwegian, came to North America in 2004, seeking a new life with a dedication to finding the ideal terrior similar to Burgundy and making great Pinot Noirs.  We had the opportunity to taste several bottles and barrels including a mini-vertical of 09-11 Pinot Gris wines that were so different and showed the power of the terrior combined with great winemaking skills.  I also enjoyed the 07 Pinot Noir.  Some hiked, some did not. 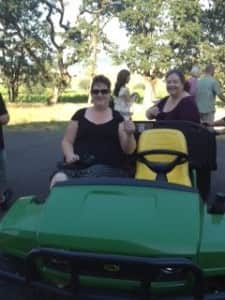 Those of us who did hike, had the chance to see the gorgeous vineyards and sample the Boedeker Pinot Athena 08 and the Et Fille 08 Pinots, made by a very talented husband and wife team with a different sense of style for each wine.  I personally enjoyed both of them. 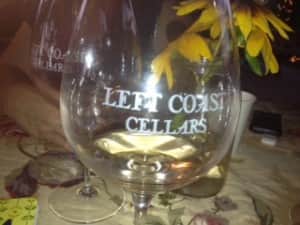 Then we had the chance to spend some time at Left Coast Cellars, one of our co-hosts for the event, with the lovely and fun Ivy Hover, marketing director, tech guru and hospitality expert extraordinaire. Left Coast Cellars is situated on the 45th parallel (important for the world of Pinot) and consists of 306 acres.   It’s somewhat of a nature preserve and I saw lots of evidence of wildlife including a spectacular heron.  I had the chance to try the estate-grown Pinot Noir, White Pinot Noir (yes, it’s fabulous), Pinot Gris and Syrah, which were all really great wines.  They also made us a great dinner to match their wine line-up including a white pinot noir, which was a fun and tasty discovery.

That night we were split into several hotels and I was lucky enough to stay at the Grand Hotel in Salem, which was a lovely place that I’d visit again when I have more time. 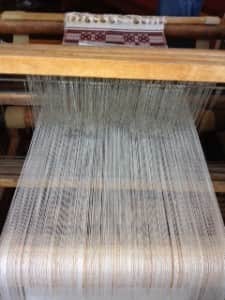 We had a tour the next day at the Willamette Heritage Tour, where we were transported back to what was once a leading textile factory in Oregon.  We also got to preview the “History of Tap” exhibit where we learned about the free lunch, a marketing program encouraging workers to enjoy a free lunch with the purchase of a pail of beer. 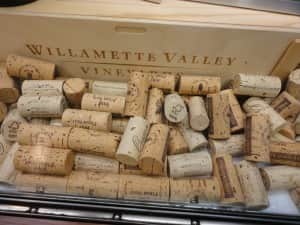 We then reached Willamette Valley Vineyards, one of my favorite stops of the tour.  I had the opportunity to meet Don Crank randomly at the Whole Foods in Dallas and immediately picked up one of his elegant estate Pinot Noirs to take home.  Willamette Valley Vineyards was purchased in 1983 by founder, Jim Bernau, who planted Pinot Noir, Chardonnay and Pinot Gris.  By 2011, the winery was named as one of the greatest Pinot Noir Producers by Wine Enthusiast Magazine.   The name of the game is to allow the terrior to express character and the wines are expressive of the varietal and place where they are grown. 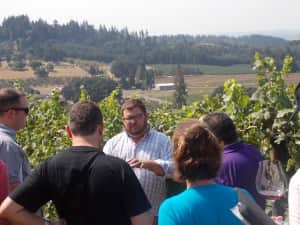 We tried several 09 Pinot Noirs – the basic Willamette Valley Vineyards Pinot (rated highly at 92 points in 08 by Wine & Spirits) as well as single vineyards from Tualatin Estate, Eola-Amity Hills and Bernau Block.  We also tried the 2011 out of the barrel from Tualatin Estate, which showed a ton of promise.  I also want to mention the 2010 Pinot Gris, which was full of pear, apple and lemongrass.  I also really enjoyed the 2011 Pinot Blanc Founder’s Reserve.  I left to buy wine, so I missed trying the sparkling muscat, but heard good feedback from the group. 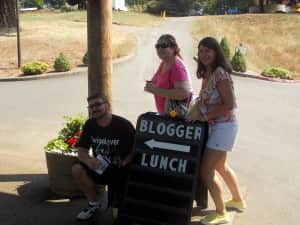 Big shout out to Eric Nelson, the chef for Willamette, for one of the best meals that I had while in Oregon.  Absolutely fabulous foods that couldn’t have matched better with the wines.  Note that gruner veltliner appears to be an experimental grape that I would absolutely support based on my tastings. 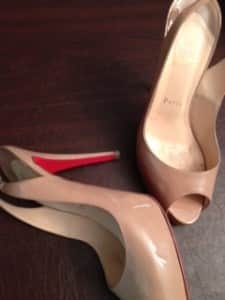 At this point, I’d really like to do a public service announcement of what is appropriate for wine country.  Yes, I have lovely designer heels that make my legs look longer and make me feel very tall.  However, I go to wine country for the experience of going to wine country.  It’s not a fashion show or about wearing designer for designer’s sake.  Dress appropriately, people. 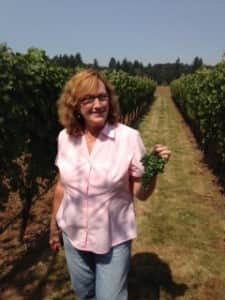 Our next stop was Piluso Vineyard for a vineyard walk and tasting.  Sandee Piluso decided that when she was ten, she decided that she would make wine after sneaking out to a friend’s vineyard while spending the night.  However, she became convinced there was no future for women and winemaking.  Eight years later she decided  to go for it.  In 1999, she went through the new UC Davis program in Temecula and received her viniculture degree in 03 and enology degree in 04.   She was the first person   to graduate and hit the ground running with her husband.  I loved her trial vineyard program, which included 4 acres of Muller Thurgau, Viognier, Marechal Foch, Dolcetto, Gamay Noir, Tempranillo and Pinot Noir.   We tried a number of wines including her 2010 Pinot Noir, 2010 Blanc de Noir, 2010 Fiore Bianco, several Pinot Noirs, but her 2010 Estate Gruner Veltliner was the stand-out and a differentiation from what we had been drinking. 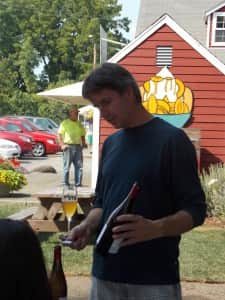 And, let’s talk about our final stop at E.Z. Orchards, a farmers market for about 10-15 growers featuring Oregon farm grown fruit, vegetables and nuts, where we had a tasting of their branded hard cidre made from 10 varieties of bittersweet French apples that was incredibly refreshing.  This was served with some of the best fruit shortcake (my choice was peaches, mixed berries and lowfat ice cream).  I cannot do any justice to this dessert and how this was so worth the trip and calories.

This was an amazing experience, but I have to say that it was just the beginning of a total love affair with the state of Oregon.