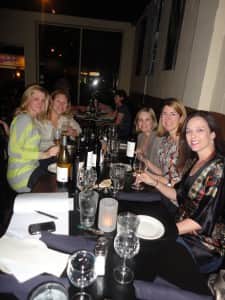 In 2008, I began the journey of Greenhill School with my only daughter in Pre-K. Greenhill has a fabulous reputation as one of Dallas’ top private schools with an impressive list of some of our city’s most illustrious names in attendance. And then there was my husband and myself – definitely not at the top of the aforementioned list. So, I was a little nervous about meeting some of the parents in her class and wondered if we’d be the square peg in the round hole. Once I was there, I found a group of moms who were pretty much as new to this whole oldest child in a new school thing as I was. So, we navigated it together and became quick friends in the process.

Fast forward to 2012, and we are all still good friends as are our children. The group is diverse – a few stay at home moms, a partner at a law firm, one in marketing at Southwest Airlines to a pediatrician at one of Dallas’ top practices – we like wine and we have a blast.

I’ve been saying that I’d set up a wine tasting event for … about three years … and I finally made that happen at Kozy’s, my usual casual BYOB mixed with good food venue. I brought six wines that I’d been sent to review from Napa Cellars and Ravenswood. It was a mix of only white and only red drinkers, but overall everyone agreed to give everything a shot.

The only white wine of the night, 10 Napa Cellars Chardonnay, got good reviews from the group. It had lemon, apricot and a nice balance. It was described as “being lighter in nature” as and “more mellow than a typical chardonnay.”

The other two winners from Napa were the 08 Cabernet, which was one of the evening favorites for its blackberry, tobacco and mocha notes as well as its balance. The 09 Merlot was also described as “the non-Merlot drinkers Merlot.” Of the two, I preferred the Cabernet.

2 thoughts on “Pre-K, Finding Our Way and Wine”