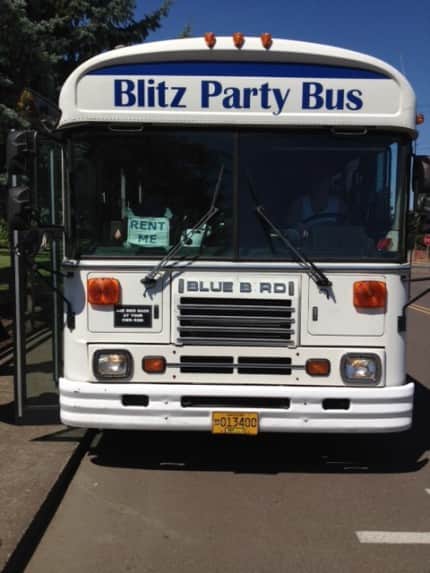 And then it was over.  Just like that.  But thankfully my post trip was about to begin.  The town of Carlton, where I had spent the #cuffedincarlton wine tour trip, was willing to have a group of us back for a two-day excursion with some of my most favorite wine bloggers.  We were picked up by the rocking party bus from the Doubletree with Motown music, couches and comfy seating where we were transported to Carlton’s “Walk in the Park” event featuring more than 30 Oregon wineries.  The event brought together some of Yamhill County’s best wineries and gave me the opportunity to spend some extra quality time with some of the people behind my favorite wines. 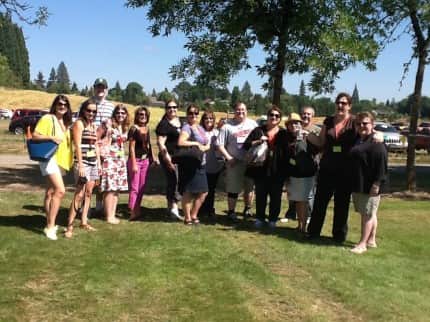 A special shout out to Ken  Morrison from K&M, who was such an avid student on how to Tweet and was kind enough to continue the crazy chicken legacy.  BTW, he and his partner, Mauro Hernandez, make some pretty rocking Pinots that I can’t wait to receive once the weather breaks in Texas and my shipment arrives. 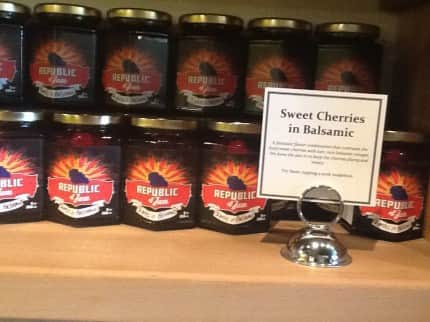 Lynn and Amy generously hosted us at Republic of Jam for cocktails and fabulous appetizers.  It was so fun to see the store that has become such a destination point and their vision brought to life.   I loved the craft cocktails made with so many of their products; they were just delicious.

We had dinner at the Horse Radish, well those did that didn’t have a pork allergy (Carlton definitely loves its pork products), but they gave me a really nice salad and I was able to sneak across the street for a great turkey sandwich that I snuck into the hotel James Bond style.  I was able to share a bottle of Retour, one of my favorite Pinot Noirs who is owned by a dear friend of mine.

The next morning, we had a private tour with Ken Wright, who in my mind is one of the “father’s” of Oregon Pinot.  Because there have been really great discussions on other blogs by attendees of WBC12 about Oregon terrior,  I have no need to recreate my version, so I’ll just talk more about Ken’s point of view from that day.  He talked about the wines doing so well because all of the conditions are right for Pinot Noir and the depth and how where the grapes are planted matter.  He called others to task who are growing Pinot grapes on the floor of the valley making poor wines and hurting the Oregon wine industry.  Ken has earned the right to have an opinion.

He talked about how nutrition is key to making great wine and the plant is the ultimate report card.  Ken told a great story about seeking out a farmer in Washington State who was responsible for growing a specific apple for the Japanese market who had 15-acres dedicated to doing only that.  Ken and his team visited the farmer who at the beginning of their discussion peeled one of his apples and took them on a tour of the vineyard.  When they returned, the apple had not aged a bit and was “freaking unbelievable.”  This further solidified that each plant must be allowed to take its fruit to the ultimate stage.  Microbiology and protecting the fruit is so important – not only for wine, but for the fruits and vegetables that we eat daily.

We tried two of his wines – the Ken Wright Cellars Abbott Claim, Yamhill-Carlton AVA, which was lush with stone fruit, cassis and spice.  Our next wine was the Ken Wright Cellars Carter, Eola-Amity AVA, which was much more mellow in nature with blueberry, cherry and plum.  Totally different vineyard, totally different terrior and elevation.  Cool experiment! 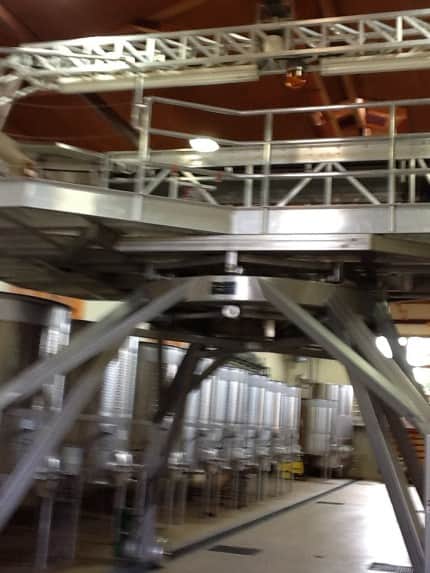 Our next stop was Lemelson Vineyards, a 160 acre, carbon-neutral facility, focused on producing certified organic wines.  The winery owns seven estate vineyard sites located in Yamhill-Carlton, Dundee Hills and Chehalem Mountain.  We started with a glass of 2011 Dry Riesling, which was full of tropical notes and was very enjoyable.  We then toured “the Starship Enterprise,” the winery’s gravity flow facility designed by Steve Cornish, who also designed Palmaz Vineyards (link).  After we climbed up the ladder of this high tech wonder with our glass of 2010 Tikka’s Run Pinot Gris, I didn’t time my ladder climb with the person ascending before me and ended up covered with Pinot Gris and a broken glass.  Lesson learned – make sure you get your timing right if climbing a ladder with a glass of wine in hand. 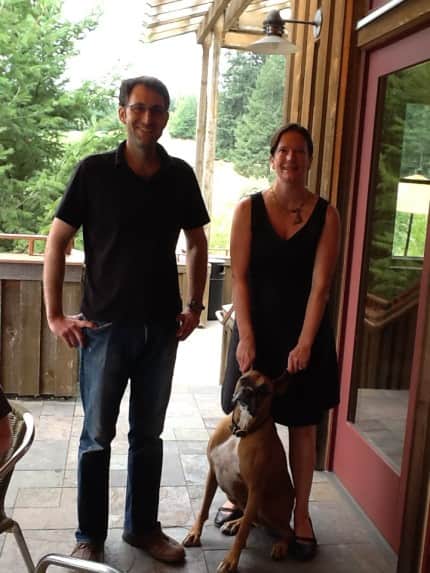 Anthony King, the wine maker and his wife Kara, talked about the collegial community of winemakers in the region.  We then tasted some of the same wines aged in different coopers – such a cool experience and it becomes easy to see why a winemaker pays $1,100 for a high-end barrel – aromas, flavors, smells are all different.  We adjourned to the porch and had the opportunity to taste several wines (most of which I ended up ordering – you will find that was a common theme of this day).

Our next stop was lunch at Cuvee, several tart flambées prepared by Chef Gilbert Henry, which happily did not contain all pork products.  The veggie and salmon ones made me very happy.  Belle Pente, Alexana and Carlo and Julia joined us for lunch and talked briefly about the wines that were paired with the lunch. 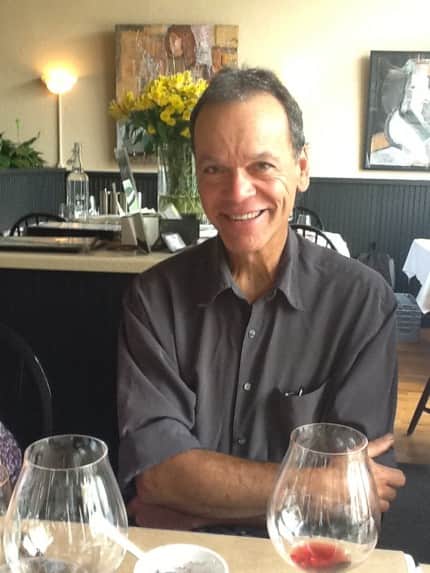 I sat across from Felix Madrid, the owner and winemaker of Carlo and Julia, who talked about naming the winery after his twin sons (now 23!).  At five, his child smelled one of the wines and remarked, “dad, this smells like perfume.”  A child after my own heart and probably a pillar in the family business. 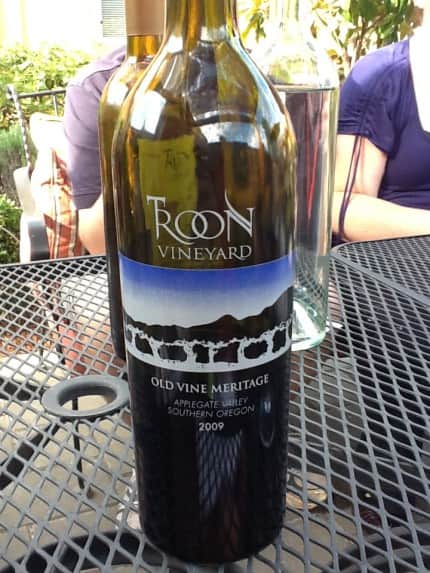 Then we did a speed dating of sorts with a number of wineries.  I don’t think that Carlton understood how much we liked their wines and we slowed down the schedule when we insisted on buying at every stop.  We visited Carlton Cellars, Valley Emporium, Noble Pig (loved the food/wine pairings), Terra Vina, Mouvance and Troon (super interesting and non-traditional wines like meritage, zinfandel and port).  I would have loved another hour at each place. 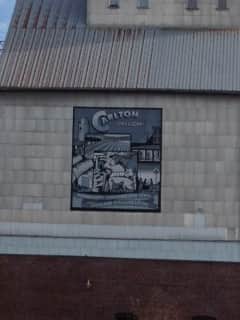 Thank you again to the City of Carlton, “the wine capital of Oregon” for rolling out the red carpet and making this group of bloggers feel special.  Your town has so much to offer and I can say with certainty that I will be returning as soon as possible.