Operation Masthead: Four Bloggers Quest to Secretly Make A Wine (and Wait to Tell the Tale) 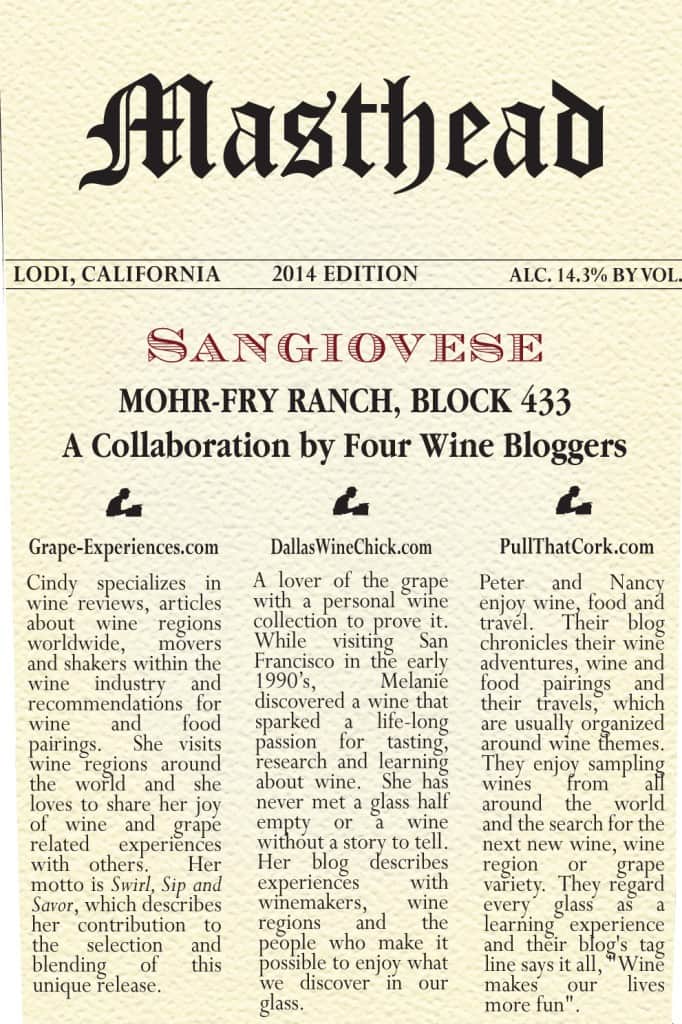 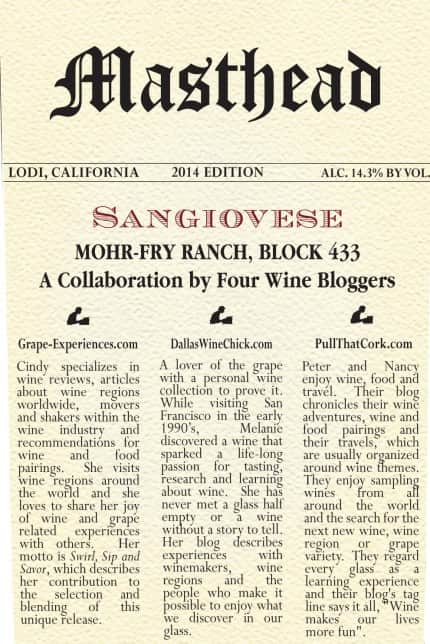 Call me Bond … James Bond.  Well that might be an overshoot, but it started out as an amazing clandestine story – Operation Masthead. 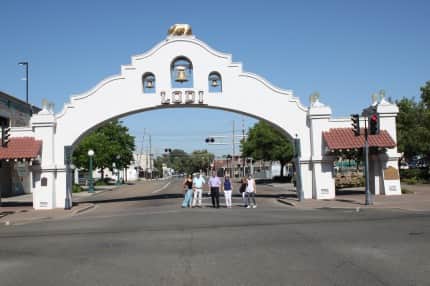 “I have something amazingly cool that I am working on and you are going to be a part of it, but it is very secretive…,” said Bradley Gray in the scope of his representation of Scotto Cellars.  Granted, this was about ten months ago and while I was intrigued, life happened and no further information was shared.  Fast forward almost nine months and he called me back with the opportunity of a lifetime.  “How do you feel about making a wine from Lodi with Famed Winemakers Mitch Cosentino and Paul Scotto and some really cool well-known bloggers,” he said.  “You’ll do the blending, help with the marketing and then you’ll debut it at the Lodi Wine Bloggers Conference.”  Um, yeah.  You had me at hello… 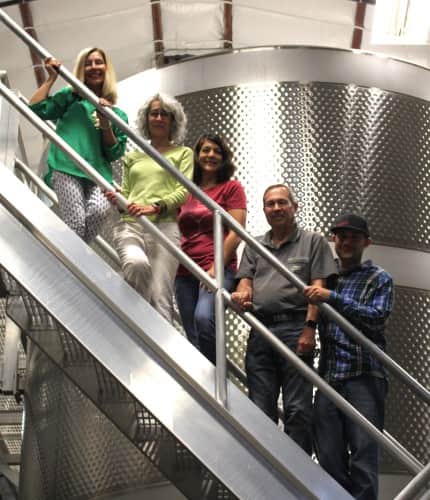 It turns out that four bloggers – Nancy Brazil and Peter Bourget from www.pullthatcork.com and Cindy Rynning of www.Grape-Experiences.com  received the same invitation and I’m sure had the same “I will make this happen come hell or high water” reaction that I did.   Cindy and I were picked up at the airport by Bradley and Scotto’s head of marketing, Robert Walker, and we drove out to Lodi to meet Peter and Nancy for our tour of the under construction Scotto Cellars tasting room. 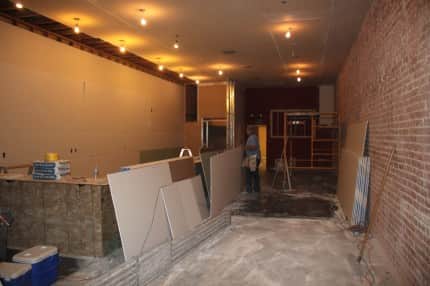 After making wines for five generations, the Scotto’s are opening their first tasting room on South School Street in downtown Lodi.  The tasting room will feature wines as well as craft ciders including one made with Pinot Grigio made by Paul Scotto, Winemaker and Cider Master.  This is going to be a really cool spot complete with food, wine, a future Speak Easy and just a cool place for folks in Lodi to hang out.

And food, wine and family is part of the Scotto heritage.  Wine was an addition to the weekly Sunday gatherings and has been part of the family’s routine for many generations.

Salvatore Dominic Scotto started a winery in Ischia, Italy in 1883.  In 1903, the family emigrated from Italy and settled in Brooklyn, NY.  They opened Scotto Liquors, one of the oldest liquor stores in the state of New York, which has since been sold, but is still in business.  The Scotto’s made wine in their home from whatever fruit they could source in Brooklyn and similar to the Gallo family, sold it door to door out of crocks from a horse drawn wagon.  In 1961, they bought a facility in Pleasanton, California, that they named Villa Armando, where they began making their own wine.  They created Villa Armando Rustico, one of the oldest US wine brands. 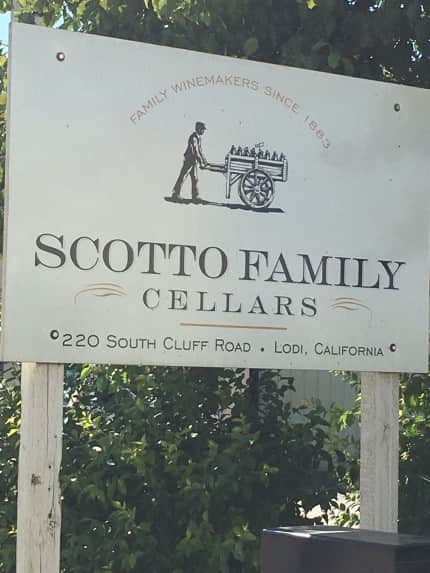 In 1963, Anthony Sr. moved from Brooklyn to Livermore Valley in California to continue making wine.  They added wineries in Napa and Lodi to continue the Scotto expansion – making them the 30th biggest winery in California.  In the 1980s, they expanded the Scotto portfolio into Lodi and Napa.  Five generations later, they have expanded the scope of their wines to include more than 40 brands sold to 180 customers around the world. 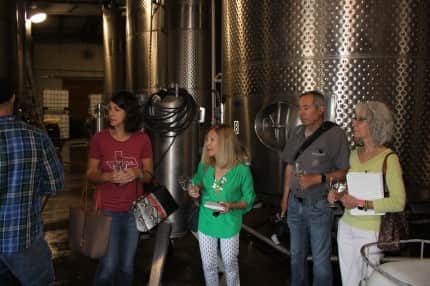 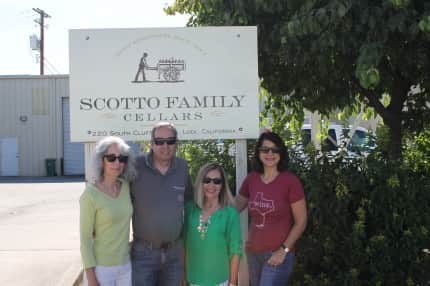 We toured the Lodi operation including the cider operation and were amazed by the technology and supply chain (I am a former supply chain marketing geek).  From the mobile bottling unit that can do 110 bottles a minute to the efficiencies of producing 350,000 cases of wines under different brands (some named specifically for geographies), it was clear that this was a well-run machine.  And you can tell that this family does this because they love it – wine is in their blood and they want to share their family traditions with employees, distributors and wine drinkers.  We got to meet Anthony Jr and spend significant time with Paul and Natalie Scotto Woods and found them all to be unassuming, passionate and clearly happy to come to work and do what they love every day.

It was unusual for a group of storytellers to not be able to tell a story.  We are all about the story, wines, reviews, food, travel photos, social media and becoming immersed in a region.  We couldn’t really do that because this was under wraps.  It was funny to see a bunch of fish out of water as we weren’t quite sure if we could, should or were able to talk about this amazing journey. 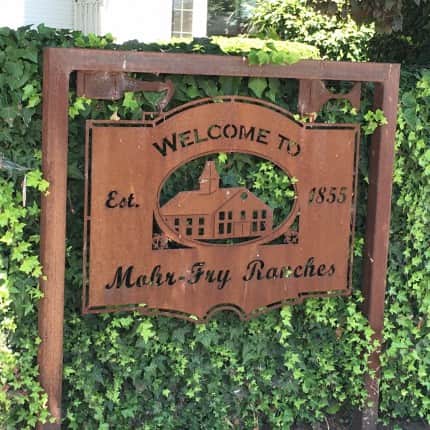 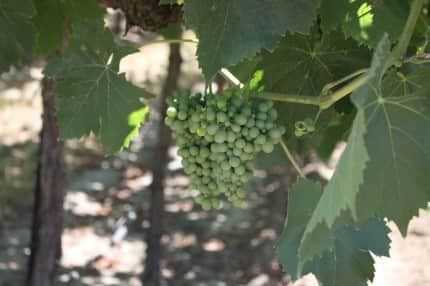 Mitch Cosentino and me

So let’s talk about Operation Masthead – an exercise in how four people with zero background in making wine actually made a wine.  We started with a visit to Mohr-Fry Ranch, which is run by Jerry Fry and his son, Bruce.  Ironically, a few weeks later, they were named the 2016 Growers of the Year by the California Association of Winegrape Growers. 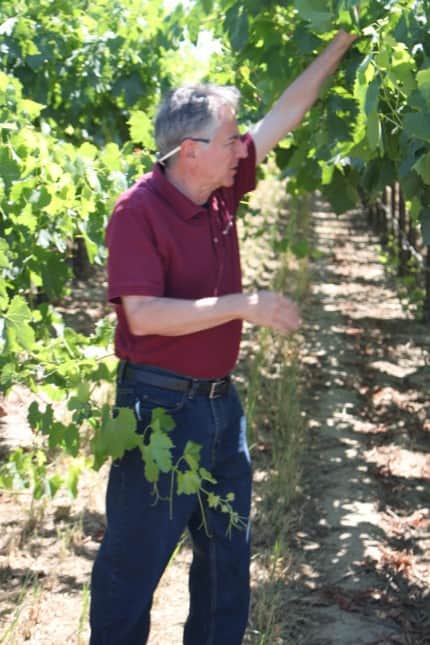 We are talking bad ass grapes.  Mohr-Fry is an iconic, family-owned vineyard and farm in Lodi with roots that reach back to the 1850’s in California.  The farms began in Mount Eden and over time extended into Lodi and the San Joaquin Delta.  The Fry’s farm about 12 varietals on 600 acres – all for winemakers of their own choosing.  The Mohr-Fry vineyard designation appears on all of these wines.  Mitch Cosentino talked about the importance and quality of these grapes and how he remembered when he first could purchase them for his wines after waiting for four years to just pick one row back in 1998.  He talked about the differences in grape costs of Cabernet grapes from Napa Valley at $6,300 a ton to the Lodi price of $750 a ton. 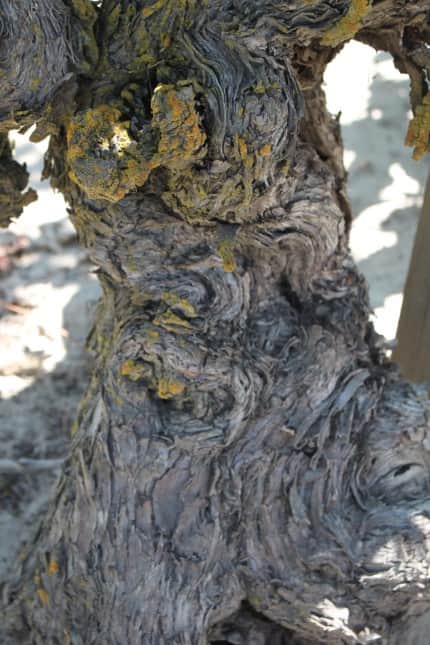 When Mitch and the Scotto Family began their relationship and the Scotto’s wanted premium Sangiovese, Mitch knew that Block 433 was the ideal choice.  The vineyard is farmed and certified according to Lodi Rules™ for sustainable wine growing.  As Mitch told us, “So we know our grapes were the best they could be.”  Walking through the gnarled, twisted vineyards, we felt history under our feet. 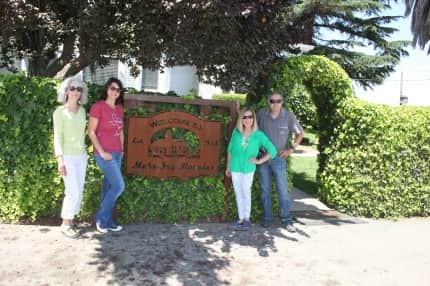 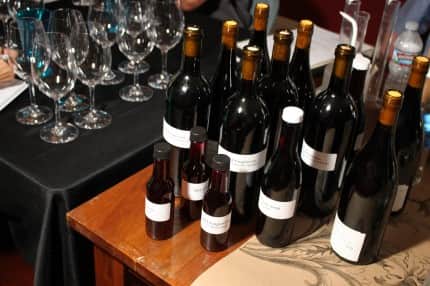 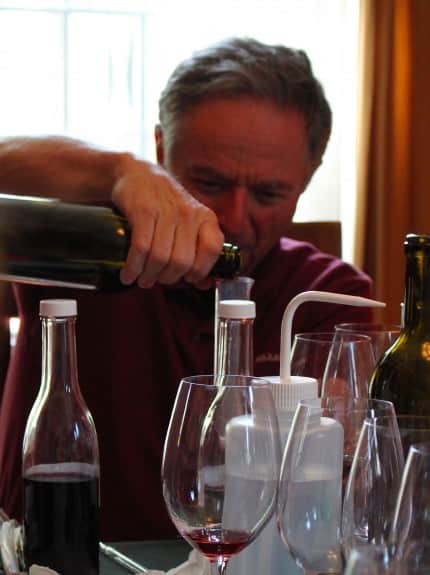 Now for the blending.  Picture a mad scientist lab with test tubs, Riedel glasses, beakers, 11 components to blend with and four different barrels of Sangiovese aged in different types of Oak – French, Hungarian and American.  We were guided by Mitch and Paul who taught us lesson after lesson about Sangiovese and Zinfandel being a match made in hell to the right palate cleansing crackers to use doing the process.  We debated, sipped, spit, swirled, debated, debated and debated some more for more than three hours.  We selected a final cuvee that was 100 percent Sangiovese that combined two barrels of Sangiovese; one aged in French oak, the other in Hungarian oak. 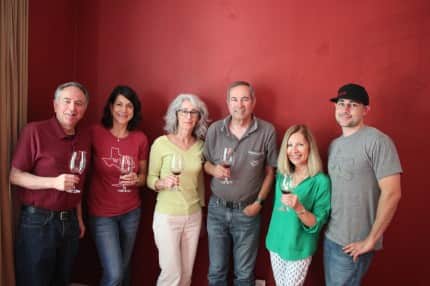 The name Masthead was chosen to reflect both traditional media – a standard newspaper page from long ago and printed wine reviews.  We made 528 bottles of Masthead 2014 Mohr-Fry Ranch Block 433 Sangiovese and will debut the wine next month in Lodi at the 2016 Wine Bloggers Conference.  We felt validated when Mitch told us that he was hoping we’d go with a different Sangiovese as he really wanted to use this one for his wine. 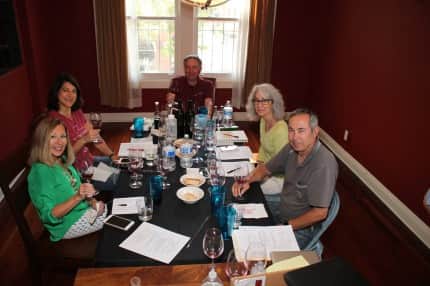 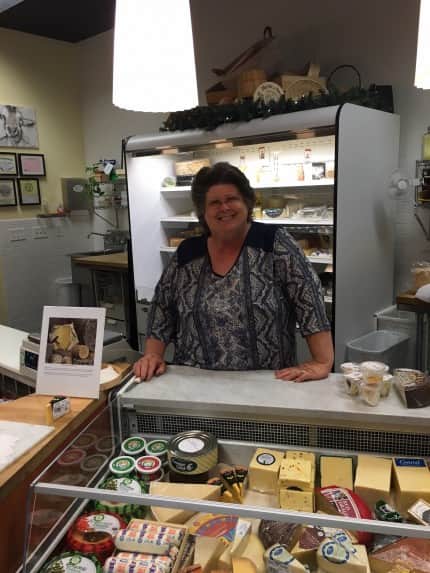 This was the main story, but there were also some other plotlines that evolved over the three- day period.

First,  Cheese Central, a gourmet cheese shop absolutely needs to be a must visit on your Lodi list.  Owner Cindy Della Monica is passionate, knowledgable and is not afraid to steer her customers to try new things.  I cannot wait to go back. 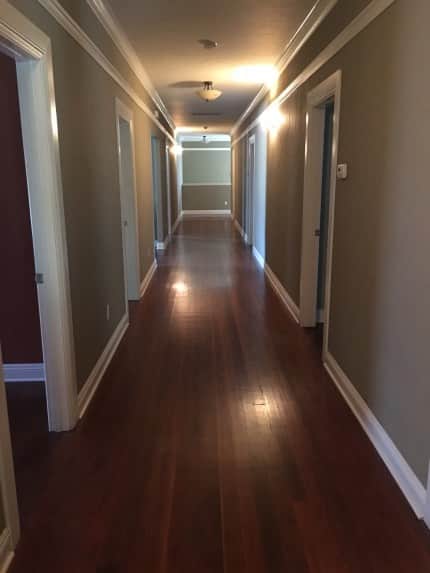 Cindy and I were the first women to stay at the Scotto apartment located upstairs from the tasting room.  It’s a converted old hotel that is such a really cool space and is where we conducted our blending session.  It is located in a cool spot in downtown Lodi, which had its own vibe – from the middle of the night ringing phone to the homeless guy named Sean in the alley to the “Garry’s Lounge Bar Rules” (no hoodies allowed) for the across the street dive bar.  I wouldn’t have been surprised to find a ghost or two roaming the halls.  I had an early plane out of Oakland on Wednesday morning and Bob and Bradley were nice enough to drive us to the airport.  I am not anywhere near a morning person and kept waking up dreaming that I missed waking up.  We originally had a 5:15 am pick up time, but Bob and Brad decided to come at 4:45 am.  Let’s just say that the doorbell scared me to death, I fell out of bed and then tried to navigate the light on the ceiling fan in the dark.  One cut hand later and a litany of words that I would never use in front of my kiddo, we were on our way at the originally scheduled time.

I will never look at a blend the same again and learned so much about the time, patience and talent that goes into the process.  Nancy and Peter were able to try the Masthead wine this week and all accounts point to this being a great wine.  And to read the stories from Cindy, click here.  Peter and Nancy’s chronicles are linked here, here and here.

Note: A special thank you to Bradley Gray for many of the photos shown above. Because I merged ours together, I’m not sure  where to issue a photo credit.