I know I’ve said this before, but I’m very lucky through this blog to meet some of the best storytellers, winemakers and chefs in the business.   I also get an opportunity through this blog and from my husband’s foodie love affair to eat some of the best meals in the city.  Because of that, it takes me a great deal to take pause.  My dinner at the Gaylord did just that.

When I was personally invited by Joanne Bondy, executive chef of the Old Hickory Steakhouse at the Gaylord to attend the Palmaz dinner, I was excited, but a little taken aback.  Most executive chefs of Joanne’s caliber aren’t issuing personal invitations to wine dinners. For those of you who aren’t familiar with Joanne, she received Esquire’s rating of 20 best restaurants in 2001 and cooked at the James Beard House in New York City three times.  And, this was the preview dinner for her October James Beard dinner paired with some of the best Napa cabernets out there.

While I’ve been to the Gaylord before, it was always around a special occasion brunch because my parents live in Flower Mound.  To this Dallas gal, it was a bit of a haul especially after having a few glasses of wine.  Get a cab, get a car, get a sober driver – this is definitely worth the ride. 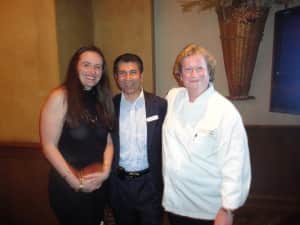 Saddiq Mir, vice president of food and beverage at the Gaylord, kicked off the dinner by introducing Joanne and Florencia Palmaz.  Joanne cracked us up with stories about celebrating the tenth anniversary in 2011 at the winery with stories about Amalia Palmaz, the matriarch of the family, on a four wheeler with her Prada shoes.  She also described a paella pan so large that it was stirred with a boat oar and when it became dark, the guests used mobile phones to provide light.  Just classic.

I was lucky enough to visit Palmaz a few years ago and was totally impressed with the wines and technology behind the winery.  There’s a huge tie to Texas.  Julio Palmaz, a doctor by profession, was in process of developing a heart stint at University of California Davis but couldn’t get research funds so he moved to the University of Texas in 1984 to continue his research.  While in California, Julio and Amalia had spent the weekends visiting wine country in Napa.  After moving to Texas, they attended a wine festival in Poteet, Texas, where Amalia decided they would be moving immediately back to Napa after trying the wine if the stint was a success.

In 1986 that happened and they returned to Napa to buy one of the last pre-prohibition wineries which formerly was a brothel and had made no wines since 1912.  The home’s original owner, Henry Hagen, one of Napa’s first winemakers, produced award-winning wines in the 1800s at Cedar Knoll Vineyard and Winery, but Prohibition killed his business. The winery fell into disrepair and the vineyards were forgotten for almost 80 years until the Palmaz family saw their potential.

Florencia talked about the 28 years that they spent in Texas, how it felt like home and how Texas embodied “big thinking” and imagination.   She talked about the underground project that she, her sister and her mother embarked upon several years ago to make white wines when her father was set on only making cabernet.   They made only 50 cases with the understanding that the family would drink it all themselves.  They didn’t mention their project to Julio for eight months and even painted the barrels red.  Finally, he figured out the game and told them, “you girls are cheating on me – you can each play with one white wine.”  Having tried the three wines, I have to tell you how glad that I am that they did. 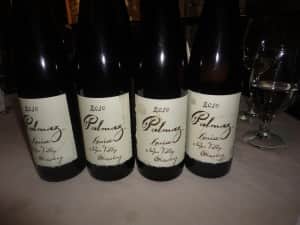 We began the reception with the 2010 Palmaz Riesling “Louise” from Napa Valley.  It was tropical, off dry, fruity but not too sweet.  Fabulous, but very hard to get.

Our first course was creamed mussels with roasted fennel and paprika seared octopus paired with the 10 Palmaz Chardonnay “Amalia.”  It was a match made in heaven. 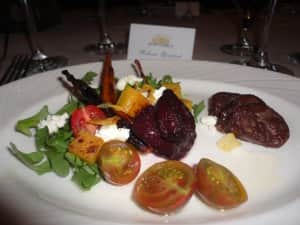 Our second course was chapa style vegetables and morcilla with a goat cheese vinaigrette paired with 07 Cedar Knoll Vineyard Co. Cabernet Sauvignon which had nice citrus, tropical fruits and minerality.  It was a very well balanced wine that worked well with the course.  While the wine could age for years, it was very smooth.  I tasted big berry, mocha and it was well structured. 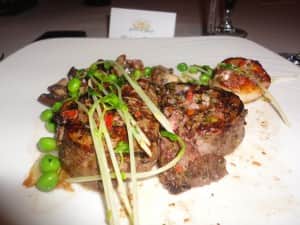 The entree course was grilled Tenderloin with chimichurri, wild mushrooms and peas.  I tasted blackberry, spice and leather in the 07 Palmaz Cabernet .  It was fabulous. 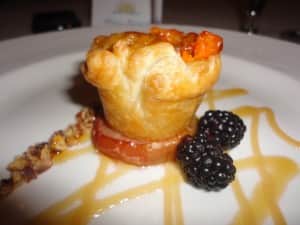 Our dessert course was a dessert wine paired with a family recipe from Amalia.  Her Dulce de Batana and Port Salute Tart combined with the 10 Palmaz Muscat Canelli “Florencia.”  A perfect close to a perfect dinner – simple, fresh and light.

Our dinner table had a very lively conversation about when toasting, you must look each person in the eye individually.  I’m not sure if the ten years of bad luck will happen, but I’m not willing to take a chance … here’s looking at you.

Side note: The Old Hickory Steakhouse is up for best steakhouse.  Do me a favor and click here to vote.