When I received the invitation to attend a Mollydooker tasting, blending and dinner exercise with Sparky Marquis, I was a little star-struck.  As a marketing person by day, I have long admired the winery’s efforts to connect with other “Mollydookers”, or left-handed people, and build a brand that was unique, fun and appealing.  Krissy Miller, marketing guru at Mollydooker, and I have communicated for a long-time on Twitter and I was excited to meet the voice behind the social media effort for the wine label, so I asked her to meet aside from the tasting.  We made a plan for lunch and the request was Mexican food.  I offered to pick her up and she told me there’d be some others folks attending and they’d meet me at Gloria’s.  Naively, I didn’t ask who else would be coming and assumed it would be a larger team of PR and marketing folks from Mollydooker and maybe a few folks from the Texas distributor. 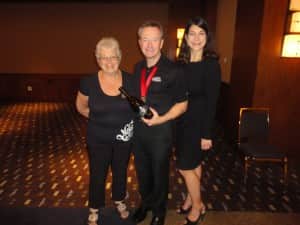 I was wrong.  When I arrived at the restaurant I noticed a team of three people in branded Mollydooker shirts bearing bottles of their top labels.  As I got closer, I realized that aside from Krissy, none other than Sparky Marquis, co-owner and winemaker (along with his wife Sarah) and his mum, Janet were joining us.   I was immediately greeted with a left-handed shake by the team.

We began our lunch by tasting the 2010 Enchanted Path, Carnival of Love and the Velvet Glove.  I am a huge fan of the Velvet Glove which is harder to find since a forklift dropped a crate of it containing 462 cases in July of this year.  Mollydooker lost one third of its inventory — almost all of its U.S. allocation — of this almost $200 a bottle wine.  But instead of “crying over spilled wine” and the profits lost, they approached it as an opportunity and five days later called the local TV stations and newspaper to see if anyone had an interest in the $1 million loss of wine.  The story immediately went global.  In a note of irony and a bit of luck, the insurance company had upgraded Mollydooker’s insurance status six days prior to the accident because of the care they took in storing their wine in three separate tracks vs. one.  And judging from the comments Sparky made during the lunch, I think it may become harder to obtain the remaining Velvet Glove inventory as Sparky Marquis himself has expressed a commitment to drink as much of this wine as he can.

Sparky, who is known for his time at Fox Creek, Henry’s Drive, Parson’s Flat and Marquis Phillips, began to tell me their story with fun interjections from Janet.  I had assumed Mollydooker was backed with big marketing dollars and lots of money however the true story is that Mollydooker was almost a story of failure, but that changed due to the perseverance of just four people and a miracle or three thrown into the mix.

Mollydooker was founded with an investment of $1,000 in 2005.  In March of 2006, Sparky and Sarah realized money was running low and let their grape growers know they could only afford to pay $200 a ton for grapes.  They encouraged their suppliers to sell to someone who could afford to pay but every last grape grower who could afford to stay did.  As Janet put it, “they had more faith in us than we had in ourselves.”

They were nearing the wine blending and bottling stage and received a call from their financial and legal advisors requesting a meeting.  Mollydooker was down to its last $17 and the advisors were worried they would be in default based upon the payments still due.  Because Sparky and Sarah believed in paying their invoices on time they realized they had about two weeks for a miracle.  A couple of days late that miracle arrived.  A gentleman, who  Sparky had impressed at a local networking luncheon a few weeks prior,  came to the winery and asked him if there was anything that he needed.  Sparky proudly said everything was fine.  The businessman asked the question again and said he was leaving for China for a month and wanted to make sure Mollydooker was around when he returned.  At that point, Sparky broke down and told him the truth. Without asking for a business plan, the businessman asked what Mollydooker needed to survive the month.  A check was written on the spot for $300K.  The blending continued during the month and the label was named a few days later after a brainstorm between Sparky, Sarah, mum and his father.

Sparky and Sarah knew they would run out of money again soon, so they tried to think about the one avenue where they could get out publicity about their wines in the biggest way.  Enter Robert Parker.  Sarah was sure that Robert was also “a Mollydooker” (or left hander) from a prior meeting.  The team analyzed several photos, but couldn’t be sure.   Robert usually doesn’t take random appointments and is booked for months ahead so after much debate they sent him an overnight package of wine on a wing and a prayer.  Surprisingly, Parker bit and Sarah was right about him actually being left-handed.  He gave them two dates in a two month period to come visit him.  They chose the first one on June 10 as they knew they’d run out of cash by the second.  Maxing out their credit cards, they booked two flights to Baltimore.  Upon arriving in the States and knowing this was their last shot, they were disheartened to hear that Parker had suffered an injury, was hospitalized and might not be able to make the tasting.  But miracles happened again and Parker rallied.  He literally hobbled to the Oregon Grill on that date refusing to take his pain medicine, so he could properly taste the wine.

He invited them to stay for lunch after the tasting and suggested that the Mollydooker Violinist would be perfect with soft shell crab.  He ordered some and Sarah immediately ate it like you would eat traditional crab. Parker first stared, asked her what she was doing and then taught her the etiquette of eating soft shell crab.  At the end of the lunch he made an offhand comment that he’d try, but couldn’t guarantee, to fit them in his Best Value Wine Guide as it had been delayed for ten days at the printers.

Sparky and Sarah had no idea had no idea what the Best Value Wine Issue even was or how quickly their lives would change.  On July 1, they received a phone call at 3 a.m.  The Mollydooker Boxer was rated the best value wine in the world under $20.  The Mollydooker Two Left Feet, named in honor of Sparky’s inability to dance, was named second best value.  The Mollydooker Maitre’ D was named fourth best value and the Violinist was named the top white.  The winery sold out of its existing inventory in America in 19 days.  But they still had no money, only purchase orders, and had to convince the bank to lend them the money to get the shipments to their customers.  With this success, they immediately paid back the angel investor, growers, and creditors and gave the staff bonuses and raises.

A little while later, Parker reviewed Mollydooker’s two new wines, The Carnival of Love and Enchanted Path, and gave them 99 and 96 point reviews.  A wine that no one had ever tasted sold out in five days and by September they were cash flow positive.  When a year later a vineyard that met their requirements came up for sale, they jumped at the chance and acquired the label’s first real asset and that became the home of Mollydooker.

Is it a charmed life, miracles or luck?  I’ve heard that you make your own luck and I am a big believer in karma.  When hard working, talented, generous, hospitable, charitable and kind people set out on a path — especially with an infectious enthusiasm — I’d like to think the world wants them to succeed.  When I asked about their success, Sparky answered that he doesn’t think about things that way, the family is just having the time of their lives and doing what they love.  The simple premise behind making Mollydooker wines is to take the time to do things right and the results will follow.  Sparky wants the wines to taste two times more expensive than the list price to give his customers a value and make the wines accessible.  And, the founders believe in miracles and know those miracles became the pathway to their success.

I learned much about the family during my conversations and thought it would be fun to talk about the top things you don’t know about Sparky, Mum and Mollydooker:

9 thoughts on “Mollydooker: The Story Behind the Story”