Magic and Wine at Checkered Past: The Perfect Off-The-Beaten Path Date Night

Peanut butter and jelly. Cookies and milk.  Magic and wine?  Not quite the classic mix, but one that completely worked.  I hadn’t been to a magic show since I watched my then eight-year-old daughter perform at Summer camp and let’s just say it wasn’t quite what I had in store for me when we attended Trigg Watson’s Wine and Magic show at Dallas’s Checkered Past Winery.

Watson started his magic career in Australia, his original hometown, and later honed his craft while living in New Orleans.  He attended college at Southern Methodist University and moved to Dallas, which is how he began performing at Checkered Past – although his resume includes award-winning performances, corporate events, international magic competitions and several national television shows.

Checkered Past is an urban wine pub located in the historic South Side featuring quality Texas wines with some wines from its own winery in Dallas, locally brewed beer, along with hand selected wines from around the country and the world.
​
Co-founder, owner, and winemaker Sandro DiSanto is a first generation American and 100% Sicilian with deep roots in winemaking in his family.  Both grandfathers made wine in Sicily, so you could say it was in his blood.  He and his brother-in-law, Scott Relyea, co-founded Checkered Past Winery and partnered with Carolynne Chancellor, vineyard owner, and this urban winery was born.

Checkered Past is known for doing things differently.  They host music, painting, hip hop acoustic, two wheel (bike) and any other event you would not necessarily associate with a wine bar, which is a great addition to the Dallas wine scene. 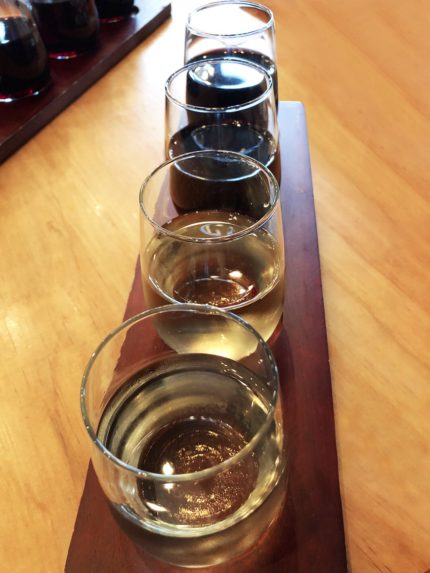 I was invited to the monthly magic night, and I attended the early show on Saturday. The sold-out event was filled with groups of people enjoying wine and great food before the event.

Trigg’s show was fun, creative and interactive.  Technology was the cornerstone of the show and he brought in a small video recorder as well as an Amazon phone app (this one was unbelievable) to give a fresh and modern take on magic.  The illusions didn’t seem like anything was staged … and I don’t think any of us wanted it to end.

But where does the wine come in?  And the food, of course….

We ordered flights of wines. I choose to focus on Texas and had the chance to choose from a variety of wines that mixed and matched from Checkered Past’s own labels and other Texas wineries.

We also tasted (thanks Sandro) a great artfully created charcuterie board, roasted mixed nuts, and a tasty flatbread. The menu was diverse and there were several things I wanted to try, but sadly I was full.

This is a fun and fabulous date night or a place for a night out with friends that is completely off the Dallas beaten path.  Wine and magic might not be your idea of peanut butter and jelly yet … but give it a try.   Also, here’s the calendar for Checkered Past to see some of their unique events at the winery – https://www.checkeredpastwinery.com/calendar.

Trigg Watson is offering a discount here and use code “TellAFriend” to receive 10% off ticket purchases on July 14 with show times at 7:00 p.m. and 9:30 p.m.