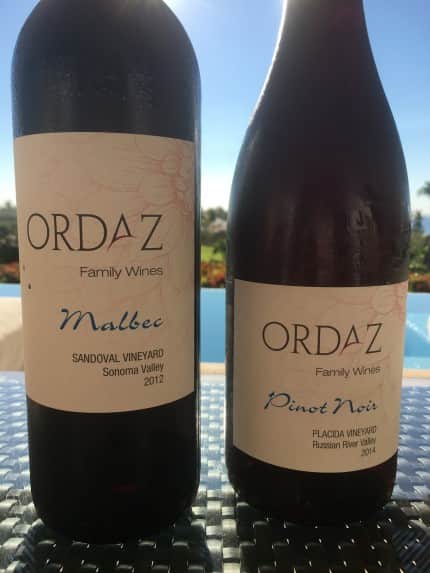 It’s funny how things in life happen when you least expect it. I had a last minute business trip for a paying gig to Las Vegas, which meant I participated without wine in the first session #winestudio for Ordaz Family Wines. I was completely excited about the next session as I knew that Jesus (“Chuy”) Ordaz is a walking success story of the American dream.  Unfortunately, a flu completely knocked me out the next week and the only fluid in my glass was a cocktail of Dayquil and Nyquil.

So here I am this week tasting the gorgeous wines of Ordaz Family Vineyards – this time from a family Spring Break trip to the gorgeous resort of the Four Seasons, Punta Mita.  And, let’s just say that I am in a much better place in all aspects as compared to last week.  However, I did rely on Twitter accounts (except for the first tasting) and other great blog posts from those who did a great job covering the story that needed to be told.

Jesus Ordaz is the kind of guy that doesn’t take no for an answer.  For him, it took 33 times to make it to the U.S from a family fruit stand in Michoacán, Mexico.  He was the type of person who was going to do anything he could to support his family.  He started chopping wood at Korbel Cellars and later went to Kenwood Winery as a migrant picking grapes.  People who work hard get noticed and soon he was promoted to foreman where he led the charge for the benefits of organic farming.  After Kenwood was sold, his next path took him to start his own vineyard management company, Palo Alto Vineyard Management Company.  Fast forward almost 20 years and they now manage 400 acres of vineyards.  His son, Eppie, joined the business after realizing accounting wasn’t his calling and began his quest of making wines and founding Ordaz Family Wines with his brother, Chuy Jr.  His founding principal was to make wines from one vineyard in small parcels of land made from grapes harvested by the company.

We tried two wines during #winestudio that shattered my preconceptions of what I thought to be typical of Sonoma wines.  Eppie, the winemaker, talked about the two wines we tried and covered the very storied history of his family.

– 2014 Pinot Noir from the Placida Vineyard in the Russian River Valley, which is named after their grandmother. It is an awesome Pinot with black cherry, cranberry, raspberry, spice and earth.

– 2012 Sonoma Valley Malbec from the Sandoval Vineyard Malbec produced from only two acres of grapes from rocky clay soils. It was an intense wine with cassis, plum, mocha and black fruit.

As we wrapped, Eppie shared his mantra for producing wines – to make exceptional wines reflecting unique characteristics of the places they are farmed.  It’s all about embracing what is unique about the vineyards.  I love seeing the successful fruition of the realizing the American dream and building a legacy to be enjoyed for generations to come.

4 thoughts on “Living the American Dream: An Ordaz Family Journey”