Happy New Year to everyone!  I hope you had a great time and good wine to ring in 2011.

Back in November, I read my friend Bruce’s East Dallas Times article about how Jon Whitaker, the owner of local wine shop, Kindred Spirits had secured one of the highly rated Charles Smith Royal City Syrahs.  Charles Smith is known for throwing some great parties, including one with burlesque dancers with flaming pasties at the Wine Blogger’s Conference in 2010.  But I digress, that is another story for another time, with you over wine.  This bottle received a perfect 100 score from the Wine Enthusiast and a 98 from Robert Parker.  Six bottles made it to the Dallas area – five were sold at ridiculously inflated prices to a select list of customers who were “lucky” enough to be on the list in the first place.  Instead of taking the same approach as his brethren in the area, Jon conducted a drawing to see who would purchase the wine at its retail price.

I respected this unusual approach so I reached out to him.  We met at his store at Mockingbird and Abrams one chilly Wednesday afternoon and instantly was greeted by his vivacious, not to mention utterly charming ten-year-old son, Chris.  It turns out that the TABC will let the oldest child work in the family business.  After watching he and Jon interact, I was impressed at how well he knew the store and the products that they offered.  Jon has an interesting wine/spirits distribution, operations and sales background.  He put himself through Baylor and then took a sales rep job after school in a territory so bad that he joked about Schlitz Malt Liquor keeping him alive because his clients knew no one else would bring it in.  He then successfully worked in hospital administration until his hospitals were acquired by a larger chain.  That’s when he decided to get back in the business and acquired Kindred Spirits.

It had been a few years since I had been in Kindred Spirits and I remember the wine selection being pretty pedestrian and predictable – your basic grocery store fare.  Whitaker has definitely made the selection interesting with everything from Grange to an “off the beaten path” selection of wines under $15.  He highlighted one in particular, the 09 Oveja Negra Cabernet Franc Carmenere Reserva from Chile.  Since I received a flip cam from Santa this year, I recorded his thoughts on why he liked this wine.  After trying to get it to download for almost two hours, I give my concession to the great technology gods and my apologies to Jon for sticking a camera in his face.  Update: You can see the video on the Dallas Wine Chick page on Facebook. 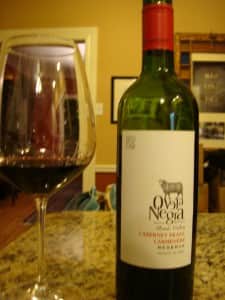 He gave me a bottle to taste and I found that it had evolved drastically from day one to day two.  Wow – today it was mellow and silky with hints of spice and blackberry with a great mouth feel.  Today it had great balance and an almost velvet mouth feel.  At less than $10, it is a good buy on day one, but a great buy on day two.

Kindred Spirits is definitely worth the trip and I’m excited to check out some of his recommendations like the La Joya Merlot or the Cycles Gladiator Pinot Noir.  It’s nice to have a family owned wine shop with someone in it for the love of offering all of his customers a fair shot at the best products that he can bring to the market.