I met my friend, Bruce Felps in the early 90’s when I decided, career wise, that it was time to go from being a public relations generalist to learning about technology public relations.  I still remember the eye roll and the sigh that ensued when he found out he was designated as the one who had to teach me the business.

We had a tough week as I tried to wrap my head around a business that was absolutely foreign to me.  Toward the end of the week after a frustrating tutorial, I put a postcard featuring a picturesque scene of a lovely chapel.  I addressed it to Bruce and wrote “Wish you were here”.  I waited for his reaction.  You see, I had done some work with Stewart Enterprises, a chain of funeral homes and cemeteries, and the postcard was a scene from one of those chapels.  At that moment, my relationship with Bruce went from forced-mentor/mentee to an actual friendship and over the years Bruce became family.

My husband and I, Eric and Julie and Bruce and his then wife, Caroline, had an almost monthly “non dinner party, dinner party.”  The theme was simple, it was BYOB and the conversations were always lively – ranging from politics to religion to jobs to relationships to animals.

Fast forward to about three years ago when Bruce asked me to write a wine column for Black White and Read, a publication dedicated to East Dallas News.  I asked him why anyone would ever care about what I had to say about wine.  He responded to me that he didn’t like wine but I made the subject interesting to even him.  He said my experiences were fun and I could tell a great story.  Coming from him, the consummate writer, I was humbled.  This column was the impetus of Dallas Wine Chick.

When I got the call Wednesday morning, October 5th, that Bruce had suffered a brain aneurysm, I rushed to the hospital.  My friends, Eric and Julie, were there too.  Eric read him the paper because like any journalist, he was a news junkie.  We had our usual snarky commentary and told him that it was just like him to be overdramatic to bring us together for a long overdue visit.  We spent the next few days hopeful because there were some positive signs, but were realistic about what could happen.

I had to leave to get ready for a work trip to Stockholm, so I kissed his cheek and told him that I expected him to be awake when I got back on Friday, October 14th.  Unfortunately, Bruce passed away on Thursday morning.

We had been asked to watch, Bogart, his cherished cat.  When I went over there to feed him, imagine my surprise to find the original postcard now faded that I mentioned above on his bookshelf.  I had just told a friend the story of how we met and I was touched that what was once a sarcastic vehicle that started a long-time bond was a special memento he kept all of this time. 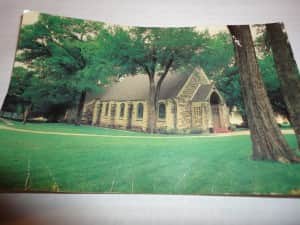 On Saturday I got the call from his sister, Kathy.  She asked John and me if we would consider adopting Bogart.  You see, Bruce’s last words to Kathy, before he went in a coma, were to please take care of his cat.  So, Bogart is joining the chaos of the Ofenloch family come next week because that’s what friends do.  His life will also change when he enters the world of a six-year old, two cats and the general craziness of our lives.

Bruce, thank you for encouragement, sarcasm, honesty, intelligence, laughter and most of all, friendship for the past 17 years.  I will miss your smile, conversations, self deprecating humor and always knowing that you were there if I needed you.  I hope you felt the same.  I raise a glass to you (beer just this once) and wish you peace.

10 thoughts on “In Memory of Bruce Felps: How a Blog Was Born”