This summer, a number of iconic brands celebrated important anniversaries.  The trend continued in August when Georges Duboeuf, founder and co-owner of Les Vins Georges Duboeuf Wines, came to Dallas to celebrate the 30 year anniversary of working with his dear friend, William Deutsch, chairman of Deutsch Family Wine & Spirits and the importer of Duboeuf wines.  The families have been friends for many years and have children that have grown up together in the business. 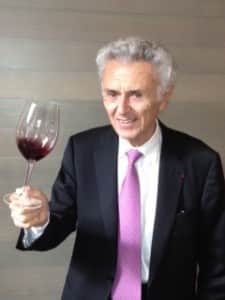 Georges wanted to personally visit key cities in the U.S. including Dallas, Boston, Miami and New York to pour his wines because 2011 was an exceptional year and the U.S. accounts for 25 percent of his imports.  Les Vins Georges Deboeuf is also the number one French wine brand in the U.S.  He credits the amazing weather in April and the early harvest in August in 2011.  He talked about the need for nature to cooperate and allow the winemaker to have the good grapes needed to make a great wine.  Even though he’s been involved in the business for many, many years, he still considers himself an apprentice of wine.  He talked about how each year can be a harrowing experience – from the weather, to the grape quality, to the harvest to the winemaking process. 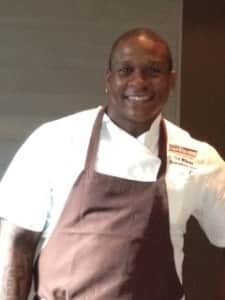 We met him at Marquee Grill where Celebrity Chef (and friend) Tre Wilcox prepared a set menu followed by several courses not on our printed menu.  The food was off the charts.  Great food paired well with wine seems to be the core of Georges approach to life and he referred to successful pairings as poetry.  We began with the 2011 Georges Duboeuf Macon-Villages Domaine Les Chenevieres ($13.99) as an apertiff.  The wine was full of citrus, mineral and notes of flowers.  It was a very nice sipping wine.

I loved his story of how his family had a few acres of vines in Pouilly-Fuisse and he learned winemaking from his uncle and older brother.  At 18 years old, he began delivering the family wine to local restaurants.  He decided to expand to other local wineries and in 1957; he created an association of 45 producers in France, one of the first associations of winemakers in France.  He basically knocked on doors and sold a value proposition to the individual winemakers of creating a group of special winemakers who could represent the region well.  In 1964, he founded his wine label and now the company works with over 20 wine co-ops and 400 growers.

You may be thinking of Duboeuf wines as the easy drinking Nuevo Beaujolais released every November, but the wines we tried were so much more than that.  He describes this harvest as the most feminine that he’s seen and talked about the perfect moment for maturation of the grapes and how that affected the balance in the wines we were about to taste. Georges tastes an average of two hours per day outside of harvest and five hours a day during harvest. 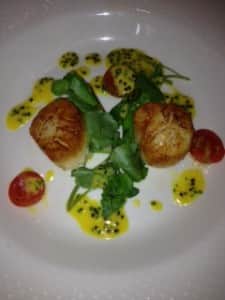 So let’s talk about the pairings.  We started with the seared diver sea scallops with caviar champagne sauce, asparagus, watercress and tomatoes with the 2011 Georges Duboeuf Pouilly-Fuisse Domaine Beranger ($25.99).   I am still dreaming about this match – the scallops paired perfectly with the pineapple, floral notes, vanilla, almond and minerality of the wine.  Fifteen different grapes are sourced for this wine from four different villages. 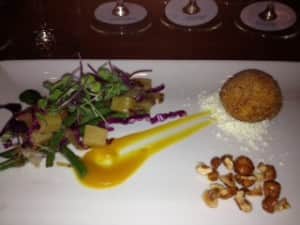 Our next course was paired with two wines.  The roasted beet salad with grilled endive, French beans and crispy goat cheese was served with the 2011 Georges Duboeuf Beaujolais-Villages ($9.99) and the 2011 Georges Duboeuf Chiroubles Flowers Label ($13.99).  The Beaujolais was full of fruit – cherry, black currant and licorice.  The Chiroubles was much more elegant with notes of violet, black fruits and cassis. 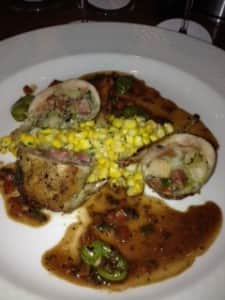 The third course of truffle sausage stuffed quail with sweet corn succotash, fava beans and tomato demi-glace was served with the 2011 Georges Duboeuf Morgon Jean-Ernest Descombes and the 2011 Georges Duboeuf Julienan Chateau des Capitans.   The Morgon reminded me of a burgundy with black fruit, cassis and violet notes.  The Chateau des Capitans ($18.99), named after a famous culinary chateau that he acquired ten years ago, was a powerful wine.  It had notes of mocha, vanilla and black fruit. This was really nice today but I think would be spectacular in a few years.

Definitely give these wines a try – for taste, for affordability and for expanding your palate, they make for a fun journey.  And if you try the Pouilly Fuisse with the scallops, you’ll experience a match made in heaven.