It’s always a good segue when talking with a winery owner when you can show a carefully stored Magnum of their first vintage of wine.  I usually don’t have that opportunity, but when I was asked to be a guest at the Hourglass dinner at Private Social, I knew I had a great opening line.

Jeff Smith, the owner of Hourglass and coincidentally one of the key marketers who developed the Skyy vodka brand and cobalt blue bottle, was in town to host a dinner for Hourglass customers.  Jeff told us how Hourglass is a dream for him, but it surely didn’t start out that way.  In 1964, his dad decided to move to Napa after a long and established career in radio and TV.  In the mid 1970’s, he started the Wine Country Inn because he thought Napa eventually would be a destination point.  In the first year, the inn achieved 98 percent occupancy.

The next step was to establish a vineyard on neighboring property.  His father liked Zinfandel so that’s what he grew.  He sourced the fruit and had no big aspirations.  His father passed away in the 90’s and Jeff’s mom called him back to discuss selling the vineyard.  Jeff had other aspirations and saw the paradigm shift occurring with cult cabernets like Harlan Estate, Colgin and Screaming Eagle.  He told his mom he wanted to lead the vineyard and she told him, “Jeff, you know nothing about farming.”  He realized she was right, so he made the call to his childhood friend, who was a Masters student in the enology program at the University of California Davis, who talked the department chairman, Dr. Mark Kliewer, into doing a site evaluation.

The result was surprise to everyone – the site had the potential to be a producer of some of the best Cabernet in the valley due to its unique soil – a blend of sand and clay formed from volcanic rock, which forms the shape of an hourglass, hence the name.  He brought in a dream team of consultants including Winemaker Bob Foley who worked his magic to make some of the best cabernet in the Valley.  Fast forward several years and many great reviews and the winery recently purchased Blueline Vineyard, a 50-acre property on the Silverado Trail.   About 50 percent of production is directly off of the mailing list (disclosure: I am a member) and 50 percent of the production is retail/restaurants.  Jeff believes it is important to visit his markets to meet his customers and showcase the brand.

Insider tip:  Jeff’s had a long-time flirtation with Pinot Noir.  I saw a passion there that I think might become a reality at some point.

Now onto the wines and dinner.  We started with a wild mushroom soup with savory goat cheese custard paired with the 09 Hourglass Blueline Vineyard Merlot.  I tasted notes of blueberry cobbler – it was juicy, smooth and well balanced.

We tried two vintages of the Hourglass Cabernet Sauvignon.  The first one was the 09 paired with roasted bone marrow with house pickles, marmalade and crostini.  The second was the 07 paired with peking style duck breast with duck confit, enoki mushrooms, glass noodles and bok choy.  I loved the 07, but would like to see the evolution of both in another ten years or so. 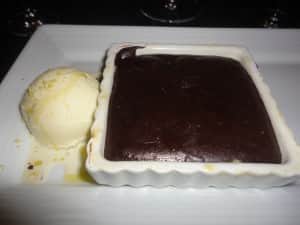 The dinner ended with Jeff’s warm hospitality and a dessert of warm chocolate budino with olive oil gelato and NV Kopke Porto 10 Year Old Tawny.  It was a great dinner with fantastic wine along with a funny, engaging and charming winery owner who made me want to cherish the Magnum that I have at home for another ten plus years.