Honig Wine and Bailey’s: A Night of History (and Great Wine)

Honig Wine and Bailey’s: A Night of History (and Great Wine)

Many years ago on a wine trip to Napa, my friend Jennifer introduced me to Honig Vineyards.  Aside from having a wonderful time at the winery due to their hospitality, I was impressed with the quality of the wines and brought home a case.  When I received my invitation to attend the Bailey’s Prime Honig dinner, I was excited because it had been several years since I last tasted their wines.  And, when I spoke further to Jennifer Jaco, Bailey’s Prime Sommelier, about the special wines that would be poured, I was thrilled. 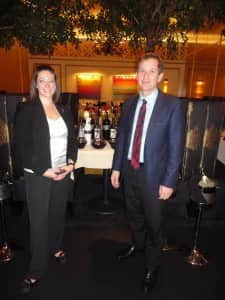 Michael Honig, a funny and charismatic winemaker, gave some background on the winery and the wines that we were going to try that night – many that you could no longer find even with a long network of contacts and unlimited pockets. Each year, there is one fund-raising event, Premiere Napa Valley,” that Napa winemakers participate in to take care of the winery workers.  Only 200 Napa wineries can auction special wines made exclusively for the auction and they pull out all the stops.  Honig was no exception.  The winery only produced six cases of the 2002 Honig Cabernet, “Bartolucci Vineyard,” designed to showcase two generations of winemakers working together and celebrate heritage.  Five of the cases were acquired by Centennial in Dallas and Jennifer acquired them when it sold its fine wine collection. More to come on this wine later that was marked 46 out of 60 bottles. 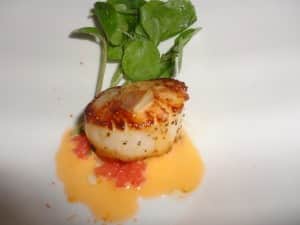 We begin with the Honig Napa Valley 10 Sauvignon Blanc paired with absolutely fantastic Pan Roasted Sea Scallops, Water Cress Salad, and Ruby Red Grapefruit Emulsion. This was a food/wine marriage made in heaven.  Still a crisp, refreshing wine, but with enough tartness to be interesting.

The next course took us to Agnolotti pasta, braised lamb, wild mushrooms and caramelized onions paired with the aforementioned 02 Honig Cabernet, “Bartolucci Vineyard.”  I tasted a burst of raspberry, followed by tobacco, cedar, earthiness, mocha.  It was an intense wine with a finish that wouldn’t end that evolved in the glass over the meal and I was sad when I had my list sip.  Crazy good.  You can find one of 13 remaining bottles on Bailey’s wine list at $300 as the vines have now been replanted. 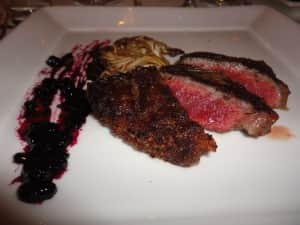 We moved to the 04 Honig Cabernet Sauvignon “Bartolucci Vineyard,” Napa Valley, so we could compare the vineyards.  This had more of a sweetness to it, but had many of the same notes.  But, in comparison, it was just a baby.  However, served with the Japanese Akashi New York Strip Steak with grilled radicchio and huckleberry marmalade, it was a nice match.

We ended with the 08 Honig Sauvignon Blanc Late Harvest, Napa Valley, a wine that I am very happy to say is currently in my cellar.  It was served with rhubarb “sponge” and cream and was a great match.  Lots of honeysuckle, apricot and make it often referred as “nectar of the gods.”

Note: since this dinner both Grant Morgan and Jennifer Jaco are no longer with Bailey’s.  And, that is an absolute shame as they built something pretty special.