Growing Up Gaja: A Conversation with Gaia Gaja and Delving into Ca’ Marcanda with #winestudio 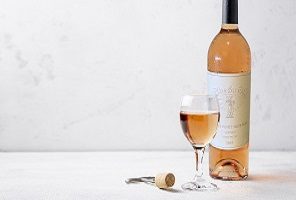 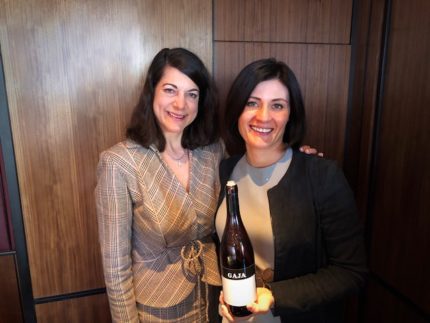 Me and Gaia Gaja

If Italian royalty comes knocking, one answers the call with an appropriate curtsy.  When I received the invitation to meet Gaia Gaja, the daughter of one of Italy’s most world-class families of wine, I was in awe.  When I met Gaia and found how warm, open and engaging she is, I was impressed.  By the end of our lunch, I had reached the reverence stage.  What a fabulous person with amazing stories to tell! 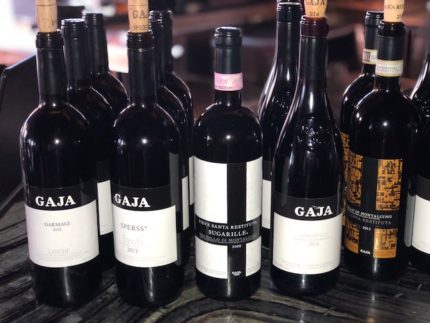 Gaja is an Italian wine producer from the Piedmont region and the Langhe district, which was first known for Barbaresco and Barolo wines.   In 1859, Giovanni Gaja, opened a tavern in Barbaresco and served his wines made from the five acres of vineyards that he owned.  In the 30’s, the wines were bottled and the family started to acquire more vineyards in the region.

Gaja later expanded its empire into Tuscany with the Pieve Santa Restituta estate in 1994, the Gromis property in La Morra for production of Barolo Conteisa Cerequio in 1995, and the Ca’Marcanda property in Bolgheri, Tuscany in 1996, and later diversified into Brunello and Super Tuscan wines.  Today, the winery produces 18 wines with an annual production of 350,000 bottles.

Angelo Gaja, the great-grandson of Giovanni, and today’s president, started working at the winery in 1961 after getting his wine degrees at the Enological Institute in Alba and at the University of Montpellier.  This is where he began the vinification and modern winemaking techniques that he learned in France like barrique aging, hybrid French bottle formats, longer corks, and clonal and massal selection in the vineyard.  This eventually led to him being named as “the king of Barbaresco” and he is credited with elevating the winery to world-class status and establishing Barbaresco as one of the great appellations of the world. 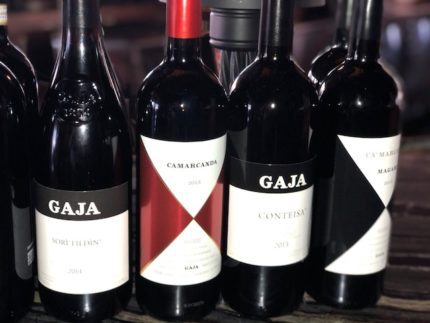 Today the day-to-day operations are handled by Gaia and Rossana Gaja, the fifth generation of the family to make wine in Barbaresco.  Gaia was on a multi-city tour through Dallas, Houston, New Orleans and Florida, hosted by the Terlato Wine Group.  I met her at the downtown Del Frisco’s Double Eagle Steakhouse in Dallas with one other member of the press and a small group of the city’s top restaurant sommeliers where she talked about growing up Gaja and how 95 percent of the wineries in the region are family wineries.

“My parents partnered in life and business,” she said. “My mother, Lucia, was the real boss – the cook, the wife, the mom.”

Gaia talked about how the Gaja wine business really is a family business.  “We meet as a group to discuss, agree (sometimes), disagree (sometimes) and that’s how we ultimately reach a decision.”  Since the 2013 vintage, when the former cellar master retired, she’s been intimately involved in the making of the wine.

“The winery truly is our baby – it’s not about ego.  The winery must be strong for future generations. We have a passion for wine.  We don’t sell particular grapes, we sell Gaja” she said.  “The wine is about showcasing memories – the memory of time, the memory of culture.” 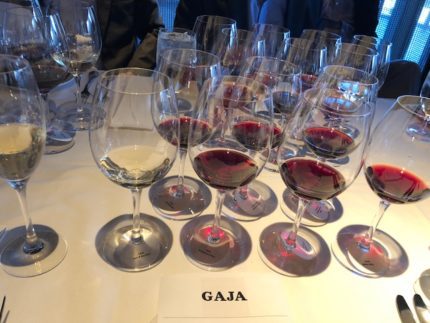 We had the following line-up of delicious wines that I won’t review in detail due to Ca’Marcanda #winestudio three-week session that followed our lunch: 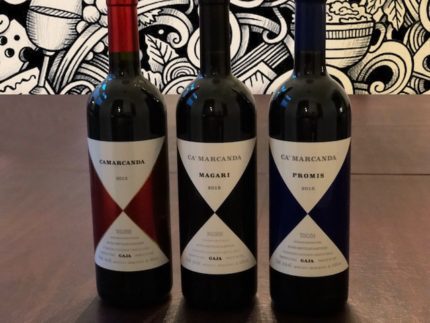 I then moved to our three-week #winestudio program, which focused on the Ca’Marcanda property in Tuscany, located in the famous Bolgheri district in Castagneto Carducci.  Because it took the Gaja family 18 trips to complete negotiations for this historic 250-acre Bolgheri estate, they began to refer to it as “ca’ marcanda,” or the house of endless negotiations.  The focus is Cabernet Sauvignon, Merlot, Cabernet Franc and Syrah vines.

We learned further about the region that Angelo Gaja defined as “learning of color after only working in black and white.”  While the winery was purchased in 1997, it took six years for it to be completed.  Incredibly, the winery is almost invisible if you took an aerial view.  It was crafted to integrate into the earth and landscape.  They even relocated olive trees and have more than 360 trees over 150 years old.  There are two distinct soils – the terre brune (dark earth): mostly loam, mineral content and clay with little limestone located close to the Tyrrheanian Sea or stone and terre bianche (white earth): mostly calcareous clay and sand, rich in limestone and filled with stones and pebbles, which is closer to the hills.

The climate is Mediterranean – with warm days and cool nights.  The mirrored triangles on the label of all Ca’ Marcanda wines represent the view of the famous Cypress Alley leading to the town of Bolgheri that Angelo wanted to mirror.  His vision was to show his passion from place to glass.

Over a three-week #winestudio program, we tried three wines: 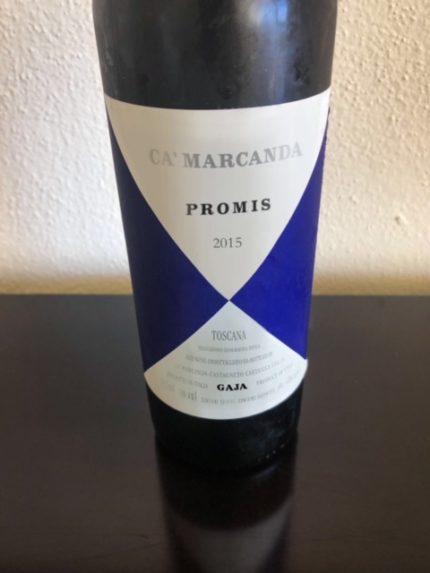 2015 Ca’Marcanda Promis – This wine was created to show commitment, expectation, fulfillment and hope or a promise (same meaning in Italian as well).  It is a blend of 55% Merlot, 35% Syrah, and 10% Sangiovese grown in terre brune soils.  I tasted blackberry, herbal notes, terroir, cigar, cassis and licorice.   This is the entry point for the Gaja Super Tuscan wines. 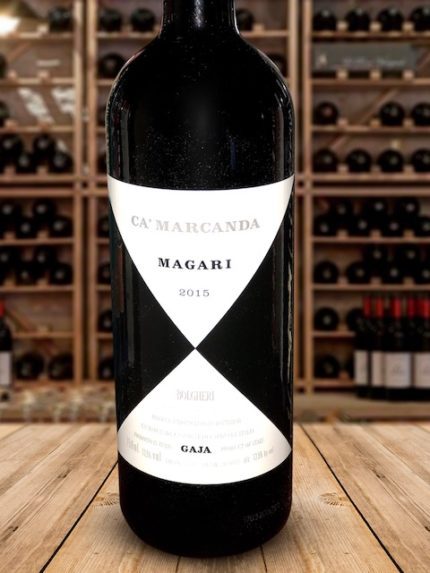 2015 Ca’ Marcanda Magari – Magari means “perhaps” or “if only it were true” in Italian and is often used to express desire, hope and a vision of a bright future. The vineyard blocks are closer to the fertile hillside and are made from fruit grown terre brunesoils.  This is a blend of 60% Cabernet Franc 30% Cabernet Sauvignon 10% Petit Verdot — each aged separately for 15 days.  The 2015, is a shift to more Cabernet Franc with a small addition of Cabernet Sauvignon and Petite Verdot.  I tasted blackberry, raspberry, cherry, espresso, licorice, coffee, Asian spice and herbal notes. 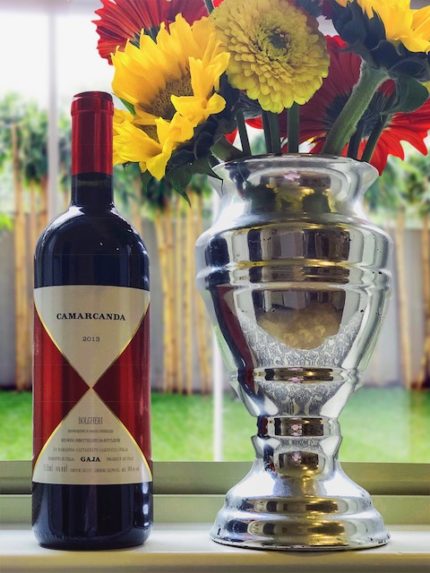 2013 Ca’ Marcanda Camarcanda – a flagship wine made only in exceptional years (there was no 2014), this wine is grown in 100 percent terre blanche soils.  This wine is aged in slightly used barriques for 18 months and it undergoes at least 12 months of bottle aging at the winery before release. I tasted cherries, plum, red raspberries, cloves, stone fruit, olive tapenade, cedar, sandalwood, coffee and spice. This wine had Bordeaux characteristics but demonstrated the Gaja magic touch that combines art and innovation showcasing the vineyard one glass at a time.  This wine is 50 percent Merlot, 40 percent Cabernet Sauvignon and 10 percent Cabernet Franc all made from estate fruit.

I so appreciate Terlato Wines, Gaia Gaja, Ca’Marcanda and #winestudio for teaching me so much about this special family and what it takes to build a legacy in wine and for a region.