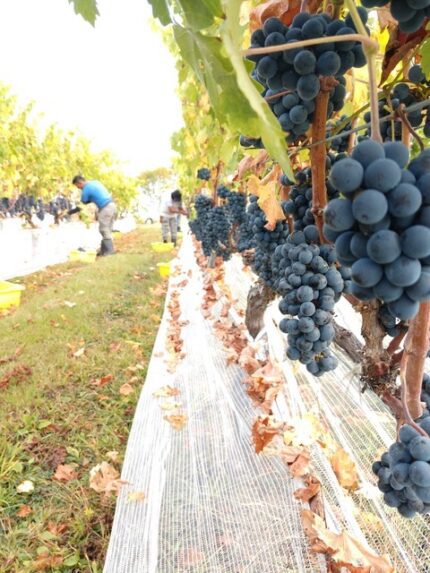 Let’s be franc. Cabernet Franc headlines; it’s not an opening act. While it adds magic as a Bordeaux-style blending grape in conjunction with Cabernet Sauvignon, Merlot, Petit Verdot, and Malbec, the single varietal stands on its own.

Cabernet Franc is reported to have been established in southwest France sometime in the 17th century, when Cardinal Richelieu transported cuttings of the vine to the Loire Valley. On December 4, the anniversary of his death, Lori & Michael Budd of Dracaena Wines started and hosted #cabfrancday to celebrate and educate the power of this grape bringing together winemakers and those who have a love for it. Several writers were invited to participate receiving a bottle of Cabernet Franc in preparation of the chat.

If you want to see the conversation, go to Twitter and follow the hashtag #CabFrancDay. You can also go to the Dracaena Wine page for more information about Cabernet Franc. 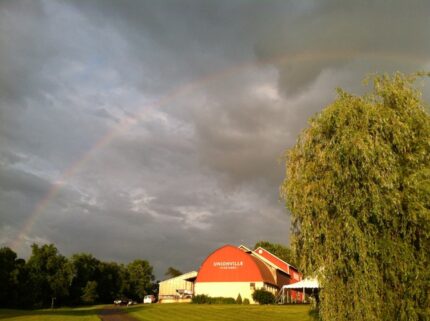 As a part of this day, I was sent a bottle of 2019 Unionville Vineyards Silver Lining Cabernet Franc. The 2018 vintage was reallocated to a rosé due to the wet humid weather and the red grapes did not meet the winery’s high standards. In 2019, the weather was perfect and the ‘Silver Lining’ Cabernet Franc is a wonderful expression of Cab Franc. I tasted plum, blackberry, raspberry and mocha notes.

Unionville’s home vineyard is an 88.7 acre farm that was once part of the largest peach orchard in the United States. The farm was split off as a dowry present when one of the original owner’s daughters was married in 1856. The main house and the oldest section of the winery building were built in 1858. It’s a historic place — George Washington led his troops over much of this area and camped the grounds that now host vineyards.

The property was purchased in 1980 with the goal of saving the farm, returning the land to its fruit growing tradition and starting the Unionville Vineyards. The first Unionville vines were planted in 1987 and the winery opened in 1993. Unionville Vineyards is a collection of four farms with over 300 acres of preserved farmland and they manage and source their grapes from six vineyards. Unionville Vineyards is committed to growing the finest grapes, preserving the pristine rural landscape, the tradition of sustainable land use, the local community and the craft of artisan winemaking.

New Jersey has four designated American Viticultural Areas: Cape May Peninsula, Warren Hills AVA, Central Delaware Valley AVA, and the Outer Coastal Plain AVA. It’s not like New Jersey is just getting started in the wine industry – it’s been growing grapes since the late 1750s. According to the Garden State Wine Growers Association (GSWGA), Great Britain’s Royal Society offered £100 to any colonist who would produce red or white wine ‘of acceptable quality’, meaning the wine was of the same caliber as that being purchased from France. New Jersey Residents William Alexander and Edward Antill raised their hand and accepted the challenge.

NJ’s watershed moment arrived in June of 2012, when a blind taste test between 10 NJ wines and French wines, 5 from Burgundy and 5 from Bordeaux resulted in essentially a tie. The takeaway was that there was no significant difference between a NJ red blend and a first growth Bordeaux; a NJ Chardonnay and a premier cru Burgundy.

Since 2000, the New Jersey wine industry has been growing and now has more than 50 wineries.  I first became acquainted with New Jersey wine and Unionville in November 2018 during Wine Studio , an educational program. We tried some of New Jersey’s premier producers with a selection of sparkling and still wines, including chardonnay, chenin blanc, syrah, and a cabernet sauvignon/petit verdot blend.

Cab Franc Deserves a Seat at Your Table

Francly, my dear, It’s time that we gave a damn. Cabernet Franc and the producers who make them have proven that this is more than a blending grape and produces wines of wonderful character and diversity of climates.