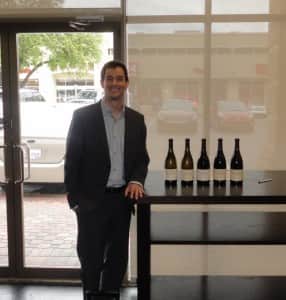 I sat down with Jason Jardine, president of Flowers Vineyards last month at Pogo’s and had an opportunity to taste some of the Flower’s wine portfolio.  I’ve been a fan of the Flowers Pinot Noirs in the past and served them at my daughter’s Baptism several years ago. Jason told me about growing up in Central Valley and how his passion for wine began.  He lived in the tank house behind his grandmother’s house with vineyards everywhere, but not on his family’s property.  At 12 years old, he needed to go to work and did so in a neighbor’s vineyard.  That path eventually took him to Oregon into vineyard management.  He sold that business at 21 and went to Mondavi to learn the art of winemaking.  He later returned to Oregon where he planted and managed Domaine Serene – one of my favorite Oregon wines.

Jason has a belief in sustainable farming, organics and biodynamic wines.  In 2010, he started working for Flowers, which coincidentally is the year the label changed, and is proud to say that all of the wines there are now biodynamically farmed.    You’ll find Pinot Noir, Pinot Meunier,  Syrah and Chardonnay planted.