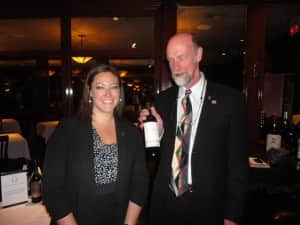 April Cullom, the national brand ambassador and U.S. trade liaison for Ribera del Duero took a private group through a tasting and history of the region at Del Frisco’s.  I was thrilled to see my friend and sommelier extraordinaire, Jennifer Jaco, had landed there.  Look for the wine program to turn into something pretty special.

Ribera del Duero literally means the river-banks of the Duero in the Duero Valley.  Vineyards lie north and south of the river.  Tempranillo is considered “Spain’s noble grape” and is often referred to as the ultimate essence of Spain.  The grape reflects Spain’s sense of place — its terroir, culture, history, and long tradition of wine making.  Tempranillo can also be known as “Tinto Fino” or “Tinta del Pais.”  Other approved blending grapes include cabernet sauvignon, merlot, malbec, garnacha Tinta and albillo, the only white varietal used for rosados.

There are a lot of similarities to the Texas terrior.  There’s extreme sun, only 17.7 inches (450 mm) of rainfall per year and temperatures range from 104ºF (40ºC) in summer and –0.4ºF (-18ºC) in winter. In the summer, the temperatures can range from 100ºF during the day to 50 ºF at night.  Ribera del Duero is prone to sudden storms, unpleasant winds, severe freezing, and hot, dry conditions.  Sound familiar (with the exception of the 50 degree summer nights)?

Vega Sicila, one of the oldest wineries in Ribera del Duero, was founded in 1864 by Don Eloy Lecanda Chavés, who had been studying oenology in Bordeaux, and brought back the French varietals.  The brand was referred to as “Vino de Mesa” (table wine) until the D.O. Ribera del Duero was named in 1982.  There are over 270 wineries in the region. 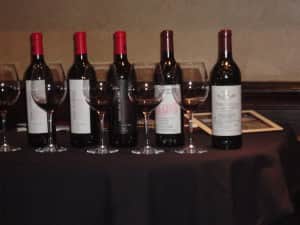 There are several different types of Ribera del Duero classifications that we tasted that day:

Rosado: Rosé wines are fermented without the skin of the grape and are available shortly after the harvest. Very fruity, strawberry and light.  I’m not a huge rosé fan, but if you are, you should give these a try.

Cosecha: Which may be referred to as Joven Roble or Joven Barrica, are used to refer to wines aged for a few months and released after harvest.  Lots of berry and meant to be consumed quickly.

Crianza: Aged for 24 month with a minimum of twelve months in oak barrels, these wines are released two years after harvest.  More depth with lots of berries.

Reserva: Aged three years with a minimum of twelve months in oak barrels, this wine can be sold the third year after the harvest.  After twelve months in barrels, the wines are bottles and stored in cellars until release.  This was a very jammy wine style with leather, tobacco and oak.

Gran Reserva: These wines are only made in select vintage years.  They are aged sixty months, with twenty-four months in oak barrels.  These are also stored in the cellar before release and the first release is five years after the harvest.  Lots of complexity to these wines with dried fruit, spice, earth, cedar and terrior.   As April said, “this was a powerfully elegant wine that was well balanced and reflected its sense of place.”

Here’s a list of some of my favorite wines:

I look forward to hearing more about your favorites.