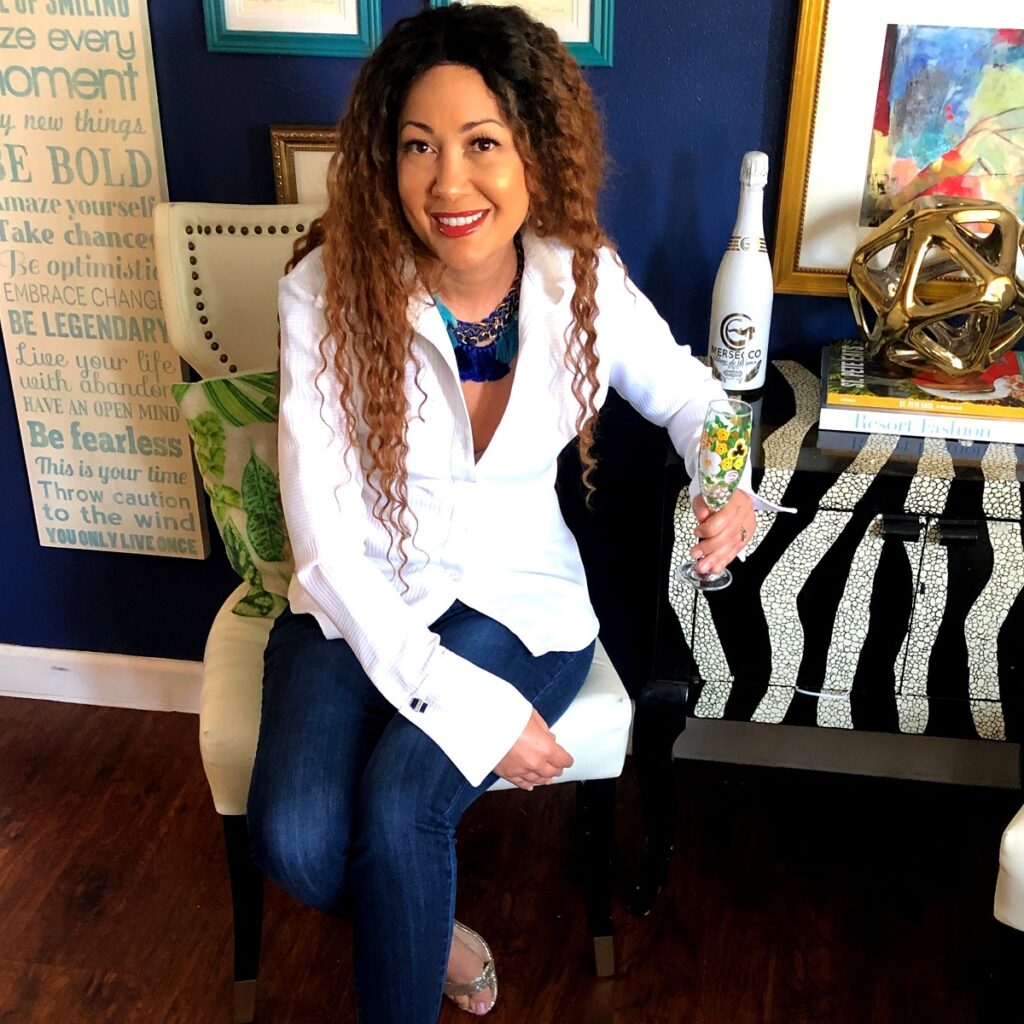 Desiree Noisette is what you would call a Renaissance women.  She’s successfully been a lawyer, a retail business owner, a designer and is now known for operating Florida’s first black-owned wine business, Mermosa Wines.  Throw in the titles of wife and mom and you have a multi-talented entrepreneur who works tirelessly to rethink industries and make them fun.

She came to the  crossroad in her life when she practiced construction law and it was time to decide if she was choosing the track to become a partner.  Desiree told me, “ I was always arguing or thinking of arguing.  It seemed that doing that the rest of my life was not the path for me.”

She did a self-evaluation of what she wanted to do in her career.  “I thought about a business that needed turning on its head.  What is worse for a woman besides swimsuit shopping,” she said.  “I thought I could make that a fun experience – why not work on a business that could help women of all shapes and sizes feel better in their own skin?  And let’s create a party atmosphere with appetizers and drinks.”

That led to the creation of a retail outlet designed to make swimsuit shopping fun.  She wanted it to be more of a celebration – think cocktails, girlfriends and shopping with confidence.  In year two, mimosas became part of the experience in her store and she started experimenting with pre-mixed mimosas.  The current options on the market were not good and Desiree realized there was room for a much better product. “What I tried was so surgery and tasted artificial.  I knew we could do better,” she said.

She started experimenting with natural fruit juices and low sugars in wine that would be differentiated by taste.  So how did a complete newbie find her way in the world of wines?  She asked the right people, the right questions.  And she researched everything she could.  One of those people was Joe Dobbes from Dobbes Family Estate, who invited her and her husband to his house.  They realized they had a kinship and she invited him to come and work with her on fermentations.

Desiree set up the lab and her guests served as her target market for refining her blends.  In 2018, she launched the Mermosa brand, becoming first black-owned women wine brand with Mermosa Bubbles and the world’s first winery boutique.  She quickly found out in 2020 that she had a bigger calling beyond a retail store and that she could shift from a direct to consumer model to national distribution.  That didn’t come without risks.  Her family sold her house and moved in an apartment to finance the deal.

The Mermosa brand is inspired by a love story that was so powerful that it broke the chains of slavery.  Desiree told the story about her ancestors that came seven generations before her.  Celestine was a Black Haitian woman, and Philippe Noisette, was a white French botanist, who married in the late 1700s.  The story included Philippe claiming ownership of his wife and children to keep them out of the slave trade in South Carolina.

Philppe is credited with the Noisette Rose, which showcased his gardening expertise and legacy.  When he died in 1835, he left his money to Celestine and their children. Celeste had two choices – leave the South or negotiate her way to freedom. She persevered and became a free woman.

Mermosa was created to celebrate as a tribute to her “feeling free in her sea.”  Desiree described it by saying, “Mermosa is inspired by our family’s original mermaid, Celestine Noisette, whose siren-song set her free and inspired generations of strong voices and unstoppable spirit that is everyone’s inner mermaid.”

The visual experience of the bottles are designed to be fun and differentiated from a sea of bottles for the female consumer.  And looking at distribution and sharing the “sip and shop” experience continued to build affinity for the brand.  The tagline,    “The Official Wine of Boats, Brunch & Beaches” is a perfect fit. 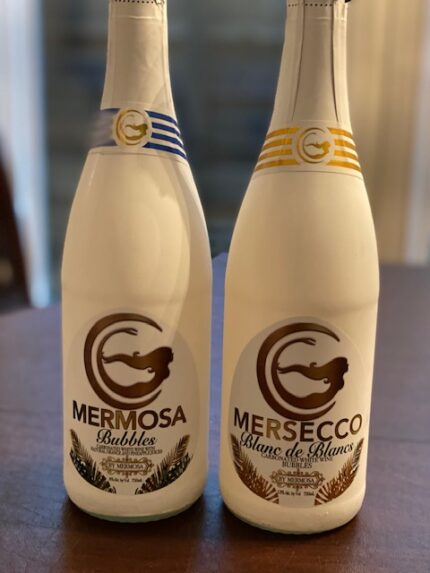 We tried two bottles during our tasting:

Mersecco Blanc de Blancs – this is a blend of Pinot Gris and Chardonnay with lower calories, carbohydrates and no sugar.  It’s crisp, dry and an approachable sparkling wine.

Mermosa Bubbles – this was like tasting a fresh mimosa with sparkling and a combination of orange and pineapple juices.  It was refreshing and there was no cloying aftertaste of the usual pre-mixers. This is a perfect way to make easy brunch cocktails.

We talked a little about the current situation with black-owned wine businesses.  Phil Long, president of the Association of African-American Vintners, stated in a recent story that there are more than 8,000 wineries nationwide, but only one percent are black-owned.  Of that number, the percentage of black, women-owned businesses are more dismal.  Desiree persevered by reaching out to retailers and found that suddenly doors swung open after the George Floyd and the beginning of the Black Lives Matter movement.  She found credibility and validation as retailers listened to a new voice that was reaching a new consumer and palate.

Currently the bottles retail for $14.99 and each 2-pack of cans sells for $9.99.  Mermosa is available in independent grocery stores and retailers in Florida, Texas, South Carolina, and Georgia.

It’s clear that Desiree is a trailblazer who is committed to helping other women in the business.  As she mentioned, “it’s good to be the first, but I better not be the last.”