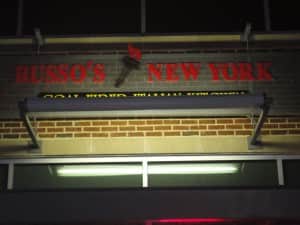 As a part of my ongoing and often sporadic “Can You Get a Decent Glass of Wine from a Chain Restaurant” series, I was invited to Russo’s Coal Fired Italian Kitchen, a chain of more than 25 Italian restaurants.  I’d never been to Russo’s before and so I made the ride to Richardson, TX, with my friend, David, who graciously agreed to be a part of the taste experience.

This series started after I told my husband that I did not want to meet him for drinks after work at Mi Cocina due their very pedestrian wine list.  While I have been pleasantly surprised  with the results of this series (I’ve had two good experiences at Cafe Express and The Olive Garden),  I wasn’t sure what to expect from a pizza and pasta chain.  Again, I found that I need to check my pre-conceived notions at the door.

We were warmly greeted by Chris Demers, director of operations for Russo’s, who began talking passionately about the wine program.  Russo’s offers twelve wines by the glass — one prosecco, five whites and six reds — and ten of those rotate monthly.  All of these wines retail for $7 for a 5 oz. pour.  When we visited the restaurant, there were some other specials including Ferrari Carano for $6 and Masi for $9.  Demers has a background of helping bring The Wine Loft, a national wine bar concept, to fruition so when he came to work at Russo’s he immediately overhauled the wine program.

He told us that, overall, Richardson (Dallas) wine drinkers were adventurous and while he needed to have some traditional Italian Chianti’s and Pinot Grigio’s on the menu, people were also willing to try Argentian Malbec and Chilean Sauvignon Blanc.  After checking his website, we realized the list Demers has is different from the Russo’s wine list.  That is by design.  Half of these wines aren’t available via retail as he’s trying to encourage a positive adventure in wine for his diners.  It is paying off — since he overhauled the wine program, sales are up over 50 percent.  There has only been one exception — Mark West Pinot Noir.  He tried to replace this crowd favorite and quickly realized it was a sacred cow. 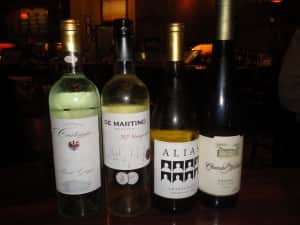 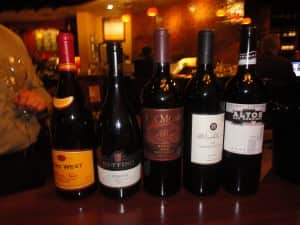 Here’s the line-up that we had the night of our tasting: 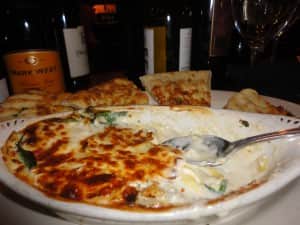 We also got to sample a few of the menu items, prosciutto with buffalo mozzarella, which I didn’t try because I’m allergic to pork, and the spinach and artichoke dip, which was off the charts good.  My advice for you is to come from 3-6 for Happy Hour or on Wednesday’s when wines are $5.  Order the dip and the Blackburn and savor the fact that not only can you get a good glass of wine from a chain, but you have found a cabernet that is a fantastic price to taste ratio.