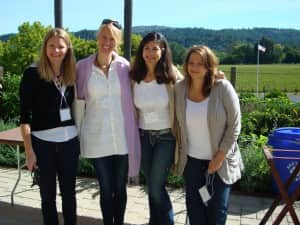 We met early on a Thursday morning at DFW Airport.  As usual, I pushed the limits of proper airport arrival times and made my friends sweat a little if we were going to make the flight.  Luckily I had our trusted lead foot cab driver in play – because that’s the way I roll.  We were on our way to the annual Women for Wine Sense conference and  arriving early to taste wine on Thursday and Friday.

Our flight to Sacramento was uneventful (more on the way home in a later post). We arrived in Napa a little before noon and went to find our rental car.  A little over an hour later the four of us and the Buick were at Gott’s Roadside, formerly known as Taylor’s Refresher, with an ahi burger and a glass of wine in hand as we waited for the others to arrive.  This is living!  Unfortunately I made the choice to have some of the sweet potato fries which set off my downward spiral of not so healthy eating.

We went to find our hotel at the Napa River Inn and Jen, my roomie, and I received our room assignment in the “bunker.”  While many of the Napa River Inn rooms had cute little balconies, flowers and a scenic view of the river, let’s just say that the Alamo might have been fought in ours. Although our men of Texas might have surrendered as we could hear the water dripping from the tub upstairs all night.   But, hey, who actually sleeps at their hotel in Napa anyway – it’s all about the wine.

And speaking of wine … ten of us made the journey to Rudd for our first tasting.  After a beautiful tour of their gardens and facilities, we got to sample.  We started with the 07 Rudd Russian River Valley Chardonnay.  It had a big lemon taste with notes of tropical fruits and floral.  It was made in a French style and retailed for $65.  Next came the Sauvignon Blanc from Mount Veeder which had a touch of semillon added.  At $50, I tasted guava, a little spiciness and it was made in the white burgundy style.

We then moved on to the big reds and the bigger price tags.  The first was the Rudd Crossroads Cabernet, their second label cab.  Big berry, a touch of tartness and currant were the things that I tasted.  The next wine was the Oakville Estate Propriety Red at $125.  A friend described this as “cut with a fork good.”  I concur.  Finally, we tasted the group favorite – the Edge Hill Mixed Blacks, which was a blend of five varietals.  I tasted vanilla, chocolate and it had a great balance.  For $100, this was my personal favorite of all the reds.

Our next stop was Ad Hoc in Yountville.  As always, our dinner was amazing and they accommodated the vegetarian and a few others who preferred fish over meat.  We brought several bottles of the Edge Hill Mixed Blacks which wonderfully topped off to the meal.  At that point, the girls on Central Standard Time needed to go back to the bunker and get some rest.