Those of you that know me well know that I am not a big fan of the oversaturation of tattoo-oriented art with brands like Ed Hardy. I drew the line when I saw kid oriented tattoos in the gumball machine at the local grocery store. I actually think I was on one of my rants when I got the direct message from Cliff Raven wines asking if I wanted to try its wines. You see, Cliff Raven was one of the early pioneers in tattooing and the first to incorporate the Japanese art of Irizumi or full body tattoos with American influences. But could the Michelangelo of Tattoos have a good wine? Granted – the winemaker behind the project is Hector Durigutti, who is well known as one of the most sought after winemakers in Argentina and noted for bringing Malbec to its current popularity.

A few weeks later, two bottles arrived in the mail and a few weeks after that in the midst of Dallas Blizzard 2011, I asked some friends to come over and sample them with me. We started with the 2010 Torrontes from Argentina. I smelled almost a sweet floral smell upon first swirl, but it had a dry finish with lots of stone fruit. Very nice and a bargain at $14.99. 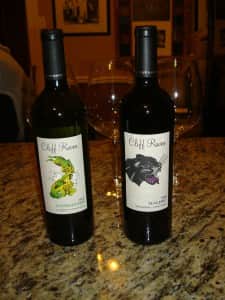 Our next wine was the 09 Malbec, which was the absolutely star of the snowy night and at $14.99 earns a place on my “must try” list of wines under $15 wines. This one was velvety “like buttah” and was a deep red color. Lots of plum, chocolate, red fruit and I loved the balance.

Once again, I learned that you can’t judge a book by its cover and while I probably am not going to advocate for a tattoo of my own, I am a fan of Cliff Raven wines. The wines just gained online distribution, so to check them out, go to http://www.bevmax.com.