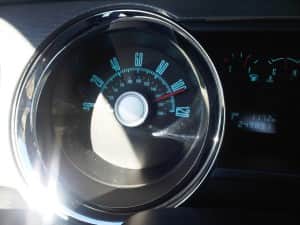 This was the photo that I got from my lead footed husband as he made the solo drive from the Portland Airport to join me on a tour through Prosser, Red Mountain and Yakima.  I was lucky enough to have one of the top experts, Margot, and her husband, Dave,  show us Washington “wine o’clock” style.

You see, John didn’t join me until after #wbc10 was over. He’s a bourbon boy from the South and while he has a strong appreciation of wine and a collection that reinforces that point, seven days of wine tasting would render him to a state where he would want to poke his eyes out with a fork.  For the sake of our marriage and my enjoyment of the experience, he arrived late on Sunday. 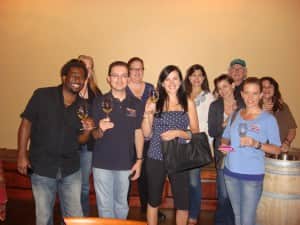 Unfortunately he missed out on some wonderful experiences.  Our first stop was family-owned L’Ecole. The name, L’Ecole Nº 41 is French for “the school”.  The winery is located in district 41 in historic Frenchtown, a small community outside of Walla Walla that was named for the many French Canadians that settled there in the early 1800s.

We arrived at the converted schoolhouse that serves as the tasting room and were greeted by Jamie, a fun new friend who hosted us for a fantastic vertical tasting of library wines.  We began with a refreshing glass of the 08 Estate Luminesce ($19) that I loved, but alas, it was completely sold out.  We then tasted the 99, 03 and 07 Apogee from Pepper Bridge Vineyard and the 03 and 07 Estate Perigee from Seven Hills Vineyard.  I personally loved the Apogee – especially the earlier vintages that tasted of earthiness, black cherry, cassis and notes of chocolate.  The evolution in the glass was noteworthy and I left with a case of my own to taste test in the future. 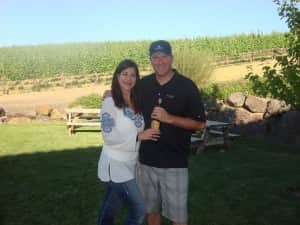 Our next stop was to Va Piano Vineyards to meet Winemaker Justin Wylie.  Its motto: “Chi va piano, va sano e va lontano.” The translation is “He who goes slowly, goes safely and goes far” – an old Italian saying and the winery’s approach to living. This recommendation came from Greg Kassanoff, who owns Pioneer Wine here in Dallas.  We started with two Brunos Blend I and VI wines, one Sauvignon Blanc and one red blend as well as the Semillon.  Father Bruno Segatta, who Justin met during his time at Gonzaga University, is an artist and selfless priest.  Father Segatta inspired Justin to give back to the community. When the Bruno blends are sold out, Va Piano donates a portion of the proceeds to a charity of Father Bruno’s choice.  We tried two Syrah’s – the 07 Syrah and 08 Estate Syrah, which were inky black, spicy and fabulous.  But it was the 07 Cabernet that made me a card carrying member of Va Piano’s wine club.  At $38 a bottle, it rivaled some of Napa’s heavy hitters currently in my cellar.  Let’s just say that I cancelled my Far Niente membership because I liked it that much (the rule in my house is that if I add a wine club, I must cancel a wine club – actually my husband made up this rule after one particular Visa bill).

The next day, we made a brief stop at Airfield Wines where my favorite wine was the Aviator ( $30). It was a big Bordeaux style blend and since my cousin is in process of finalizing his clearance to be a fighter pilot, I loved the history of the winery.

The next day we headed to visit Alexandria Nicole Cellars.  Because Margot and Dave were wine club members, we were given VIP treatment and access to the back room, where we tried more than 16 wines on their tasting list – we even showed restraint as they have 21 varietals.  My favorites included the 07 Jet Black Syrah, 09 Rousanne, 08 Quarry Butte (ah Quarry Butte…), 07 Cabernet and 08 Crawford Viognier.  We also had the chance to sample some older vintages – the 03 and 05 cabernets and merlots from Alexandria Nicole’s enomatics system.  Again, the evolution in the glass and the changes over a two-year period were notable.

Then it was time for lunch.  I was excited to finally meet Scott who has been a long-time friend on Twitter, but I wasn’t prepared for the red carpet that was rolled out by my new Washington friends.  We went to eat at Tuscany and were met by Coop, Sara and Kevin.  Coop brought a bottle of his not yet released 08 Pinot Gris and it paired perfectly with the delicious food.

Mark your calendars for the debut of Cooper Wine Company’s Red Mountain grand opening on Sept. 11.  If his Bordeaux-style reds rival the Pinot Gris, you won’t be sorry. 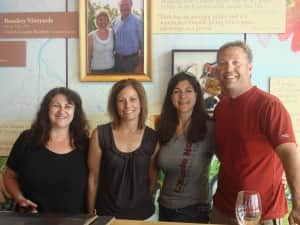 We left Tuscany and I had the chance to experience Fidelitas Wines in Red Mountain.  We originally planned to visit several wineries on Red Mountain, but were drawn in by Charlie Hoppes’ big red wines at Fidelitas Wines along with the hospitality of Marilyn and Cindy.  Let’s just say that another case of wine now has a home in Dallas that includes the 07 Red Mountain Cabernet Franc ($40), the 07 Jaguar red ($20), 2007 Champoux Vineyard Cabernet  ($60) and 07 Red Mountain Red ($50). 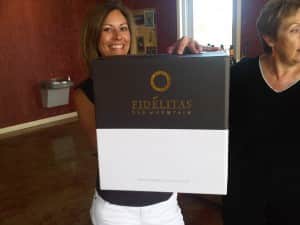 P.S. Here is a photo of the not debuted yet packaging…

Our last and final stop was Sean Gilbert at Gilbert Cellars in Yakima where we tasted an array of reds, whites and a Rose’ of Mourvedre paired with cheeses, olives and Marcona almonds.  While I enjoyed every one of his wines, it was the 07 Cabernet Sauvignon ($28) and 07 Cabernet Franc ($32) that will be joining us in Dallas once the Texas heat has diminished. 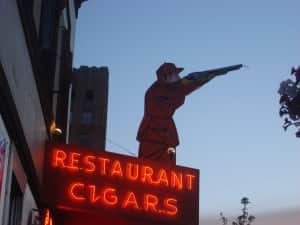 Sean also talked us out of our dinner selection and sent us to an unmarked sports bar with a hunter complete with a scoped rifle as the signage.  Thankfully we trusted him and enjoyed a great dinner with a bottle of Gilbert Cellars’ Malbec.  We ended the evening hanging out with Margot and Dave in their room where we told stories and toasted a wonderful trip with a few special favorite wines.